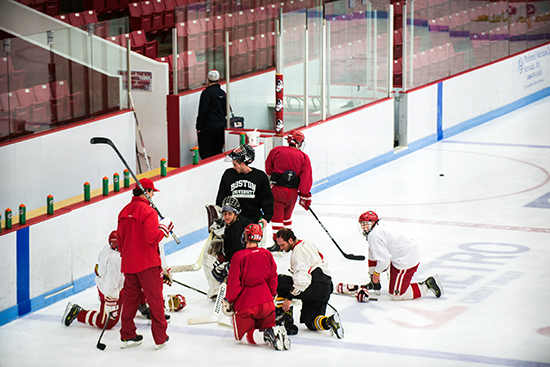 The BU men’s club hockey players have plenty of reasons to celebrate this season: not only are they marking their 10-year anniversary, but for the first time, they’re heading to the American Collegiate Hockey Association Division 2 National Tournament, this weekend at the Ice Line Quad Rinks in West Chester, Pa.

The team—popularly known as the Red Dogs—will take on Lindenwood University–Belleville Friday, March 18, the University of Utah Saturday, and Miami University Sunday. If the Red Dogs advance past the group stage, they will play the winner of another pool in the semifinals on Monday. Should they win that game, they will compete in the championship Tuesday, March 22. All games are in West Chester.

Making the tournament is a major accomplishment for the relatively young BU club. Only 16 of the 200 teams in the division qualify for the nationals. And the BU men know that despite the achievement, they enter as underdogs.

“While there are no seeds, we would definitely be ranked pretty low—anywhere from 14 to 16, to be honest,” says forward Michael Minarczyk (Questrom’17). “But that’s what comes with the territory. It’s our first time here, and we’re ready to make some noise, no matter what people think of us.”

The club team was formed 10 years ago. They started out as the Red Dogs, and the name stuck. Early on, players had to use their own money to rent ice rinks for practice, and they’d play just about anyone willing to compete against them. A turning point came four years ago, when the team became an official BU club sport.

“Some teams wouldn’t even play us,” recalls assistant coach Kyle Stephenson. “It was frustrating. But as an officially recognized club sport, we got the opportunity to play everywhere. The trainers and support are great, but the new opportunities are what really made it all worth it.” To pay for their trip to this weekend’s tournament, the players turned to crowdfunding, launching a campaign on GoFundMe. They’ve raised $5,000 to help pay for buses, hotel accommodations, and meals. The campaign remains active through today, March 16.

At a recent practice, head coach Greg Carr was exhorting his players to move faster and work harder. “They always push us,” says forward Dan Sutterman (Questrom’16). “But I think everyone pushes everyone to be better. As teammates, we all push each other. We’ve been doing that all year, and it’s been one of the reasons why we’ve been so successful.”

Getting to the nationals hasn’t been easy. The team dropped the first game of the year 6-1, but was able to regroup, rattling off four consecutive wins, one a 6-1 victory over crosstown rival Boston College. Next came four losses in five games, then six wins in a row. The Red Dogs closed out the regular season 11-8.

After a 3-0 defeat in the first round of the Northeast Collegiate Hockey Association playoffs, Carr gathered his seniors, reminding them this was the last time they would play competitive hockey. “I just left it up to them,” he says. “I even told our senior goalie he would be starting in regionals. I told the seniors they had to go out there and play and win. I challenged them, and they definitely rose to the challenge.”

Led by forwards Matt Fineberg (Questrom’16), Lucas Esposito (CAS’16), and Taylor Parkinson (Questrom’16), BU swept its three opponents in the Northeast Regional Tournament, outscoring them 16-5 and landing a spot in the national tournament. Carr says it was the best he’s ever seen his seniors perform. “They played tremendously,” he says. “I couldn’t have asked for a better performance from them. That line, of Fineberg, Espo, and Parker, has been our best offensive line for years, and they really stepped up when we needed them.”

In addition to boasting a large number of veteran players this season—the team carries 9 seniors on its 25-man roster—players attribute much of their success to their camaraderie and their rigorous schedule. They meet four or five times a week: two practices, a team workout, and then one or two games. Most of the club team players played AAA hockey during high school, the highest level of minor hockey—a testament to how competitive it is to make the team.

“We have a lot of great guys here,” says defenseman Jack Faso (Questrom’17). “Every guy on the team contributes. We even do Secret Santa and things like that. It’s been a really fun ride for everyone.”

As much fun as it’s been, the players say that a title would take them to another level.

“Winning a national championship would cement our program among the elite club teams in the country,” says Minarczyk. “It would be the perfect ending to an already great season. We couldn’t imagine a better way to send off our seniors than by shocking everyone and winning the whole thing.”

The Boston University men’s club ice hockey team will play Lindenwood University–Belleville in the first round of the American Collegiate Hockey Association Division 2 National Tournament on Friday, March 18, at 3 p.m., at the Ice Line Quad Rinks, 700 Lawrence Dr., West Chester, Pa. The team will play the University of Utah Saturday, March 19, at 3 p.m., and Miami University of Ohio Sunday, March 20, at noon. Find a livestream of each game by clicking the school playing the game. The four top teams advance to the semifinals Monday, March 21, with the two winners meeting in the championship Tuesday, March 22, at noon.