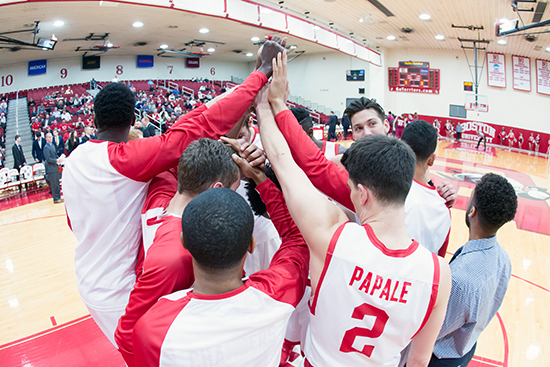 With just one regular season game to go before the start of the Patriot League Tournament, the BU men’s basketball team, at 17-13 overall, finds itself  third in the conference standings. But rankings and records only hint at the kind of grit and tenacity the Terriers have needed to call on to get to this point.

A string of injuries has plagued the Terriers this season, causing nine players to miss at least one game. Starters Cedric Hankerson (Questrom’17) and Justin Alston (CGS’14, SHA’16) succumbed early in the year to season-ending injuries, and a left ankle injury has sidelined cocaptain Nathan Dieudonne (CGS’14, SAR’16) for the last four games. He is expected to play in the Patriot League Tournament, however, which starts next Thursday.

But instead of allowing themselves to be distracted by these challenges, the team has shown remarkable resilience, winning seven straight games before losing to second-ranked Bucknell last Saturday. Head coach Joe Jones credits much of that success to the team’s two senior leaders.

“Our seniors have done an amazing job of exemplifying who we want to be,” Jones says. “Both Nathan Dieudonne and John Papale have been selfless. We talk about communication, respect, enthusiasm, and toughness, and those two exemplify our core values. I think our guys have just followed their lead.” Papale (CGS’14, CAS’15, MET’17) started in all 30 games last season, setting a school record of playing 37 minutes per game.

Overcoming this season’s obstacles has been a team effort. Upperclassmen have risen to the occasion, notably guard Eric Fanning (CAS’17), who leads the team in scoring, with 14.8 points a game. Younger team members have also shattered expectations: point guard Kyle Foreman (CAS’19) is the team leader in steals, with 34, and has won Patriot League Rookie of the Week four times. To put things in perspective nationally, BU is the only NCAA Division 1 team to have 13 players score 10 or more points in a game this season.

“Everybody on the roster has stepped up at some point, and that’s the beauty of this team,” says Jones. “We have had different players step up, and it’s been a different guy almost every night.”

Players are quick to say that Jones is the reason they haven’t let themselves become distracted in the wake of so many injuries. “Coach Jones does a great job of just believing in every one of us and keeping us confident,” Fanning says. “He keeps us focused on the things we can control.”

While the offense has come from different players nightly, defense has been a collective effort from all team members and a major reason for BU’s success of late. During the recent seven-game win streak, the Terriers allowed 68.3 points per game, 4 points below their season average at the time, and throughout the season they’ve held opponents to 49.2 percent shooting from the field.

“It all starts and finishes with our defense and how hard we play,” says Jones. “The guys have done a great job of picking each other up and playing for each other.”

The Terriers return to Case Gym one last time tomorrow, Saturday, February 27, to face Holy Cross, before the postseason begins. The team will honor its two seniors, captains Papale and Dieudonne, before the game as part of Senior Day.

“During the season you’re so focused on winning games that you don’t really step back and look at your career,” says Papale. “It will be a nice moment to be recognized and share with my family.”

The Terrier men’s basketball team squares off against Holy Cross tomorrow, Saturday, February 27, at noon, at Case Gym, 285 Babcock St., Boston. Tickets are $12 for the general public, $7 for BU students, faculty, and staff, and free for students with a BU sports pass. Purchase tickets here or at the Agganis Arena ticket office, 925 Comm Ave.

The men’s basketball Patriot League Tournament begins Thursday, March 3, at a site to be determined.

Men’s Basketball Perseveres Despite String of Injuries
0
share this