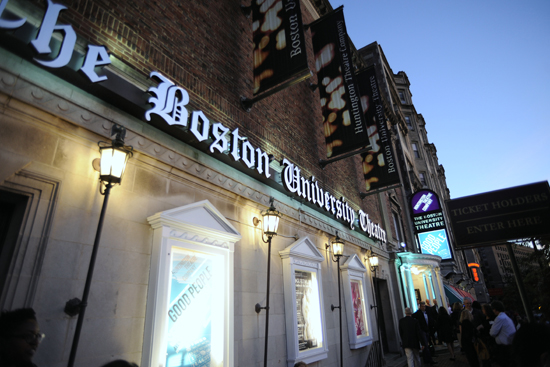 After 62 years of ownership, the University has sold the BU Theatre. Photo by Paul Marotta

The BU Theatre, which the University put on the real estate market in October, is under agreement to be sold for $25 million to an investment group that is working with Boston-area developer John Matteson. The sale includes the 890-seat theater at 264 Huntington Avenue and the adjoining buildings at 252 and 258 Huntington Avenue.

Gary Nicksa, BU senior vice president for operations, says the money from the sale of the three buildings will help pay for the construction of a new performance studio space on the Charles River Campus, part of an improvement of College of Fine Arts facilities valued at more than $50 million. The new facilities, which will include a 250-seat studio theater and production spaces in the 820-846 area of Commonwealth Avenue, are planned to open in fall 2017.

Matteson says he is currently talking to the Huntington Theatre Company about the possibility of its continued use of the property after the June 2017 date. “The conversation with the theater group, with assistance from City Hall, is going very well,” he says. “We are fans of the theater. We would like to make sure that we maintain a theater on the Avenue of the Arts, as that part of Huntington Avenue is designated.”

Boston University has owned the theater for 62 years, and has worked in partnership with the Huntington Theatre Company since its beginning in 1982, providing space and financial support valued at more than $40 million. The adjoining buildings have given BU theater students a place to work with theater company staff to create scenery, props, and costumes.

Jean Morrison, University provost and chief academic officer, says the decision to sell the buildings came down to determining the best way to serve BU’s theater students and faculty, who are currently separated from their acting, fine arts, and music colleagues on the Charles River Campus whenever they are working at the theater.

The University’s decision to sell the theater, which ended the long relationship between the University and the highly regarded Huntington Theatre Company, coincided with an announcement last fall that Emerson College was considering repurposing the historic Colonial Theatre downtown, and was met with concern by many in the Boston arts community.

In October, a statement issued jointly by the University and the Huntington Theatre Company noted that both institutions have agreed to be thoughtful and supportive of each other as they go their separate ways.

CFA plans to continue to stage large and small productions traditionally performed at the BU Theatre and its Lane-Comley Studio 210 through the 2017 spring semester. Morrison says that while the University has no plans to build a new proscenium theater, its fully staged operas, musicals, and other major shows will be performed at proscenium stages around Boston through rental agreements similar to those of the School of Music’s biannual performances at Boston’s Symphony Hall.

There are 8 comments on BU Theatre, Adjoining Buildings Sell for $25 Million