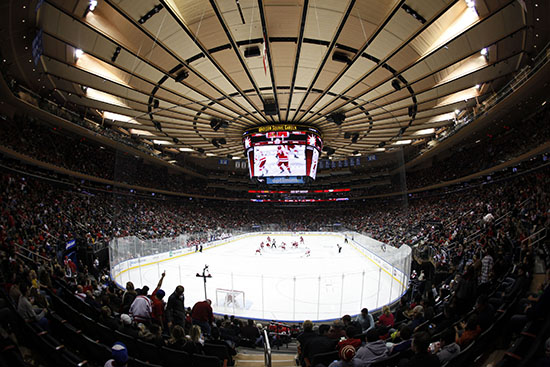 BU is 3-0-1 so far in Red Hot Hockey bouts. The team is hoping for another win against Cornell on Saturday, November 28. Photos by Scott Levy/MSG

In the fifth edition of Red Hot Hockey, the BU men’s ice hockey team is traveling to Madison Square Garden to face off against the Big Red of Cornell on November 28. The biennial event was first launched in 2007.

“With such a strong alumni base in New York City, this has kind of turned into our bowl game,” head coach David Quinn (CAS’89) said in an interview on BU Parents Program Radio last week.

The matchup between the powerhouse hockey programs, nicknamed Red Hot Hockey because the school color of both teams is red, commenced eight years ago, with the Terriers claiming a 6-3 victory. To date, BU is 3-0-1 in the event, beating Cornell in 2011 and 2013, after skating to a tie in 2009.

During their last head-to-head, in 2013, goalie Matt O’Connor (Questrom’15) recorded 37 saves to lead the Terriers to a 3-2 victory in front of a sold-out crowd.

“It’s a great weekend for current students and alumni,” says Quinn, who was an assistant coach under legendary head coach Jack Parker (SMG’68, Hon.’97) during the first Red Hot Hockey game in 2007. “It’s a great opportunity to meet alumni and get to know people that enjoy BU hockey as students and hockey fans.”

The two schools were competitors for decades as members of the Eastern College Athletic Conference. Each team won five ECAC titles and between them took five national championships from 1967 to 1978. In 1984 BU left the ECAC to join Hockey East. The Red Hot Hockey event offers a unique opportunity for student-athletes and alumni alike to relive this storied rivalry.

“We’re big, but not as big as they are,” says Quinn about this year’s Cornell rematch, his second since becoming head coach in 2013. “If we’re going to be successful, we need to use our speed and skill to keep the game at a pace.”

The Terrier men head into Saturday’s game with a record of 7-4-2 after splitting their two-game series with Michigan at Agganis Arena over the weekend and taking down Bentley 3-0 at Agganis Tuesday. The team is looking to earn its 31st Beanpot title and a return to the NCAA National Championship game this year, after narrowly losing to Providence 4-3 in the 2015 Frozen Four final.

“It’s been a fun year so far, but I think our best hockey is ahead of us,”  Quinn says.

For the players, Saturday’s game is a rare opportunity to play at the iconic Madison Square Garden. “In 2013 it was my first time at MSG, and it’s a pretty special building, so being able to go back again this year is really exciting,” says senior captain Matt Grzelcyk (COM’16). Grzelcyk is one of 11 upperclassmen making a second Red Hot Hockey appearance.

For 15 players on the team, it’s their first Red Hot Hockey game. “It’s going to be an unbelievable experience playing in an NHL rink,” says Jordan Greenway (CGS’17). “Playing in front of all of our fans in New York will be awesome.”

The many BU alumni in the greater New York area always come out strong to cheer on the Terriers. The BU Alumni Association and the Friends of BU Hockey are sponsoring a Pep Rally at Madison Square Garden before the game, at 6:30.

The BU Terriers take the ice against the Cornell Big Red this Saturday, November 28, at 8 p.m., at Madison Square Garden. Tickets range from $25 to $300 and can be purchased online through Ticketmaster. The BU Alumni Pep Rally begins at 6:30 p.m. in the Delta 360 Room at MSG. Tickets to the rally are $15 and include a food/drink voucher, and may be purchased here.