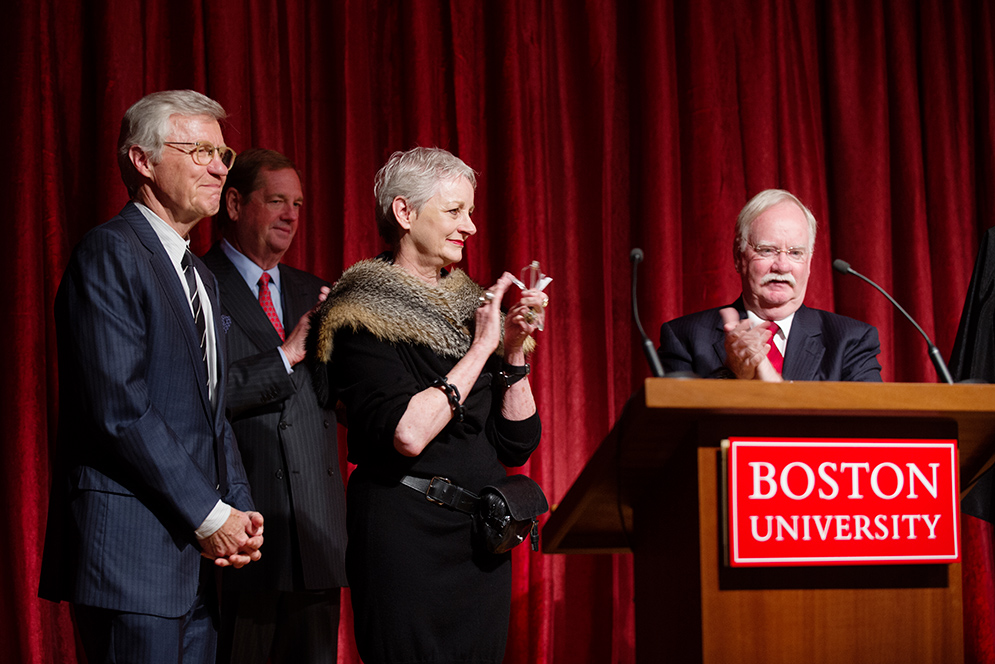 Allen Questrom (Questrom’64) (from left), Robert Knox (CAS’74, Questrom’75), chairman of the Board of Trustees, Kelli Questrom, and President Robert A. Brown at yesterday’s announcement of the Questroms’ $50 million gift to the University, given through their Allen and Kelli Questrom Foundation. The gift, the largest ever received by BU, renames the School of Management the Questrom School of Business. Photo by Jackie Ricciardi

Boston University trustee Allen Questrom (Questrom’64), retired chief executive officer of several of the nation’s largest department and specialty stores, and his wife, Kelli, have given Boston University $50 million, the largest gift in University history, through their Allen and Kelli Questrom Foundation. The gift, announced by President Robert A. Brown at a naming ceremony at the school on Monday, includes $10 million given in 2012, and renames the School of Management the Questrom School of Business. It will be used to endow 10 faculty chairs and enable planning to establish a new graduate program facility.

“We are enormously grateful for this magnificent gift,” says Kenneth Freeman, the school’s Allen Questrom Professor and Dean. “Allen Questrom is a retailing industry icon, having restored to profitability many companies during his turnaround career, while demonstrating the highest integrity, exceptional leadership, and tireless service in support of others.” The endowed deanship and professorship were given by the Questroms in 2007.

“The gift is transformational, enabling us to attract outstanding faculty widely recognized for excellence in research and teaching who will contribute meaningfully to our mission of educating ethical, innovative business leaders,” Freeman adds. “With the Questroms’ generous support, we will be able to accelerate our transformation and better prepare the next generation of bold leaders.”

“This is a singular moment in the history of the school and the University,” says Brown. “The gift will both propel the school on the path of increased impact and quality and will forever associate it with the name of one of the most distinguished businessmen in America and one of Boston University’s most distinguished graduates.”

Brown says the 10 new professors will enhance the research and teaching of the Questrom School of Business, “while shifting a portion of the cost of the salaries and benefits of these distinguished faculty members from tuition to the endowment…the Questroms have raised our sights on the impact of philanthropy at Boston University.”

The Questroms’ donation also provides seed funding for the school to study the addition of new 60,000-square-foot classroom space that will connect to its existing building. Since moving into its current home in 1996, the school has expanded significantly. The building was originally designed to accommodate 1,700 students, but now welcomes 3,500 undergraduate and graduate students.

The gift comes two and a half years after BU announced its first-ever comprehensive fundraising campaign, with a target of $1 billion. BU is the first university to set a $1 billion goal for a first campaign. The $50 million pledge brings the campaign total to $823 million, and the University is on track to meet its overall goal well before the scheduled completion date of 2017.

Questrom says both he and his wife, Kelli, take great pride and pleasure in being able to pay forward the blessings of a combination of good luck and hard work that have enriched their lives, beginning with Allen Questrom’s education at Boston University. “When one looks at where investment can do the most good,” he says, “you have to think of innovation in our schools, because second only to the positive influence of family values, the route to earned success is to be well educated.” He notes that his own retail career began with a BU retailing course taught by one of his professors, the late Allen Beckwith (Hon.79).

“I wouldn’t call him a fashion maven,” Questrom says with a smile, but “he was a very, very passionate” teacher, who believed in his students and wanted to help them succeed.” Beckwith praised Questrom’s work, and encouraged him to find the right career, but the young graduate had another idea: he wanted to become a ski instructor. The winter after his graduation was short on snowfall, Questrom recalls, and he took a call from his very determined and pragmatic former teacher. “Beckwith says, ‘Look, how can you be a ski instructor? There’s no snow. I’ve arranged for a couple of retail interviews for you in Boston and New York.’”

He agreed to an interview in Brooklyn, N.Y., with the venerable Abraham & Straus, a division of Federated Department Stores, which was known for its outstanding training program. When he was offered a slot on an executive training squad (he liked the athletic sound of that) starting the following Monday, he signed on and returned to Boston to pack and move to Brooklyn.

“That weekend, we had the biggest snowstorm of the year—two feet of snow,” he says. “But I’d already committed to them and wouldn’t break my word.” Swearing all the way, he drove to Brooklyn in his VW and got a room at the Y. He quickly discovered that Beckwith’s retail classes had taught him well, giving him an edge over all the other trainees. He also discovered a love of, and natural talent for, the “schmatta” business. (Beckwith’s classes even taught the retail jargon.)

“I would hope that students, as they go through school and into a career, will periodically reflect on their life, to pay mental homage to the people who helped them along the way,” Questrom says, “and to recognize that as they ‘make good,’ they have a responsibility to ‘do good,’ to pay it forward by helping the next generation. And I believe that our colleges and universities are a real pivotal point on each generation: how well we educate our students determines how well each generation will deal with the issues of its time.”

Swapping “business” for “management” in the new school’s name, the dean says, reflects the former word’s greater scope, “representing the vast and vibrant range of industries, encompassing everything from for-profit to nonprofit enterprises around the world, for which we aim to prepare our students.” The school, which offers courses through the executive and doctoral levels, already places particular emphasis on sectors such as digital technology, social enterprise and sustainability, and health and life sciences.

Questrom spent most of his career in retailing with Federated Department Stores, Inc., rising from management trainee in 1964 to corporate executive vice president in 1987. After Federated succumbed to a hostile takeover by a Canadian real estate mogul in 1988, he left Federated to steer the turnaround of Neiman Marcus. He returned to Federated in 1990 and brought the company out of bankruptcy in 1993. In 1995, he engineered the acquisition of rivals Broadway Department Stores and R. H. Macy Company, Inc. He retired in 1997 from Federated Stores, soon to become the new Macy’s, Inc., but a short time later returned to retailing as chairman, president, and chief executive officer of Barneys New York, Inc., bringing the fashion emporium out of bankruptcy in 1999, and creating the new COOP division. From 2000 to 2005, Questrom, as the JCPenney Company, Inc.’s first “outsider” chairman and CEO in its nearly 100-year history, directed the successful turnaround of its department store, catalog, and internet businesses.

Questrom has served since 2006 as a senior advisor of Lee Equity Partners. He is a director of the Glazer Family of Companies and is on the board of Men’s Wearhouse, Inc., and the At Home retail chain and the board of advisors of The Robin Report, which provides insight into consumer product industries. He is a former director of Foot Locker, Inc., Sotheby’s Holdings, Inc., and Walmart. Questrom is a trustee of BU, his alma mater, where in 2012 the Allen and Kelli Questrom Foundation endowed two School of Management professorships, in addition to the earlier gift creating the endowed deanship and professorship. He a former trustee of the Aspen Music Festival & School; the Questroms underwrite student scholarships there. Allen and Kelli Questrom, as proponents of the principles of liberty, individual opportunity, and free enterprise, are members of the National Council of the American Enterprise Institute for Public Policy Research, one of the nation’s most highly respected problem-solving think tanks.

Retiring from her fashion promotion career in 1986 to become active in civic life following what she describes as a “blessedly early” diagnosis of breast cancer, Kelli Questrom became an advocate for preventive medicine, speaking by invitation on Capitol Hill. In the mid-1980s, she cofounded the Greater Los Angeles Partnership for the Homeless, which resulted in the establishment of L.A.’s Downtown Women’s Center, and served in the 1990s on the first national board of directors of Design Industries Foundation Fighting Aids. For 7 years she has served as a trustee of the Aspen Art Museum, and for 12 years as a Dallas Museum of Art trustee. The Allen and Kelli Questrom Foundation has endowed these two museums’ educational programming, as well as the free docented tours program for public and charter school students at the Whitney Museum of American Art in New York City. Questrom was a trustee of the Whitney in the 1990s, and the Questroms are currently members of its National Committee. Kelli Questrom is also a member of the board of trustees of the Aspen Santa Fe Ballet, a nationally recognized dance company that performs, produces, and teaches classical ballet and folkloric and African dance forms.

In the video above, watch the naming ceremony for the Questrom School of Business. Video by BU Productions

More on the Questrom Gift