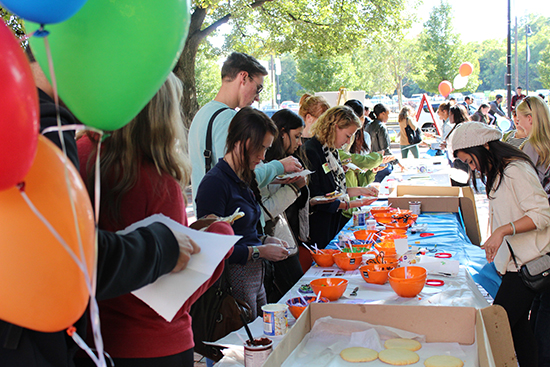 Stop by the many tables at today’s Arts Fair on the GSU Plaza between 11 a.m. and 2 p.m. to learn more about performing and visual arts organizations on campus and in the Boston area. Photo courtesy of BU Arts Initiative

The performing and visual arts play a vital role in campus life at BU. For confirmation, one has only to look at the Student Activities website, which features more than 20 dance groups alone. Factor in the dozen-plus arts-related venues on campus, from the 808 Gallery to the Stone Gallery, BU Central, and the Tsai Performance Center, and you begin to get a sense of how much of student life revolves around the arts.

Want to learn more about the dozens of organizations on campus devoted to the arts, as well as those in and around Boston? Make sure to visit the 2015 BU Arts Fair today on the GSU Plaza from 11 a.m. to 2 p.m. Representatives from organizations like BU Jazz Ensembles, Boston Playwrights’ Theatre, and the College of Fine Arts Schools of Music, Theatre, and Visual Arts will be on hand with information about getting involved.

This year’s inaugural fair, sponsored by the BU Arts Initiative, replaces the BU Arts Crawl, which was held at multiple venues along Commonwealth Avenue. With everything in one central location, today’s event offers one-stop shopping. “While we loved the idea of a ‘crawl’ and it worked for some BU programs, it didn’t work well for others,” says Ty Furman, managing director of the BU Arts Initiative. “Our goal is to expose as many students as possible to all of the exciting opportunities to engage with the arts at BU and in Boston.” Last year, more than 700 students visited the Arts Initiative table at the GSU Plaza, Furman says, so the decision to move all activities there this year was a no-brainer.

The carnival-style event kicks off with rallying tunes from BU’s Pep Band, followed by a series of 10-minute performances throughout the day, including by the School of Music’s Baroque Ensemble and BU Jazz Ensembles and the a cappella groups the BosTones and the BU Allegrettos performing a few popular songs.

Theater buffs will be able to catch performances by two very different student groups: BU Off Broadway and the BU Shakespeare Society. Both will stage short performances on the Plaza.

Looking for a laugh? Members of BU’s only long- and short-form improv comedy group, Liquid Fun, will also bring their considerable talents to the fair. Then stick around to hear readings from original fiction and poetry, courtesy of students and faculty from the Creative Writing Program.

Among the dance organizations performing are members of the Physical Education, Recreation & Dance dance program as well as BU’s Irish step dancing team, Step About Boston. Following their performance, Sally Sommers Smith, a College of General Studies associate professor and acting chair of natural sciences and mathematics, will perform a set of Irish songs. Although known principally for her biology classes, Smith has a strong passion for traditional Irish music and studied ethnomusicology at the University of Limerick. She will be joined by her husband, Paul F. Wells, a Metropolitan College lecturer.

The point of the live performances is not only to provide entertainment, but also to expose students to the breadth of arts and cultural opportunities available on campus. “We are really excited that we have so many forms of art represented—from visual and music to theater and comedy,” says Furman. “There is something here for everyone.”

There will be free swag aplenty as well. Many of the attending organizations are offering exciting giveaways, raffles (you can enter to win a pair of tickets to a Handel and Haydn Society concert), and information on discounts available to college students.

Among the notable Boston-based organizations on hand will be the Boston Ballet, the first repertory ballet company in New England; the Isabella Stewart Gardner Museum, whose collection of fine and decorative arts is housed in the nearby Fenway in a spectacular building modeled after a 15th-century Venetian palace; Improv Boston, a nonprofit improvisational comedy theater that also offers training programs; and representatives from Boston Calling, a twice yearly three-day music festival, which returns to City Hall Plaza starting September 25.

Stop by the BU Arts Initiative table to receive a Boston Symphony Orchestra College Card, good for over 20 free concerts at Symphony Hall throughout the academic year. Find additional information at the table about other admission discounts. Students can also enroll in the BU Arts Initiative’s Arts Insiders program, which offers free tickets to numerous Boston art events. New this year: BU students and faculty will receive free admission to the Institute of Contemporary Art by showing their BU ID (staff members must visit the Arts Initiative office to pick up a pass to receive free admission).

If you’re interested in learning about the dozens of arts courses offered at BU, or about upcoming campus exhibitions and visiting artists, representatives from the CFA schools will answer questions and provide information.

“Our goal is to ensure that students know about, and take advantage of, all of the great arts events available to them,” says Furman. “Virtually everything that happens on campus is free, and there are great opportunities to see and do things in the Boston area. We also want students to think of Boston as a part of campus and to enjoy and learn from what is going on around us.”