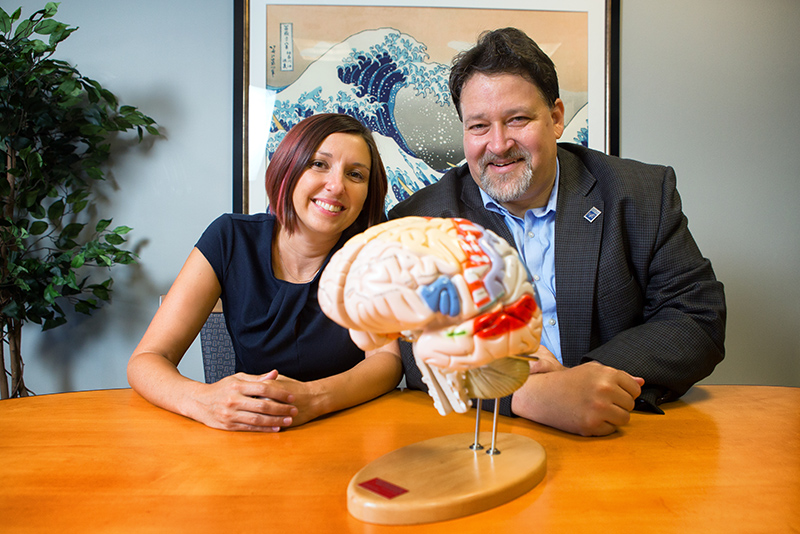 Samantha Michalka and David Somers identified a previously unknown attention network in the brain. Their work appears in the journal Neuron. Photo by Mike Spencer

Humans abound with remarkable skills: we write novels, build bridges, compose symphonies, and even navigate Boston traffic. But despite our mental prowess, we share a surprising deficit: our working memory can track only four items at one time.

“Would you buy a computer with a RAM capacity of 4?” asks David Somers, professor and chair of the Department of Psychological & Brain Sciences. “Not 4 MB or GB or 4K—just 4. So how the heck do humans do all this stuff?”

“There’s so much information out there, and our brains are very limited in what we’re able to process,” adds Samantha Michalka, a postdoctoral fellow at the Center for Computational Neuroscience & Neural Technology. “We desperately need attention to function in the world.”

Michalka is lead author and Somers is senior author of a new study that sheds light on this enduring mystery of neuroscience: how humans achieve so much with such limited attention. Funded by the National Science Foundation (NSF) and the National Institutes of Health (NIH), the work identifies a previously unknown attention network in the brain. It also reveals that our working memory for space and time can recruit our extraordinary visual and auditory processing networks when needed. The research appeared on August 19, 2015, in the journal Neuron.

The scientists wondered just how closely the networks cooperate, and when. “Our visual system is terrific at processing space, but just okay at processing time,” says Somers. “But our auditory system is amazing for processing time, but not very good for space.” In other words, when a person tries to locate something in space, like a speeding ambulance, vision trumps hearing. But try to keep track of intervals in time, and hearing wins.

But what happens when you have to use the inferior system? For instance, what if you had to remember the location of several noises, with no visible cues? Would your overtaxed auditory system “borrow” spatial expertise from the more competent vision regions? That’s what the scientists wanted to find out. This led to another set of experiments, where they asked subjects to complete spatial tasks with their hearing, and timing tasks with their vision. The experiments showed that the two networks cooperate closely, with the visual network helping us understand what’s happening in space, and the auditory network helping us understand events occurring over time.

The team’s work adds to the overall understanding of how the human brain is organized. Fine-tuning our map of the brain may eventually lead to a deeper understanding of attention disorders and better tools for predicting the outcome of brain injuries.

Michalka says scientists are especially interested in how the frontal cortex—the hub of attention and planning—adapts to support cognition. “Because we think a lot of higher-level cognitive processes are going on there, it’s much more complicated to study, and so we need to get more and more clever in the way that we approach it,” says Michalka. “The frontal cortex is one of the final frontiers.”