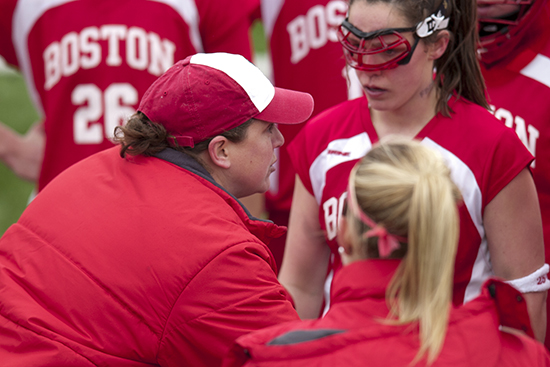 There’s an old saying in sports: if you want to be the best you have to beat the best. But for the BU women’s lacrosse team, simply playing the best may be good enough.

The Terriers opened the season with an especially difficult nonconference schedule, facing 4 of the top 15 ranked teams in Division I women’s lacrosse. They fell to currently ranked number one North Carolina, number 2 Maryland, number 10 UMass, and number 13 Johns Hopkins before returning home last month to open play in a new conference—the Patriot League.

Despite those punishing losses, says head coach Liz Robertshaw, the experience has been invaluable. After she received calls from the coaches of Maryland and the University of North Carolina—two teams that went head-to-head in the NCAA final last season (UNC won)—offering to host BU’s lacrosse team at the beginning of the season, Robertshaw says, she “ran it by the captains and asked if they wanted to take on this challenge. To their credit, they said they could handle it. Anytime you get an opportunity to play teams of that caliber you should take it, because it will show you what you need to work on.”

Her players were enthusiastic. “It was an amazing opportunity for us, and personally I wouldn’t want to start a season any other way,” says Rebecca Church (COM’14), the team’s leading scorer. “It pushed us to really focus, because those teams highlighted our flaws, and we were able to build from that. We try not to focus on the scoreboard, because even though we lost by around 10 goals, we knew we were getting better.”

Playing against the nation’s elite teams early in the season has strengthened the Terriers in conference play. They’ve won four of their first six Patriot League contests, moving into third place with a 4-2 conference record. In the past week, the Terriers have dropped close contests with Lehigh and Colgate, defeats the Terriers hope to rebound from when they host the first-place Loyola Greyhounds tomorrow, Saturday, April 12.

A new conference has meant new rivals for the Terriers and a chance to compete for an NCAA bid, something they had to forgo last season because the move to the Patriot League made them ineligible—a fact, players say, that has only reinforced their determination to win this season.

“Last year was tough because we couldn’t play for the America East title,” Church says, “and I think we came into this season hungrier as a result and looking to make a statement.”

The Terriers did just that when they defeated defending Patriot League champion Navy on the midshipmen’s home turf last month. Church led the way with two goals and one assist as BU took the game 9-8, snapping Navy’s 15-game conference winning streak.

“We got rattled during our first couple of games this season,” Robertshaw acknowledges, “and Navy is a very aggressive team that put a lot of pressure on us to clear the ball. I think playing that tough nonconference schedule really helped the team’s confidence and played a huge role in that victory.”

During a recent practice, the coach exhorted her players to take their time on offense and continue to show that newfound confidence. “Don’t just take a shot because you have one,” she yelled as a brisk spring wind whipped across Nickerson Field. “Let’s get the shot we want.”

Regardless of the outcome against Loyola tomorrow, the Terriers have already clinched a spot in the Patriot League tournament, which begins Tuesday, April 22.