“By looking at the natural system—how rapidly it changes and under what conditions—we can get a sense of what the likely scale of future changes will be.”

In the video above, see how the JOIDES Resolution drills into the ocean floor to retrieve sediment cores for scientists to study. Video courtesy of the International Ocean Discovery Program. Photos by William Crawford, IODP/TAMU (top) and Bill Mills, IODP/TAMU (video)

For farmers, fishermen, villagers, and city dwellers across East Asia—from the Philippines to Korea—the monsoon season brings both relief and apprehension. From May through October, the vast weather system known as the East Asian Monsoon funnels moist air from over the Pacific and Indian oceans and dumps it on land. The rain nourishes rice and other crops that feed the region’s more than one billion people.

But when the monsoon deviates from type, it can bring typhoon-fueled flooding that pummels crops, or no rain at all, leaving drought-withered crops, hungry mouths, and economic losses. Such changes in the monsoon’s behavior and severity can have far-reaching consequences: over one-fifth of the world’s population falls under its influence.

To better understand the system and its potential for change, an international team of scientists is peering into its history, drilling deep beneath the ocean floor to unlock five million years’ worth of sediment—a time capsule of monsoons past.

Most ocean-drilling ships are commercial vessels that suction vast amounts of oil and gas out of the oceanic crust. In fact, every drillship from the United States is used for that purpose, except one: the JOIDES Resolution, which is funded by the National Science Foundation (NSF) and operated for scientific ocean drilling by the International Ocean Discovery Program (IODP).

Each year, the IODP sends the Resolution to a different part of the world to drill into the crust and extract core samples displaying layers of sediment going back millions of years. The scientists chosen for these expeditions are among the world’s elite in their fields. Each project varies in focus; the research team might be looking at climate, volcanism, earthquake activity, marine life, or other critical features of the Earth’s geologic history.

In fall 2013, the Resolution’s mission was to explore the Sea of Japan for evidence of changes in the behavior of the monsoon system. (Some countries have called for the sea’s International Hydrographic Organization–approved name to be changed to East Sea.) The eight-week expedition was led by Richard Murray, a College of Arts & Sciences professor of earth and environment, and Ryuji Tada, a paleoclimatologist and oceanographer from the University of Tokyo, Japan. The diverse international crew, which included scientists from almost every continent, wanted to more accurately assess how sensitive the monsoon system is to climate shifts. 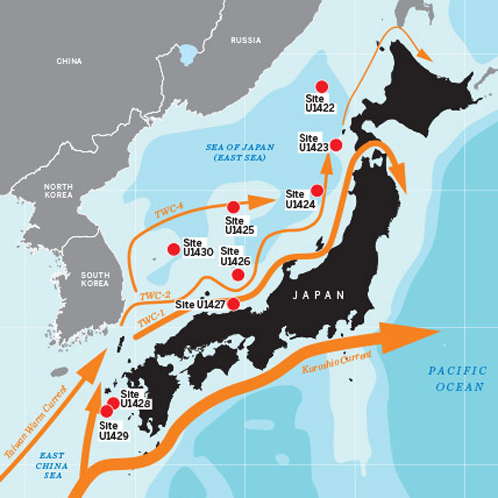 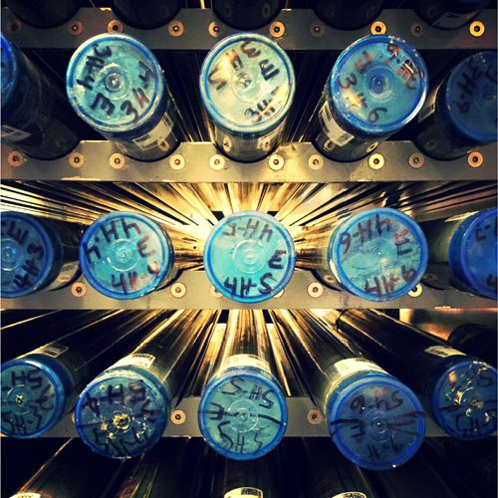 Cores pulled from the oceanic crust at nine primary drilling sites beneath the Sea of Japan display layers of sediment that stretch back millions of years. Photo by Justin Skootsky, IODP/TAMU

Murray, recently named director of the NSF’s Division of Ocean Sciences, says it is likely that the monsoon system will be affected by climate change over the next 100 years. “Some areas will get drier and some wetter,” he says. “By looking at the natural system—how rapidly it changes and under what conditions—we can get a sense of what the likely scale of future changes will be.”

Alterations in the monsoon system could have a huge impact on regional water supplies, crop cycles, and the severity of typhoons. If the Asian landmass warms more quickly in the summer, even more moist air will be syphoned from over the relatively cooler oceans (because land warms faster than ocean—a key driver of the monsoon cycle).

“This would bring dramatic increases in rainfall that could result in more floods over large and densely populated regions in East Asia,” says Mariem Saavedra Pellitero, an expedition scientist and researcher at the University of Bremen, Germany. “On the contrary, other Asian regions would be affected by severe droughts and desertification, leading to famine in this hypothetical scenario. A warming climate also leads to a warmer ocean and thus to an increase in evaporation and precipitation; this fosters the inception of more extreme hurricanes and cyclones.”

Life on board the 471-foot-long Resolution is intense, with crew and scientists stationed in tight quarters, alternating 12-hour shifts. Expeditions are typically about two months long, with no days off. Scientists and technicians are only about one-third of the ship’s population; the rest are drillers, ship’s crew, and the stewards who run the galley and take care of the lodgings. Sites are chosen for drilling only after an arduous and competitive proposal process that takes about five years of scientific, engineering, and safety reviews.

To extract the core samples, the drill team lowers continuous stands of pipe to the seafloor; a drill at the end of the piping then burrows hundreds of yards down into the Earth’s crust. Because the pipe requires the ship to be fixed in one location for days or weeks at a time, the Resolution is kept in place by computer-controlled thrusters tied to a GPS and sonar navigation system.

Murray, Tada, and their team examine the core samples for a range of indicators. To discover what actually lies in the layers of sediment, Murray must separate out the chemical and isotopic signatures of dust, volcanic ash, river runoff, microbes, and plankton remains. He does this back on dry land in the BU Analytical Geochemistry Laboratories, using high-tech instrumentation capable of measuring concentrations of certain chemical elements at the parts-per-trillion level. He also examines pore water squeezed out of the sediment, measuring the concentrations of metals, alkalinity, nutrient composition, and other components.

More dead plankton preserved in the sediment during a particular period may indicate increased rain in the continent’s interior—higher rainfall causes additional nutrients to flow down the Yangtze River and into the sea, feeding the plankton, which fall to the seafloor when they die. Larger grains of dust blown off the continent and into the sea suggest stronger winds during the period when that sediment layer was deposited. More dust coupled with less river runoff indicates a drier climate, while less dust and more runoff means a wetter climate.

The researchers can even tell where the jet stream was during each period; if it was primarily over southern China, it would have picked up and deposited dust that looks chemically different from, and contains different minerals than, the dust in northern China. And where the jet stream is located dictates how warm or cold the climate is. A more southerly jet stream creates a colder climate because it allows colder northern air to migrate farther south.

The work Murray and his fellow scientists are doing is also preserving a highly valuable geologic and climate record for future science. The oceanic core samples from past expeditions sit in cold storage (four degrees centigrade) in Germany, Japan, and the United States. Even core samples from 20 or 30 years ago still provide plenty of material for current research.

From Dinosaurs to Space

It will take roughly five years to complete the first round of data analysis for the Sea of Japan mission. Once they have analyzed the past climate data, Murray and the other scientists from the expedition can correlate their findings with other climate records, such as that of the Earth’s atmospheric composition taken from the ice sheets of Greenland and Antarctica. The concentration of carbon dioxide trapped at different depths in these ice sheets has given climate scientists a detailed understanding of changes in carbon dioxide levels—and thus warmer and cooler periods—over tens of thousands of years.

By comparing their data with these other datasets, researchers can understand how the monsoon system fluctuates given changes in atmospheric carbon dioxide and global temperature. Ice records date back tens of thousands to hundreds of thousands of years, but the oceanic sediments date back millions of years, giving Murray and his team an opportunity to extrapolate climate shifts much farther back in time.

The result will be a far more nuanced understanding of how a complex weather system responds to variations in global temperature. This insight should prove valuable to policymakers in East Asia as they prepare to face the effects of global warming and shifting weather patterns on cities, farming and fishing communities, flood zones, and coastal communities impacted by the severity of typhoons. 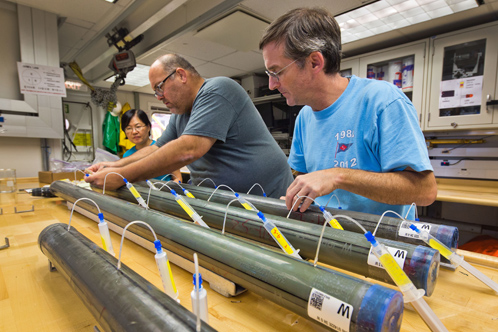 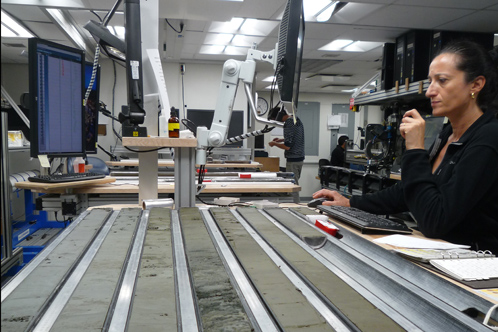 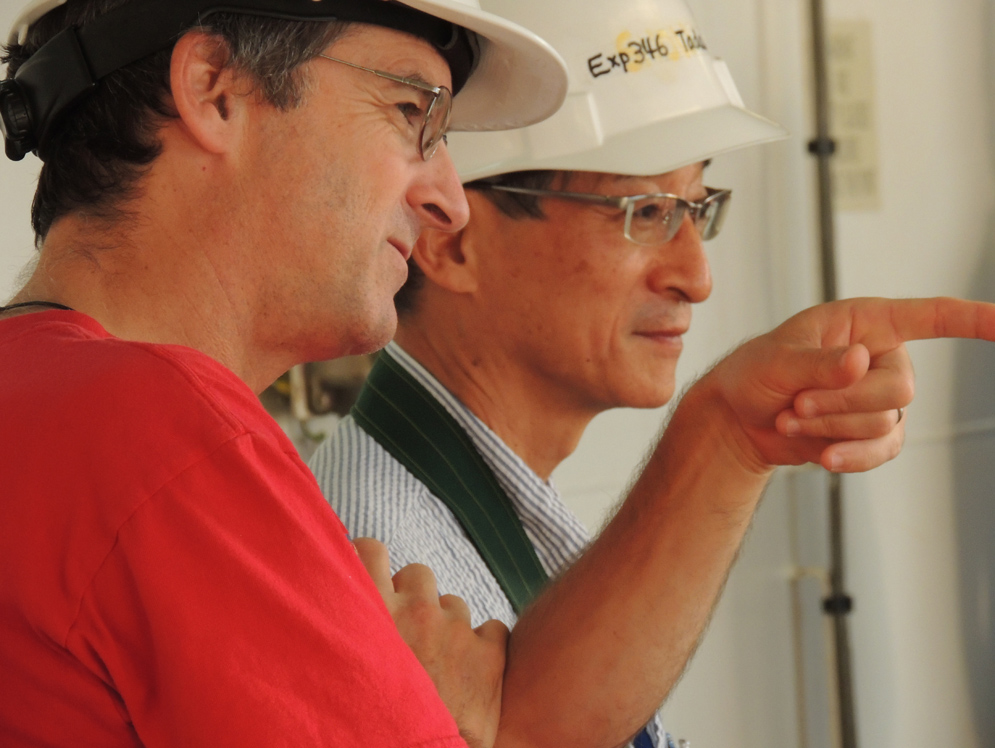 Sediment from the core samples collected by Murray (bottom photo, left), Tada (bottom photo, right) and their team aboard the JOIDES Resolution will be analyzed on dry land for roughly five years by scientists from across the world. Photos by Joanna Iofi, IODP (bottom), William Crawford, IODP/TAMU (top left) and Aiko Sugisaki, IODP (top right)

During his 25 years with the program—he is a veteran of six IODP expeditions as well as other scientific drilling voyages—Murray has contributed to several crucial discoveries, from the extinction of the dinosaurs to the viability of life below the seafloor. On a 2010 Resolution voyage to the South Pacific Gyre, a rotating current that stretches from the equator to Antarctica and Australia to South America, he studied an area of the ocean with so little life that it is considered a biological desert. There, microbes on the seafloor (and up to about 100 yards below the seafloor) subsist on the bare minimum of energy provided by the extremely small amount of dead organic material that falls to the bottom of the ocean.

“We found they were subsisting on far less energy than anybody ever thought,” says Murray, who is still poring over the samples from the project with Ann Dunlea (GRS’17), an earth and environment PhD student who joined him on the mission. NASA has helped fund his research into life beneath the seafloor because of its implications for studying conditions on other planets and moons that might support life.

According to Dunlea, it isn’t just the potential impact of the research that makes the IODP voyages so rewarding.

“On the ship, there are so many scientists living in such close quarters that interesting science conversations pop up at any given moment, including while eating breakfast or working out in the ship’s gym,” says Dunlea, who was also on the fall 2013 voyage. “The ship was a perfect environment to learn a lot and make strong connections.”

A version of this story was published in the fall 2014 edition of arts&sciences.

Jeremy Schwab can be reached at jschwab@bu.edu.

The Future, Buried in the Deep