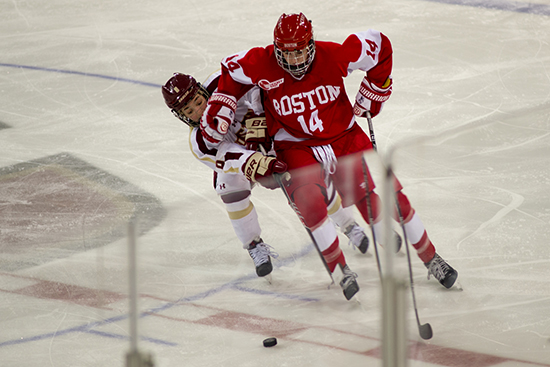 The Terrier icewomen will have to wait at least one more year to clinch their first Beanpot title as a varsity program. BU was unable to climb out of an early 3-0 deficit and ended up losing 4-1 in the first round of the tournament for the second consecutive year.

BC entered the Beanpot on a 10-game unbeaten streak and is currently ranked seventh in national polls. BU, on the other hand, had dropped five of its last eight contests.

The Terriers were on the defensive throughout the first period, and veteran goalkeeper Kerrin Sperry (CAS’13, GRS’16) could do only so much. She managed to stone BC sophomore Haley Skarupa on a breakaway after the Terriers turned it over in their own zone, but they were not quite as fortunate a few minutes later.

Dakota Woodworth (CGS’14) sparked BU’s attack during a power play, but Eagles forward Dana Trivigno intercepted her pass and skated uncontested towards Sperry. Sperry was able to stop the initial shot, but BC senior Taylor Wasylk came flying in to clean up the rebound and put the Eagles ahead just six and a half minutes into the game.

Just a few minutes later, Maddie Elia (CGS’15) was called for holding as BU tried to contain the Eagles, and BC’s Emily Field quickly capitalized with a nice toe drag move and finish early in the ensuing power play.

The Terriers’ troubled start continued as Woodworth was penalized for cross-checking as she tried to stop a third goal with two minutes remaining in the first period. Again, the Eagles bombarded Sperry with shots at point-blank range. While she was able to stop Wasylk’s initial shot, Skarupa was there to slap the rebound into the Terrier net and put the Eagles up 3-0 before the first intermission.

But the Terriers refused to hang their heads after falling behind early. Sarah Lefort (CGS’15) has been BU’s main weapon all year (second in the nation, with 0.78 goals per game) and she  brought her squad back to life with an electric goal on a three-on-two break halfway through the period.

Suddenly the Terriers were the aggressors, and they started to take control of the game. For a moment, it looked as though they had trimmed the deficit to just one goal when the puck emerged from a scrum in front of the net and slowly trickled into BC’s net, but the officials disallowed the goal after reviewing the play and determining that the goalie was interfered with.

That missed opportunity gave BC, with a two-goal lead, the opportunity to play a conservative third period. The Eagles limited BU to seven shots throughout the first 18 minutes of the final frame, and when the Terriers pulled their goalie to add an extra attacker, Skarupa quickly scored to put BC up 4-1 and seal the game.

While this is a disappointing loss for BU’s seniors, who were hungry for their first Beanpot championship, their season is far from over. The team is second in the Hockey East standings and will face the first place Eagles twice more prior to the conference tournament. The BU players are already looking ahead to the postseason as they go for their third consecutive Hockey East championship.

The BU women’s hockey team will play the Harvard Crimson on Tuesday, February 11, in the Beanpot consolation game at Boston College’s Conte Forum at 5 p.m. The championship game will be between Boston College and Northeastern.

The BU men’s hockey team takes on the Harvard Crimson on Monday, February 10, in the Beanpot consolation game at TD Garden at 4:30 p.m. The championship game pits defending champ Boston College against Northeastern. The game will be televised on NESN.