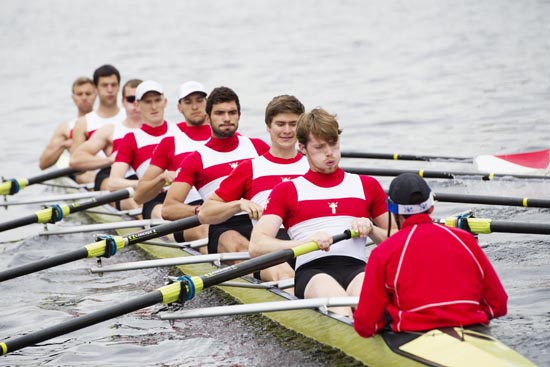 Athletes in the second varsity eight boat work on their precision and technique heading into the IRA Championships. Photos by Jackie Ricciardi

During Tom Bohrer’s first year as head coach of the BU men’s rowing team, the Terriers achieved a goal that had previously eluded them: they placed two varsity boats in the grand finals of the 2009 Intercollegiate Rowing Association (IRA) Championships. Thanks to National Rowing Hall of Fame inductee Bohrer’s expert tutelage, the Terriers earned that year’s Clayton Chapman Award for most improved team in the country—and have returned to the IRA Championships each season since.

Now, as the Terriers prepare to compete in the 112th IRA Championships, beginning tomorrow, Friday, May 30, in Mercer County, N.J., their sights are set on one goal: medaling in the grand finals.

The BU men began the spring season by winning four consecutive cups, besting crews from Wisconsin, Columbia, Syracuse, and Dartmouth. They carried that momentum into the annual regional championship Eastern Sprints May 18, where they advanced all five boats to the grand finals and captured three medals—including a gold, the first won by BU at the Eastern Sprints in program history. BU’s varsity eight boat is currently ranked seventh in national collegiate polls.

Since rowing is a tradition that predates most Division I sports, the IRA Championships remains an invitational event, with 24 schools selected to compete every year. This year, member schools Columbia, Cornell, Pennsylvania, Navy, and Syracuse selected 19 additional programs (including BU’s) to compete at the regatta.

“It’s the race of the year,” Bohrer says. “It’s our championship. The tradition is over 100 years old, and features some of the best college rowing in the country. We’re honored to be invited, and feel we have a good chance of putting all our boats in the grand finals.”

With the school year over, the Terriers have been able to devote the final week of their season exclusively to training. “This is what we focus on the entire year,” says cocaptain Kyle Peabody (CAS’14). “Now that we’re able to commit to rowing full-time, it certainly increases our conditioning, and that showed in our performance at Eastern Sprints. All five of our boats didn’t just make the grand finals—they were in the race right down to the finish line. We’re settled into our lineups, and I feel we’re really solidifying our rhythm heading into the IRA Championships.”

During a recent practice, Bohrer honed in on specific skills by having the athletes repeat the process of getting the boat started with an initial stroke and then work on their form by rowing one-handed at times.

“At this point in the season, most of the technical aspects of our training are complete,” Bohrer says. “We’re really trying to improve our sharpness. It’s not all about speed; precision can be even more important. That’s what rowing is all about: everyone getting their blades down at the same time, pushing off together, and stroking in unison.”

“You want all your boats to do well, and all the races are important, but the varsity eight is the big one,” he says. “Most of those guys are seniors, and they’re part of the second full class that’s come through since I’ve been here. I can safely characterize most of them as selfless. They could’ve hung their head when things didn’t go their way a few years ago, but they didn’t. They work hard, have fun, have good values, and instill those qualities in everyone else. Going into the biggest race of the year, there’s no one I trust more than them.”

The Boston University men’s rowing team will race four boats in the 112th annual IRA Championships, beginning with the first round heats tomorrow, Friday, May 30, starting at 8 a.m. The top two finishers in each heat will advance to the semifinals on Saturday, and the top three finishers in those races will compete in the grand finals on Sunday. All races will be held at Mercer Lake in Windsor Park, N.J. Find a full list of heats and schedules at IRA Championship Central.

Men’s Rowing Competes in Biggest Race of the Year