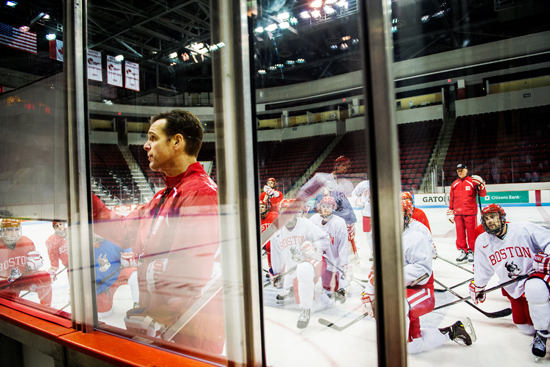 The Boston University men’s ice hockey team is ranked number one in the nation in the USA Today/USA Hockey and USCHO.com rankings, both released yesterday. The last time the Terriers topped both polls was in November 2010.

This past weekend, the icemen swept their two league games, defeating the University of Maine (3-2 in overtime) and the University of Connecticut (5-2) and earning an 8-1-1 overall record and 6-1-1 record in the conference.

Also, Hockey East announced yesterday the election of Jack Eichel (CGS’16) as its Warrior Hockey Player of the Week, as well as the Pro Ambitions Rookie of the Week, the second time he has been awarded the honor.

The Terriers’ illustrious history, with 5 NCAA championships, 7 Hockey East championships, and a record 29 Beanpot titles, appeared to take a detour last year, when the team ended the season 10-21-4, and also lost in round one of both the men’s Beanpot tournament and the Hockey East tournament. Now the magic is back. This year’s freshman class—the first recruited by head coach David Quinn (CAS’89) since he took over in 2013—has been voted the best recruit group in college hockey by College Hockey News.