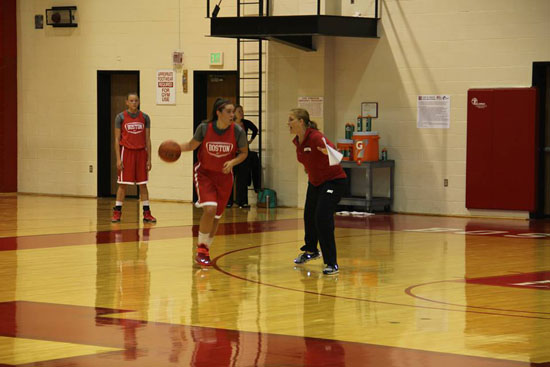 The women’s basketball home opener against  Harvard tonight marks a new chapter in the program’s history.

The Terriers are coming off a turbulent season that saw the resignation of head coach Kelly Greenberg amid allegations that she had mistreated players and that her coaching style had driven at least four of them to quit the team. Despite that, the team finished the season 13-20 overall and 7-11 in the Patriot League. Now, with a new coaching staff and four newcomers to the squad, the Terriers are looking forward to their second season in the Patriot League.

Head coach Katy Steding has big ambitions for the Terriers. A member of the 1996 US Olympic gold medal­–winning basketball team, dubbed the “Women’s Dream Team,” Steding came to BU from the University of California, Berkeley, where she was an assistant women’s basketball coach. She knows that she faces challenges in the coming season, including a thin roster (there are just 10 players on the squad) and a young team. But she’s focused on the opportunities that the season holds.

“I want to see us compete,” Steding says. “I want us to be known as a team that just doesn’t quit, that just doesn’t give up. If we play our buns off and we execute the things that we’re supposed to do, it’s going to come down to who makes more shots.”

As an undergraduate at Stanford, Steding was a power forward, helping the women’s basketball team win a national championship in 1990. She has played professionally in the WNBA with the Seattle Storm and Sacramento Monarchs, and with the American Basketball League’s Portland Power. As an assistant coach at UC Berkeley she guided the team to two consecutive NCAA tournaments.

“It’s not that I’m trying to recreate Cal here, because we’re not the same team,” Steding says. “But I want to take some of those principles and the things that are important to me and blend them into this group and help them see the vision I have for the program here.” Part of that vision includes building a fast-paced offense that is strong on transition.

“We are all looking forward to being able to get out and run the floor,” says cocaptain and guard Courtney Latham (SMG’17). “We have some really athletic girls on the team, so this should give us opportunities to get more points in transition than we have in the past.”

“They have tremendous input because there’s so much legwork that needs to be done that a head coach can’t do on their own, so I rely heavily on my assistants to do a lot of that initial work on a project,” Steding says. “They’re laying the groundwork on that. I can then come in and tweak it so when we share it with the team, it’s ready to go.”

In addition to Latham, the Terriers will be led this season by cocaptain Mollie McKendrick (MET’15), one of only three upperclassmen on the team, along with Troi Melton (COM’15) and Clodagh Scannell (SAR’16). The student-athletes say they are energized by the coaching changes and are looking forward to working under a new staff.

“They’re helping us learn,” McKendrick says. “We’re playing a little bit of a different game, but we’re excited about that.”

Aside from the upperclassmen, the team will rely on underclassmen Sarah Hope (CAS’17), who led all Terrier freshmen in scoring last season, Meghan Green (CGS’15), and Latham.

“There are only 10 of us this year, so we need to work together and really commit to helping each other get better,” Latham says. “We need to push each other and compete every day in practice so that we are constantly improving and executing the coaches’ strategies for the team. If we do this consistently, we are confident that we will win games.”

“It’s been easy to come in and deal with these guys because they’re all warm, friendly, and so together,” Steding says. “They’re such a good unit that it hasn’t been hard for them to accept a new coach. It’s been a fairly easy, gentle transition.”

Steding’s squad, which lost to crosstown rival  Northeastern 75-74 on Friday, will head to Albuquerque over Thanksgiving to take part in the University of New Mexico Thanksgiving Tournament. The new coach sees it as a team-building opportunity.

“I think we have a great group and great cohesiveness,” Steding says. “I’m looking forward to getting to spend some extra time with them.”

The Boston University women’s basketball team kicks off its home schedule against Harvard tonight at 7 p.m. in Case Gymnasium, 285 Babcock St. Tickets are free for students with a sports pass, $5 for BU students without a sports pass, and $7 for the public.

A New Season and a New Era for Women’s Basketball