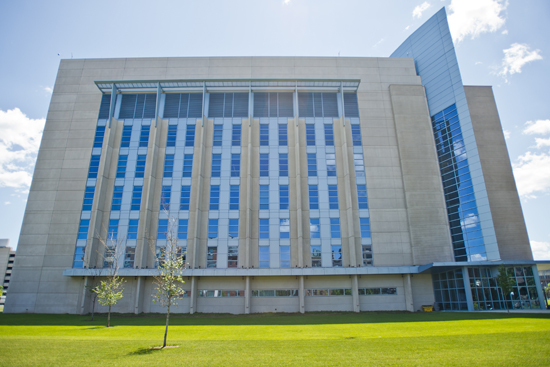 A federal court judge has ruled that research involving BSL-3 and BSL-4 pathogens can be done safely at BU’s National Emerging Infectious Diseases Laboratories, based on a National Institutes of Health Final Supplementary Risk Assessment. Photo by Cydney Scott

In an action that moves BU’s National Emerging Infectious Diseases Laboratories (NEIDL) closer to full operation, a federal court judge has ruled that a Final Supplementary Risk Assessment prepared by the National Institutes of Health (NIH) adequately analyzes the risks associated with research involving pathogens at Biosafety Level 3 (BSL-3) and Biosafety Level 4 (BSL-4) and that such research can be done safely at the BU Medical Campus site.

That risk assessment, which examined a series of scenarios and potential consequences of procedural failures, including containment system failures and malevolent acts, had been challenged in court by a number of Boston residents and the Conservation Law Foundation. The groups claimed that the risk assessment prepared by the NIH was not adequate and that the NIH decision to approve it was arbitrary and capricious.

In a 76-page opinion, US District Court Chief Judge Patti Saris found that “the NIH provides sufficient scientific support for its ultimate conclusions that the risks to the public are extremely low to not reasonably foreseeable, and the differences between the Boston location and the suburban and rural sites are not significant. In light of the benefits of placing the biolab in an urban area like Boston, which provides opportunity for expert medical research collaboration, and the low risk of harm to the public, NIH’s decision is rational.”

John R. Murphy, NEIDL director ad interim and a School of Medicine professor of medicine and microbiology, says he is pleased that the federal court “went through each and every objection of the plaintiffs in a methodical way and found that they were not warranted.”

“The court is saying that it’s reasonable for the NIH to determine that research using these types of pathogens can be done safely at the NEIDL,” says Murphy. “This is one more step to the opening of the lab.”

Murphy says that one additional judicial hurdle, a similar lawsuit filed in state court, will be heard later this year.

The University has also asked the Boston Public Health Commission for required permits to operate the facility as a BSL-3, and will soon submit documents required for permission to operate as a BSL-4 lab.

Once the lab is open, all research will be subject to at least three systems of supervisions and safeguards. Those include approvals from the Centers for Disease Control, the Institutional Biosafety Committee, and the Boston Public Health Commission.

Construction of the $200 million NEIDL facility was completed in September 2008, but controversy and litigation have kept much of the building’s 192,000 square feet of laboratory space closed. In March, BU researchers moved into the NEIDL, at 620 Albany St., to work on tuberculosis research that has been approved for Biosafety Level 2 (BSL-2) laboratories.