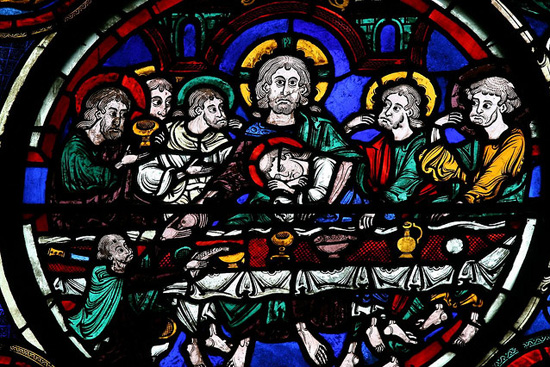 John’s Gospel account of the Last Supper, depicted here in a window at France’s Bourges Cathedral, is among the book’s unique takes on the life of Jesus. Photo courtesy of Flickr contributor Holly Hayes

Can something be both vile and valuable? Supernatural and historically accurate? Yes, says the Rev. Robert Hill, whose latest book probes all aspects of the most unusual of the Bible’s four gospels—that of John.

The Courageous Gospel (WIPF & Stock, 2013) combines lectures and sermons—mostly from Hill, dean of Marsh Chapel, but from others also—that dissect the last canonical gospel, likely written in the 90s or early 100s AD. John’s Gospel is utterly unlike the Synoptic Gospels of Matthew, Mark, and Luke. John is more mystical and more emphatic that Jesus was divine, was God, yet more accurate than the others, according to scholars, about Palestinian geography, Jewish feasts, the timeline of Jesus’ Passion, and other worldly matters.

His gospel also is laced with anti-Semitism, referring to Jesus’ enemies, clamoring for his execution, simply as “the Jews.” Hill notes that at the time it was written, John’s community of Jesus-following Jews was being expelled from their synagogues, as Judaism and Christianity finally sundered into separate religions. Hill, who is also a School of Theology professor of New Testament and pastoral theology, says it’s essential that “the tragic history of anti-Semitism in Christianity, and some of it is connected to the Gospel of John, is rooted up and understood, that John is understood, in its particular context.”

Although his book is written for theology students, Hill argues that average folks in the pews also profit from reading John: “Have you ever been disappointed? Have you ever experienced real dislocation? Have you ever known the pain of departure? Most people have. Here’s the glorious good news: these people discover in disappointment—not later, not ethereally, but right there—that they received a gift of freedom. These people right in the heart of dislocation, like students coming to college, found grace.”

BU Today spoke with Hill about his book and about John’s Gospel.

BU Today: Why do you call John’s the “courageous gospel”?

Hill: The community that developed the gospel faced squarely that the primitive Christian hope was wrong: the expectation that Jesus would return soon. He didn’t. John said, what we once believed is not so, but look!—in place of parousia, the second coming, we have the Paraclete, the Holy Spirit; in place of Armageddon, we have the adventure of every day. Every day is the last day. Also, courage to face dislocation. John’s community is a group of people moving out of Christian Judaism into Jewish Christianity. That dislocation from one religious tradition to another is very difficult, but they faced it with courage.

The third reason is, all the gospels face the departure of Jesus on the cross. But there’s something underneath it for John, not only the departure of Jesus, but the departure of the patriarch of the community (possibly the anonymous Beloved Disciple of the gospel, on whose testimony the writer bases his account), who finally, in old age, died. As hard as that was, this community found peace through that departure: “Peace I leave with you, my peace I give to you, not as the world gives.” 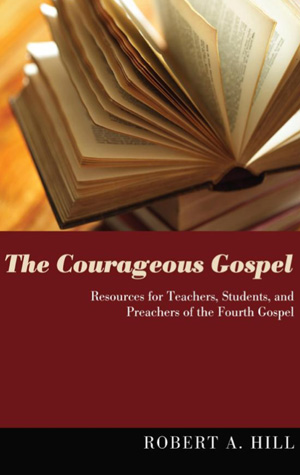 How do you reconcile, in words quoted in your book, the “soaring beauty of the Gospel and its harsh anti-Semitic character”?

This community that produced the fourth gospel was in a sibling rivalry—a harsh, family row—with people they had known and loved, and they got to using language that is really awful. That has to be faced and dispensed with. My interest in teaching the gospel is to do my bit against the long history of anti-Semitism and to try and move Christianity even further into embrace with our siblings in Judaism.

Some people might be put off by the mystical, theological aspect of this gospel, but on some historical points, it’s more grounded in reality than the others.

I have three responses: amen, amen, amen. This gospel, with the highest vision, also has feet closest to the ground. The big example, I would add, is: the story of the crucifixion in John is more accurate than those in the Synoptics, in terms of location, timing, and the main thing—the Gospel of John squarely puts the onus for the crucifixion on the Romans. It wasn’t just the Jewish Sanhedrin. The Romans historically held the power of capital punishment in their vassal states to themselves. The gospel shows that.

Also, the fourth gospel, almost alone, foresees that there’s a lot of truth that’s not in the Bible. [In John, Jesus says that] the Spirit will lead you into all truth. There are many things that I cannot tell you now, but I am leaving with you this counselor, the Holy Spirit, who will guide you. “You shall know the truth, and the truth shall set you free”—that’s out of the Gospel of John. And that opens the gateway to 2,000 years of, at its best, faithful educational investment by the church.

Beauty and Anti-Semitism: The Gospel of John

There are 11 comments on Beauty and Anti-Semitism: The Gospel of John

Beauty and Anti-Semitism: The Gospel of John
11
share this