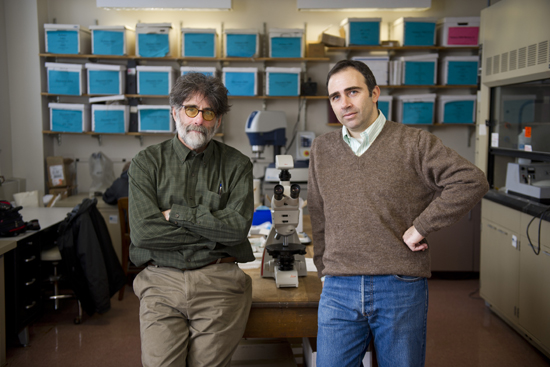 For many years it was believed that humans didn’t use fire until about 800,000 years ago. But two College of Arts & Sciences archaeologists have found evidence in South Africa of a man-made fire dating back 1 million years, the earliest such discovery. The finding by Francesco Berna and Paul Goldberg substantially pushes back the date that humans laid the first kindling. Berna and Goldberg’s research was published yesterday in the online edition of Proceedings of the National Academy of Sciences.

Knowing when man first made fire has huge implications for understanding how our species evolved. Once early man had flames at his command, he not only had a source of heat, but a means to cook food. By unlocking nutrients in food, cooking made for a much better diet that not only boosted overall health, but may have contributed to other modern human traits, such as increased brain size and pair bonding, as the prominent primatologist Richard Wrangham has argued. Berna and Goldberg’s discovery bolsters Wrangham’s theory that our evolutionary predecessor, Homo erectus, was building fires and cooking far sooner than was previously thought.

The evidence of fire was found in Wonderwerk Cave, a deep, tunnel-like cave on a high plateau in South Africa that has produced a wealth of archaeological artifacts. Goldberg, a CAS professor of archaeology and geoarchaeology, joined a team there led by Michael Chazan, a University of Toronto professor, in 2004. During that trip Goldberg took a sample of sediment from the cave floor that Berna, a CAS research assistant professor of archaeology, later found contained evidence of burned animal bones and wood ash. Goldberg and Chazan returned to the site last year, where they collected additional samples later found to contain more bone and ash.

The discovery is the latest to come out of Goldberg’s Laboratory of MicroStratigraphy, which is devoted to analyzing sediments and their arrangement in soils at archaeological sites and is the only lab of its kind in the country. In December, Goldberg and Berna were part of a team that published evidence of the earliest man-made bedding. They found fossilized remains of 77,000-year-old sedges and aromatic leaves at another site in South Africa. Prior to their find, the oldest bedding uncovered was at a site in Israel, believed to be approximately 23,000 years old.

While archaeology has traditionally been largely concerned with artifacts, such as stone tools and pottery, geoarchaeology focuses on the rocks, soils, and sediments in which those objects are found. It is essentially a forensic science that draws equally from geology and archaeology. Goldberg and Berna examine sediments for microscopic clues of human activity and past climatic conditions.

“We have to realize that the sediments in archaeological sites should be considered as artifacts,” Goldberg says. “At some sites they throw the sediments down the side of the hill, which is kind of crazy.”

Goldberg started BU’s MicroStratigraphy lab in 1995 with just one microscope. Today, he and Berna are involved in projects around the globe, including digs in France, Israel, Australia, and Texas. Goldberg recently traveled to France to begin analyzing the sediment attached to the foot of a Neanderthal skeleton at the Musée de l’Homme in Paris. He hopes the sediment will enable him to ascertain exactly what layers of the dig at the La Ferrassie site in the Dordogne region the skeleton came from. When the skeleton was unearthed at the turn of the 20th century, archaeologists were not yet in the habit of recording in detail where objects had been found.

To study sediments from archaeological sites, Goldberg and Berna collect clumps of earth and encase them with resin, which renders them stone-like. That hardened earth is then cut into ultra-thin slices that can be examined under a microscope. There they can see remnants of the past, such as wood ash crystals left by a fire.

Berna, the lead author on yesterday’s paper, hails from Italy and specializes in looking for microscopic evidence of man-made fire. That evidence is typically maddeningly hard to come by, since fires have a tendency to vanish. Remnants are often destroyed by wind or rain. In caves, seeping water can wash them away. Ironically, Goldberg was part of a team of researchers that debunked the evidence for what was then considered to be the earliest man-made fire, at the Zhoukoudian site in China, where Peking Man, the first example of what proved to be Homo erectus, was discovered. Their research found that the remains were from a naturally occurring fire.

At Wonderwerk, the location of the ash discovered was relatively deep in the cave, more than 30 yards from the entrance, out of reach of wildfires as well as rain and wind. The ash was also found at an earlier surface level of the cave, some five feet below the current surface.

“When the whole picture came together, that they had had controlled fire, I got goose bumps,” Berna says.

Now the two archaeologists are researching what they believe could be an even earlier fire in Wonderwerk, dating back 1.7 million years. Since new evidence of man-made fire typically sets off a controversy among archaeologists, Berna and Goldberg expect debate over their recent discovery, but neither is concerned.

“An extraordinary claim requires extraordinary evidence,” Goldberg says. “We have strong evidence of potential fire in the cave. I think most people will come down on our side.”

There are 6 comments on Playing with Fire