Thomas Kunz, a prolific and popular College of Arts & Sciences professor of biology, was hit by a car in Toronto while crossing a busy traffic circle, suffering serious brain damage. Kunz, director of the Center for Ecology and Conservation Biology and an internationally known expert on bats, was walking with students when he was hit at about 8 p.m. on October 26. No charges have been filed in connection with the accident. Kunz was taken to St. Michael’s Hospital in Toronto and was transferred October 29 to Brigham and Women’s Hospital in Boston, where he remains in intensive care.

Kunz’s daughter, Pamela Kunz, says her father is in critical condition, but that his condition has improved slightly over the past week. She says that swelling of his brain has decreased since he was operated on October 30 and color is returning to his cheeks, and that the family remains hopeful that his improvement will continue.

Kunz had traveled to Toronto to attend the Annual Symposium on Bat Research, sponsored by the North American Society for Bat Research, an organization whose members know the popular and colorful professor well. He is affectionately known as “Bat Man” to students and colleagues and is highly regarded for his study of white-nose syndrome, a little known and lethal disease affecting little brown bats, as well as for other work. Kunz has spent 45 years researching, observing, and caring deeply for bats, in Costa Rica, Ecuador, Trinidad, India, Malaysia, and throughout the United States.

Virginia Sapiro, dean of Arts & Sciences, says Kunz’s accident was a truly terrible event. “Tom is a greatly valued member of this community as a researcher, scholar, and educator,” Sapiro says.

Frederick Wasserman, a CAS associate professor of biology, has known Kunz for 33 years and describes him as “the kindest and warmest person you will ever meet.” 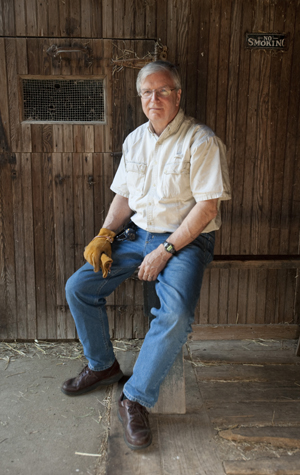 “Tom is a remarkable scientist and one the best editors around,” says Wasserman. “He has had incredible success because he deserves it. He works so hard, he’s always the last one to leave, and he has a high level of intelligence. He is always willing to do the right thing, always willing to help. I miss terribly not being able to go in his office and chat.”

“We are all devastated by the terrible accident,” says Kate Langwig (GRS’15), a PhD candidate who works at the center. “We are hoping for a speedy recovery, and we are comforted that he is surround by his family and thankful for the support of his friends and colleagues at BU and other institutions.”

Kunz is a founding member of the Tiputini Biodiversity Station’s scientific advisory board in eastern Ecuador, and the inventor of aeroecology, the study of the web of airborne influences and creatures, from bats and birds to microbes. Author, coauthor, editor, and coeditor of more than 240 publications, he is a former president and an honorary member of the American Society of Mammalogists and the 2008 winner of the lifetime achievement award from the aquifer-researching Karst Waters Institute. Last March, he was awarded a William Fairfield Warren Distinguished Professorship, BU’s highest faculty honor.

There are 8 comments on CAS Professor Seriously Injured by Car