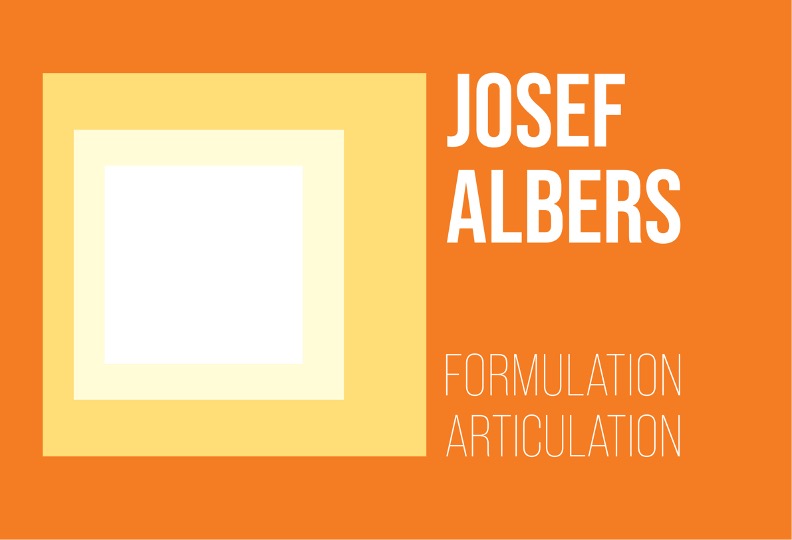 Josef Albers was the one artist who taught more courses in more different departments, over a longer time period, than any other master-teacher at the legendary Bauhaus art school. He had become a professional teacher in public schools before he enrolled at the Bauhaus in 1920, to do advanced work in the abstract stained glass medium.

Albers believed that one’s individuality comes to speak in its own accent only after the fundamental disciplines have been mastered and the artist has come to terms with himself and what he has to say. When Johannes Itten (1888-1967) was dismissed at the Bauhaus, Albers was asked to teach Preliminary Design and then Color in the Bauhaus’ Foundation Course. He based his teachings on his own experience and clarified his means by laboratory assignments to his students, in order to provide practical underpinning for the school’s curriculum. Ultimately he carried his researches and his teaching methods to the United States and influenced color training all over the world through his two-volume text, The Interaction of Color. His research in color affected his studio work and such successive series—Treble Clef, Variants on a Theme and Homage to the Square, which have established his place in 20th century art history.

Albers was keenly aware that most often there are no words capable of expressing the realities of visual art experiences. Yet he spent years at the Bauhaus, Black Mountain and Yale University presenting his problems to students in such a way that they could only find release by discovering new solutions through pragmatic experiment. In order to present his ideas he found it necessary to invent a new vocabulary, to develop a ladder of experimental problems that could serve as a progressive stimulus to the eyes and minds of his students. Formulation: Articulation, published in 1972, is the artist’s fullest documentation of the visual exercises of his art pedagogy. The album is not an exhibition of his art but an embodiment of his experience. It is not printed, but rendered by original silk screen process, conveying the precise color experience of the artist’s color statement.

Sometimes accused of Germanic dogmatism, Albers was astonishingly open, saying: “There is never only one solution in art. Life is change…” and “When you really understand that each color is changed by a changed environment, you eventually find that you have learned about life as well as about color.”

The purpose of his color studies was to prove that color is the most relative medium in art, and that we almost never perceive what color is physically. He called the mutual influencing of colors interaction. He taught us that our optical reception can be turned inside out, so that we see opaque colors as transparent, and perceive opacity as translucence. Albers compelled his students to learn to see again, and to be questioning of their vision. He pointed out that color offers uncertainties and “perceptual ambiguities” where three colors can be made to look like four or like two, by changing their color environments. “Each color has different properties both as color and as buttery paste. Each has a different density; in spite of this, I want them all to behave; to do what I want and not what they want…One must taste and taste in order to cook just right…Until one has the experience of knowing he is being fooled by color, one cannot be expected to be very careful to look at things inquiringly. Only comparison entitles one to evaluation… I want to imbue others with my delight in the endless possibilities for new color experiences.”