Cretan cave art is from the Ice Age 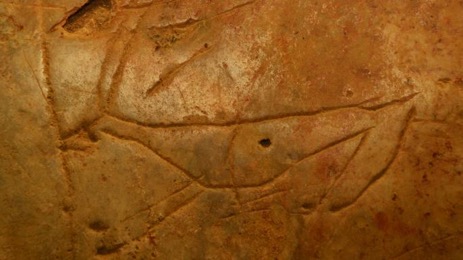 The earliest known Greek art has been identified in a cave on the island of Crete. Depicting extinct animals, it has been found to date to the last Ice Age and is more than 11,000 years old.

“This is the first palaeolithic art ever found in Greece,” says Dr Thomas Strasser of Providence College, Rhode Island. “It’s significant because it deepens the history of art there by many thousands of years, and is like an eyewitness account of Ice Age Crete. Archaeological and palaeontological information, as well as new technologies unavailable to earlier scholars, offer evidence to confirm a palaeolithic date for the earliest carvings.”

The Asphendou Cave, in the mountainous Sphakia region of western Crete, has been known for several decades, as have the petroglyphs, described by Strasser as “a confusing jumble of engravings that had eluded dating”. The confusion was caused by several layers of engraving superimposed on one another in the calcite flowstone of the cave floor, over an area of 1.15m by 0.8m (3.8ft by 2.6ft). When first noticed the animal depictions were thought to be of feral goats and possibly as late as the Bronze Age.

The oldest of these layers can now be shown to depict a species of recently identified fossil dwarf deer named Candiacervus ropalophorus, which became extinct more than 11,000 years ago. The species has unusually long antlers with short lateral tines, and specimens found not far north of Asphendou in caves on the north coast of Crete date to between 21,500 and 11,000 years ago, the period of upper palaeolithic cave art across Europe.

Art such as that known widely from France and Spain, from sites such as Chauvet Cave, Lascaux and Altamira, dating from 16,000 to more than 30,000 years ago, has been found on Mediterranean islands such as Levanzo, west of Sicily, but has hitherto remained unknown in Greece (despite Hammond Innes’s 1971 novel, Levkas Man, in which such art was found on the Ionian island).

“This is at least partly because suitable caves are rare in this seismically active region,” says Professor Curtis Runnels of Boston University. Known Greek palaeolithic art consists of portable objects — notched bones from the Klithi Cave in Epirus, and pierced marine shells from Klithi and the Franchthi Cave near Nafplio, he says.

Photogrammetry was used to record and then extract the individual quadrupeds, and the images compared with those made from excavated Candiacervus remains.

The 37 deer engravings identified at Asphendou are tiny — about 5cm long — and the engravings shallow. They represent “a palaeolithic animal herd without ground line or background”. Another palaeolithic artistic convention includes showing both antlers as though in three-quarter view, while the body is in profile, Strasser’s team report in the Journal of Archaeological Science.

“The last occurrence of the Cretan dwarf deer Candiacervus confirms the Asphendou rock carvings as the oldest figural art found in Greece,” they wrote. “Palaeolithic artists represented what they knew, in this case a prevalent species which became extinct in the upper palaeolithic”.

The Asphendou petroglyphs further our burgeoning understanding of Ice Age occupation on the Aegean islands, and add symbolic behaviour to our understanding of these people’s skills, Strasser notes.

“Asphendou is important for the teasing out of the different layers of art on the flowstone, showing that the animal representations belong to the earliest layer, and thus as the best candidate for palaeolithic cave art in Greece and the southernmost example of European-style cave art,” Runnels says. It also emphasises the early human presence on Crete, which has been an island for at least five million years, and thus needed some form of boat for it to be reached throughout prehistory.