Five Things You Should Know About Abortion in America 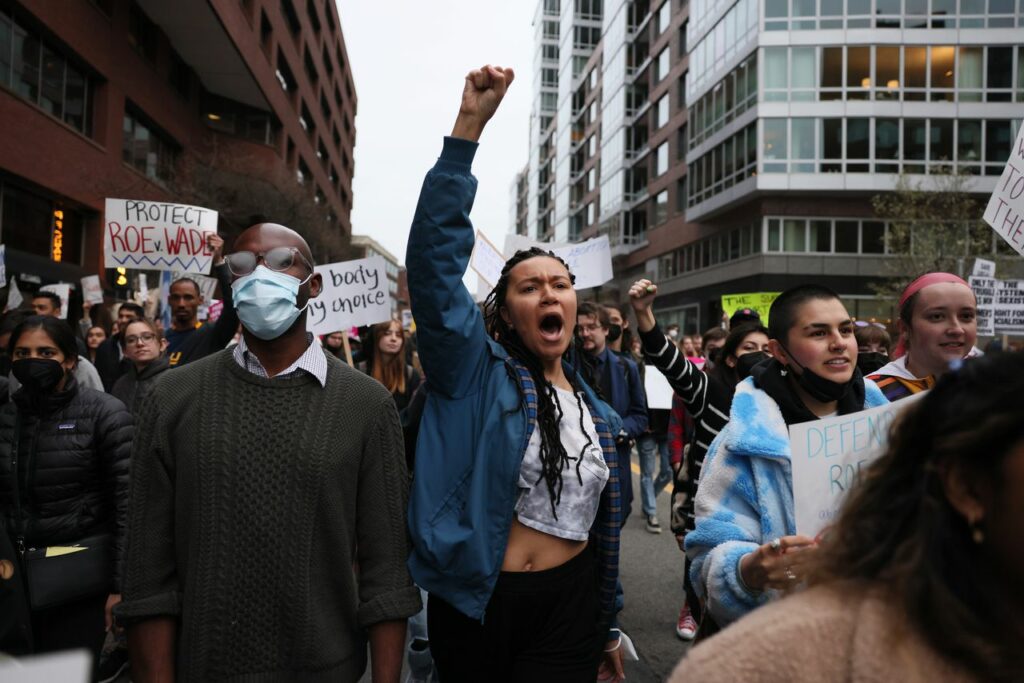 Nadia Frye Leinhos, CAR Assistant to the Deputy Directors (center) led a chant as she marched after an emergency rally for abortion rights at the State House on Tuesday, May 3, 2022. Photo Credit: Jessica Rinaldi, Boston Globe Staff

When the Supreme Court draft leaked, suggesting that Roe v. Wade would be overturned, I had a lot of questions. Namely, what is going on?

Abortion is both common and accepted, with nearly 1 in 4 women in America having an abortion by age 45 and 80% of people in America wanting abortion to be legal. The majority of people, regardless of their background, age, or education, support Roe v. Wade. Which means it shouldn’t be a surprise to find out that the majority of Americans do not support overturning Roe v. Wade, the landmark 1973 decision of the Supreme Court that made abortion legal in the U.S., according to recent polls.

So, what IS going on? And what can we do about it? Keep reading for five things you should know about abortion in America.

1. Abortion was not illegal until right after the Civil War

In America’s early years, it was not against the law to get, or perform, abortions before “quickening.” As Michele Goodwin, author of Policing the Womb: Invisible Women and the Criminalization of Motherhood, points out, when the Pilgrims arrived, the indigenous people were engaging in abortions. They had documented practices for abortion and reproductive care, including the use of various plants and herbs like dogbane and stoneseed for contraception and black root and cedar root as abortifacient agents. These practices prioritized women’s health, well-being, and quality of life.

And, despite what you may have heard, the Pilgrims were performing abortions, too! They relied on other women in their community, mainly skilled midwives, to choose when and if they would become mothers. It wasn’t until the formation of the American Medical Association (AMA) in 1847, by a group of white men, that abortion became illegal. AMA members appointed themselves as experts on maternal healthcare (spoiler alert: they weren’t), and pushed for legislation that excluded the women healers and midwives who, throughout history, had provided safe options for both birth and abortion.

The AMA’s anti-abortion campaign was led by Dr. Horatio Storer, who wanted to corner the lucrative market on maternal healthcare, and block women from entrance into Harvard Medical School where they could become competitors in the fields of obstetrics and gynecology. So, abortions were completely legal until the white male medical establishment got greedy, and felt that their profits were more important than both the livelihoods of women caregivers and the health outcomes of women patients.

As ever, racism and patriarchy intertwine to support white supremacist policy making.

2. Abortion in America has always been about both women’s rights and racial justice

The AMA also had another reason to outlaw abortion, a chillingly familiar one.

According to NYU law professor Melissa Murray, at this time: “the immigrant birth rate is swelling and the white birth rate is shrinking, and they are deeply, deeply worried that ‘America’ is no longer going to look like ‘America.’”

The efforts to make abortion illegal grew simultaneously from greed, and from fear of the Great Replacement theory, which Dr. Ibram X. Kendi calls: “the most diabolical of all racist ideas operating today.” And it is very much still operating today, with about half of the Republican party subscribing to this white-supremacist conspiracy theory, and ties to the Buffalo massacre.

3. Reversing Roe v. Wade wouldn’t ban abortions, but it would leave the issue to the states – disproportionately and unjustly harming Black people and other people of color

If Roe v. Wade is overturned, at least 26 states are “certain or likely” to ban abortions, according to data from Guttmacher Institute, a research group that supports abortion rights. And due to “trigger laws,” these bans would take effect immediately after the Supreme Court ruling.

You probably already have an idea of which states we’re talking about here (if not, here is a map). As co-founder of Inequality Media Robert Reich puts it, these are the states that are making it impossible to get an abortion but easier than ever to buy a gun. These states are suppressing votes, banning the teaching of America’s history of racism, and passing “bounty” laws on issues ranging from classroom speech to abortions to vaccinations.

The states most likely to ban abortion also have much greater proportions of people of color. In these states, abortions are already rarer than in states where abortion will remain legal. But this isn’t because people in those states don’t want or need abortions, it is largely because they can’t access them.

4. Even with Roe v. Wade, abortion is already difficult for marginalized groups to access and afford

For many people, abortion has been a right in name only. States have enacted more restrictions on abortion rights in the last decade than the decade before. Due to systemic racism, ongoing white supremacy, and coercive reproductive policies, current access to abortion largely depends on race — as well as financial status, health insurance status, and ZIP code.

So a disproportionate burden already falls on those already harmed most by societal inequities — women of color, young people, LGBTQ+ individuals, immigrants, people with disabilities, and those with low incomes. The poor — both white and people of color — are especially burdened by anti-abortion legislation because they can’t afford to travel to another state to get an abortion.

However, if Roe v. Wade is overturned, abortion access will be reduced even further. While Roe v. Wade alone is far from enough, it is still a crucial safeguard and the foundation on which to build a future where all people can get the care they need, want and deserve.

5. The fight for reproductive justice will continue

The Supreme Court is expected to reach their decision on Roe v. Wade by early July. But no matter what five justices on the Supreme Court decide, we still have the power to push for reproductive freedom — by casting our ballots for candidates who support abortion rights, making our voices heard through local and national rallies and protests, and supporting organizations that are working to ensure abortion access on the ground right now.

If you’re not sure where to start, Fair Fight, a collective that advocates for fair elections and other progressive issues, highlighted a few organizations protecting abortion access across the Southeast U.S. in a recent newsletter:

Grassroots activists, litigators, advocates, and scholars in the movement for reproductive health, rights, and justice have spent years preparing for this moment and are ready to lead the charge forward. Now is the time for those of us who believe in social justice and human rights to follow and support them. Are you ready? I know I am.

More about Center for Antiracist Research

Get the latest news on the people and programs at the BU Center for Antiracist Research via our monthly newsletter when you subscribe.

Become a force for change. Donate.

Donors to the BU Center for Antiracist Research are the very foundation of our work to educate, empower, and bring about an antiracist society. Please support us in this essential mission.