Class of 2022, Bachelor of Science in Business Administration and Management with concentrations in Information Systems and Strategy
Nashville, Tennessee

Jeffrey Lowe said he was used to getting As in high school, but that ease eluded him when he first arrived on campus.

“The first few tests here were not fun,” the Tennessee native recalls. “I had to study for hours. But knowing that people had my back went a long way in helping me meet those early challenges.”

Through increased discipline, trial and error, and academic support from the Educational Resource Center, Jeffrey soon found his groove. Then he was off and running, taking on two concentrations, becoming a Dean’s Host, a member of the Black Business Student Association, and a fellow in Questrom Ascend, a leadership program.

“My professor helped put into my mind the idea of ‘the skills to pay the bills.’” 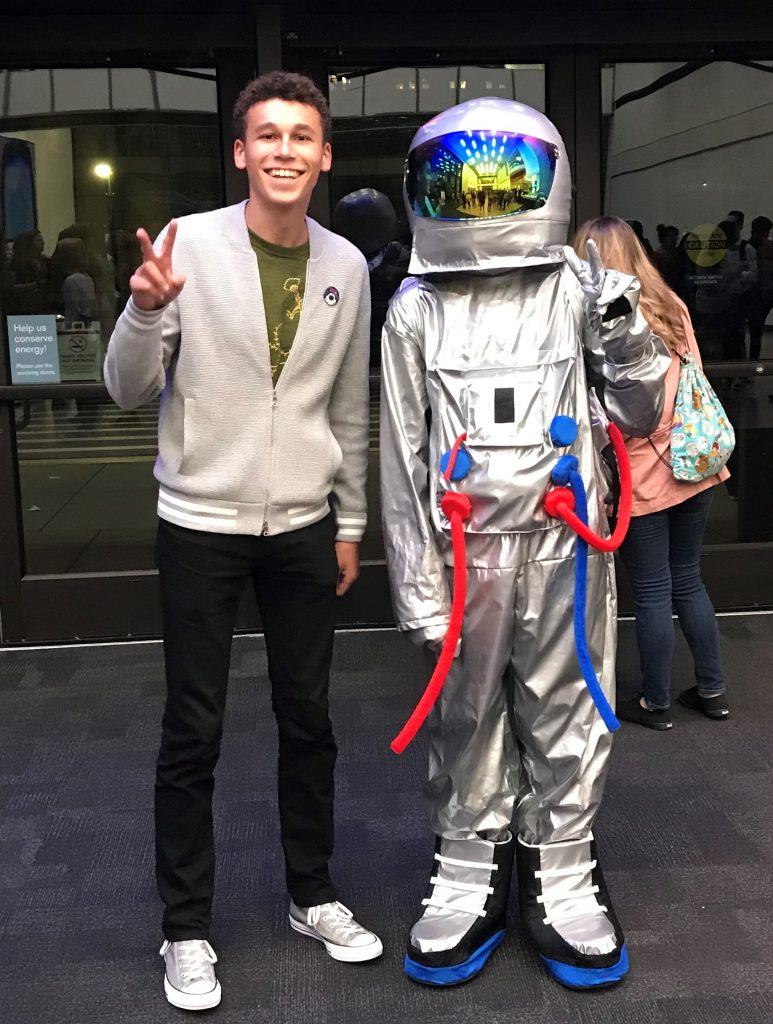 Today, that kid from high school seems like a distant memory, Jeffrey says. “In high school, I only looked at things from a one-sided perspective and my view was much narrower,” he recalls. “BU has helped me see things in multiple dimensions, not just academically, but in all parts of my life.”

Jeffrey credits his transformation to the deep connections he made on campus, both in and out of the classroom—from bonding with a Questrom professor and advisor who taught him “the skills to pay the bills” to a large-team business collaboration to discussions on how to increase diversity and inclusion on campus through his work at Questrom’s Center for Diversity, Equity & Inclusion (DEI) office.

In fact, his path at the DEI center was laid before he even matriculated.

“When I was applying to BU and went to Admitted Students Day, I talked to the director of the DEI center and he asked, ‘Why do you want to come to Boston?’ I said, ‘I really want to meet new people and experience new cultures.’ And he said, ‘That sounds like someone I’d want to hire for my diversity office.’”

Jeffrey also found connections within BU’s Wandering Minds Theater Club, working on the tech crew. “It’s really fun. Theater gives people an outlet to express themselves. And especially the week before the performances, when you’re there every day, you get really close with the people you work with.”

Jeffrey’s evolution took yet another turn when he chose to become vegan after learning through sustainability initiatives on campus the impact of diet on the environment. “I decided to try to eat only plant-based meals. The dining halls list vegan options, so that was helpful. BU has really made me more mature, and I realize all of my actions have consequences. Now, when I do something, even buying laundry detergent, I’m always thinking, what are the hidden consequences?”

After graduation, Jeffrey will start a full-time position with Ernst & Young as a technology-risk consultant.

To read the full interview with Jeffrey, please scroll below.

Q: When you got to campus, did you have a vision for your education?

A: I knew I wanted to pursue business. I was originally interested in marketing. But after the first class, I decided it wasn’t for me. I also knew that I wanted to go to school in a city, hopefully get internships, and then live in the city after graduation.

Q: Was there anything academically that knocked you back on your heels at first?

A: The tests and studying. In high school, we’d have tests every few weeks, and it was fairly easy to get an A. But here, it takes a lot more effort. It was really frustrating, and the first few tests were not fun. But eventually I learned to study. I signed up for tutoring at the Educational Resource Center for my calculus class, which was helpful. There was a lot of trial and error; increasing the amount of study time continually until I started getting better grades was another strategy.

Q: How did you land on your major and your concentration?

A: I originally came to Questrom as a marketing major, but then I began thinking about accounting. My sophomore year, I took IS 223, the Introduction to Information Systems class. Professor Jeffrey Allen convinced us that Information Systems is a really important, emerging field, and it clicked with me. It’s computer systems without the coding. Then, junior year, I decided to pursue strategy, too. It’s really interesting. You learn through the case studies of different corporations, see what strategic moves they’ve made, and apply them to other companies. For example, Starbucks recently added oat milk—what strategy are they pursuing? Are they eventually going to phase out dairy? What’s the next move here?

Q: Can you talk about an impactful collaborative research or academic experience?

A: In Questrom, usually junior year, there’s a program called Core (Questrom’s Cross Functional Core Project). It’s a whole semester, four related classes, and a final project that requires students to create a product or service and write a business plan on how they’re going to implement it. It’s like the magnum opus of Questrom. You’re in teams of 9 to 10 people. That was definitely very challenging, but very interesting. Having experience with a big team is really important. A lot of Questrom courses have teams, but they’re usually three to five people. So, with nine people it was a lot more coordination and cooperation. The professor gives more work, so you have to divide up the assignments and work together. My team had five people from the United States, and the other four were from different countries. It was really interesting to see how they worked and how they communicated. We split up into different sub-teams: marketing, operations. But you had to be careful not to let yourself get siloed. l learned a lot from the experience.

Q: Did you have a light bulb moment where you felt you suddenly understood something in a new way?

A: The closest thing I can think of was my Information Systems (IS) class and figuring out that I could concentrate in IS rather than in accounting. Professor Allen opened every class by saying IS concentrators get jobs, that this is an expanding field, that every organization needs it. So we had homework assignments using real software, gaining skills we could put on our résumés. A lot of classes are very theoretical, especially my Strategy classes, but if I want a job, I need to know what is going to be most applicable and what I should focus my time on. My professor helped put into my mind the idea of “the skills to pay the bills.”

Q: Is there one professor or researcher who had a particular impact on you?

A: Professor Allen. I also have a close relationship with Cecilia Yudin, the director of the Center for Diversity, Equity & Inclusion (DEI) at Questrom, where I do a Work-Study job. When I was applying to BU and went to Admitted Students Day, I talked to the director of the DEI center. He asked, “Why do you want to come to Boston?” I said, “I really want to meet new people and experience new cultures.” And he said, “That sounds like someone I’d want to hire for my diversity office.” So when I accepted BU, I emailed him and started working for him. He left after my first year, but I continued working for the center. Cecilia arrived in my junior year, and she’s become a mentor to me, especially as it relates to diversity in business. During our weekly meetings, we talk about different companies, if they’d announced new positions, advancements, and growth in various fields, and how we can support diversity efforts on campus.

A: Sophomore year, I went to Splash, the annual student organization fair and found this small theater club called Wandering Minds. I did theater in high school and I was on the tech crew, which means that I did lights, sound, and props. It was really fun. Theater gives people an outlet to express themselves. And especially the week before the performances, when you’re there every day, you get really close with the people you work with. I like being a part of the theater community at BU, but more behind the scenes like the puppet master.

Q: How has BU changed you as a student and as a person?

A: I’ve become more conscious about my actions and how my actions impact other people and other things. For example, my sophomore year, I learned a lot about climate change and sustainability initiatives and became interested in the impact of diet on the environment. I decided to try becoming a vegan. BU dining halls list vegan options, so that was helpful. BU has made me more mature, and I now realize all of my actions have consequences. Now, when I do something, even buying laundry detergent, I’m always thinking, what are the hidden consequences? In high school, my view was much narrower and I only looked at things from one perspective. BU has helped me see things in multiple dimensions, not just academically, but in all parts of my life.