The Robert Fitzgerald Prize is awarded annually by the BU Translation Seminar to the winners of a competition for the best literary translations from any language into English. The competition is open to both undergraduate and graduate students enrolled at BU.

Established in 1985, the prize honors the seminal work of Robert Fitzgerald, one of the great American translators of the 20th century. Fitzgerald is known especially for his versions of The Iliad, The Odyssey, and The Aeneid, as well as many classical plays, including Euripides’ Alcestis, and Antigone and Oedipus Rex by Sophocles. Through this prodigious output, it is widely held that Fitzgerald established the authoritative voice of the Greek and Roman classics in English for the reader of the mid- and late 20th century. 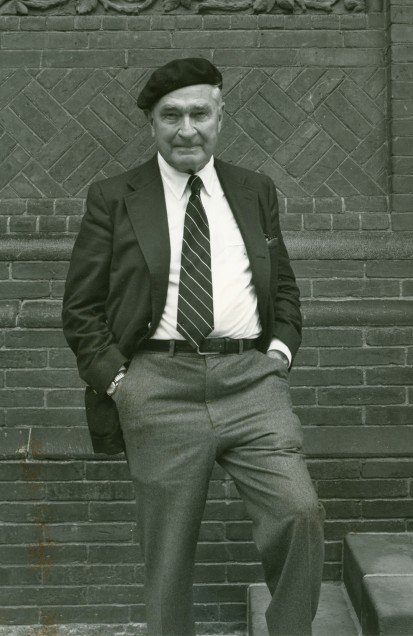 Robert Stuart Fitzgerald was born in 1910 in Geneva, Switzerland, and grew up in Springfield, Illinois. As an undergraduate at Harvard, where he studied Classics, he published a number of poems in Poetry magazine, the leading American journal of poetry.

After graduating in 1933, Fitzgerald embarked on a career as a journalist, work he pursued successfully until the outbreak of WWII. Fitzgerald enlisted in the Navy in 1943 and later served in Guam and at Pearl Harbor. After the war, he was an instructor of poetry at Sarah Lawrence and Princeton, and poetry editor of the New Republic. In 1952, having received a Guggenheim Fellowship, he moved with his family to Italy to begin a four-year project translating the Odyssey.

Asked about this period of his life in an interview in 1970, Fitzgerald said:

“Think of having before you every morning lines of beautiful Greek with the challenge of trying to match them in English, trying to make something as lightly running, as graceful, as sinewy and as interesting… and at the same time to avoid any stunting, metrical and otherwise, that might distract a reader from the main thing, which was always the dramatic action and narrative.”

Once published, Fitzgerald’s translation of Homer was immediately hailed by critics as “a masterpiece,” and as “the best and truest Odyssey in the English language.” Fitzgerald stayed in Italy a total of eleven years, but returned to the US every now and then to teach. In 1964 he returned to Harvard as Boylston Professor of Rhetoric and Oratory, a position he held until his retirement in 1981.

The idea for creating the prize and naming it for Fitzgerald came from Professors Rodolfo Cardona and Rosanna Warren, the founders of the translation seminar at BU. When they approached Robert Fitzgerald with this idea, he responded as follows: 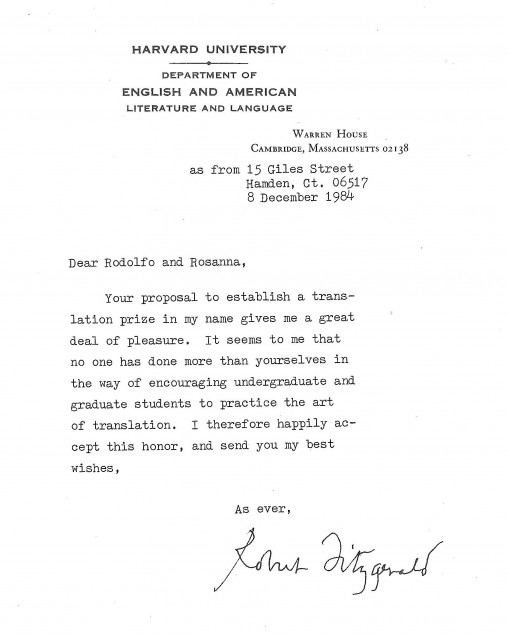 Robert Fitzgerald died in Hamden, Connecticut on January 16, 1985, after a long illness. A few months later, the prize was awarded for the first time, thanks to a generous donation by his widow, and with funds contributed by his friends and by the supporters of the BU Translation Seminar.