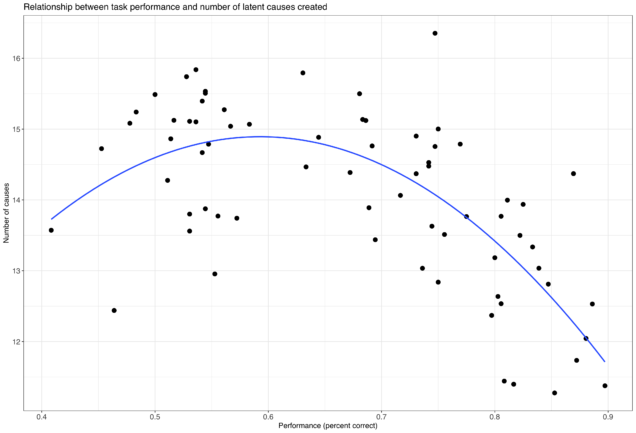 The characterization of how the brain learns and remembers is shaping applications across a variety of fields including psychology, medicine, computational sciences, and education. Structural learning theory attempts to explain learning as an inference of the deep statistical structure of stimulus-response relationships. With funding provided by the Office of Naval Research, Allen Chang in the Cognitive Neuroimaging Laboratory (CNL) is investigating how stimulus-response rules are defined by individuals in a context-dependent rule learning task and how the development of these rules contribute to individual differences in behavioral performance. This experiment asked subjects to learn rules in which the correct response to a pair of visual stimuli was modulated by context or independent of context. Bayesian inference was used to simulate the set of rules that each subject developed over the course of learning. The results showed that the number of latent causes developed by subjects has an inverted U-shaped relationship with performance. The latent causes in these strong performers showed high similarity to the inherent rules set by the experimenters. The latent causes in poor performers exhibited strong similarity for context independent rules, but poor similarity for context dependent rules. This suggested that learning for context dependent rules might be impaired by the influence of context independent rules. Though the development of latent structures can aid in long term learning, there appears to be limitations to generalizing these rule sets across experience.

Modeling the rule sets with latent cause analysis and simulating how likely they can predict the tasks’ rule sets with Bayesian inference can take over half a day on a local computer. RCS staff member Dustin Clark worked with Allen Chang to parallelize these methods and process them with the CNL ONR compute node on BU’s SCC producing results for 1000 simulations for each of 70 subjects in under two hours.