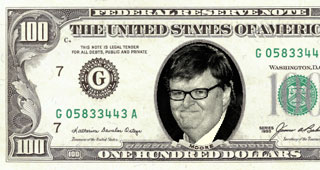 Capitalism is mixed up with big business and Wall Street bankers in Moore's economics-light movie.

In his latest film, Capitalism: A Love Story, Michael Moore, the world’s most successful documentary filmmaker, reaches a radical conclusion: “Capitalism is an evil.” He contends, “You have to eliminate it, and replace it with… democracy.”1 He wrongly blames capitalism for many economic injustices, and mischaracterizes the ideology along the way. At a time when audiences are particularly sensitive to economic issues, an iconic filmmaker like Michael Moore could have made the difference between a befuddled public and a successful response to crisis.

“What is Capitalism? Well, why should there be any question about it?”

This line is used early in Moore’s film to define the word “capitalism.” However, its vague meaning muddles Moore’s subsequent analysis. In the beginning of the film, capitalism is described as “a system of free enterprise” and “of giving and taking, [but] mostly taking.”1 Moore’s brevity creates a poor understanding of what capitalism means. What exactly is enterprise supposed to be free from? Later on, terms like “the profit motive,” “greed,” and “competition” are used interchangeably with “capitalism.”1 As the film progresses, the philosophical underpinnings of capitalism are increasingly ignored and the word becomes synonymous with the upper class, big business, and Wall Street bankers.

What Moore should have said is that the heart of capitalism is private ownership.2 This means that “the bulk of economic activity [is organized] through private enterprise in a free market.” A free market consists of producers and consumers who are reasonably free from government interventions.3 Such a market chooses goods and services at a quantity and price dictated by natural supply and demand.4

That doesn’t mean that capitalism is synonymous with anarchy. Society needs a strong state, consisting of police departments, court systems, roads/highways, and ground-breaking scientific research, in order to protect individuals.5 However, certain goods or services that society deems unhealthy, like drugs or prostitution, may be limited by the state.6

Competition between producers is also a critical component of the free market. An uncompetitive market may not be free because it can become monopolistic, which prevents any other firm from entering the market. A private monopoly is inefficient, underproductive and over-priced – competitors force producers to respond to customer needs. Those who do will earn customers and increase profits; those who don’t will go out of business.6 In several instances, Moore insinuates that capitalism necessitates war: “it’s easy to be number one when you have no competition.”1 Yet, for centuries capitalists have considered monopolies inefficient, and competition as essential, for well-functioning markets.6 Although war has sometimes been waged in the name of free markets and private ownership, it is ultimately a political phenomenon waged by governments using taxpayer dollars.

Had Michael Moore provided his audience with a more accurate picture of capitalism’s underlying principles, it would have quickly become clear that most of his grievances do not correctly highlight free and competitive markets.

When the owners of PA Child Care, a privately operated juvenile detention facility, bribed two federal judges to pack their facility full of youths, Moore says that “capitalism trumped democracy.”1 By sentencing large numbers of juveniles to long sentences in detention, the judges made the facility a more lucrative business, and were rewarded with millions of dollars in kickbacks. This type of public corruption is what capitalism hopes to avoid by advocating a reduction in government intervention.

Similarly, the $700 billion bailout of Wall Street is a perfect example of the kind of outside influence that Adam Smith criticizes in The Wealth of Nations. Smith, widely considered the father of free-market capitalism, lamented the way that corporations managed to exert a monopolistic influence due to substantial support from the British government.8 As a result, Smith would have been appalled by the Wall Street bailout. Yet, Moore understands the multi-billion-dollar bailout, which Wall Street “bought” from Congress, to somehow be an example of capitalism at work.

According to Moore, Wall Street made complex financial instruments “purposely confusing, so they can get away with murder.”1 It’s true that fraudulent loans and opaque derivatives made bankers rich, fueled a bubble in the housing market, exacerbated the market’s inevitable collapse, and dispossessed thousands of home-owners.9 It’s also true that deregulation in the financial industry inspired by capitalism made it easier for investors to profit from wild bets with other people’s money.9 But that is all a far cry from “murder.”

The film’s most damning critique of capitalism comes from a handful of Catholic clergymen, the only religious figures interviewed in the film. They describe capitalism as “radically evil,” “contrary to all that’s good, contrary to compassion, contrary to all the major religions.”1 Moore ignores the fact that one of the most important Islamic philosophers of all time, Ibn-Khaldun, was an intellectual precursor of Adam Smith, and that the historic marriage between Protestantism and individual economic rights gave birth to the American economic system.10,11 If capitalism should be judged by the moral authority of the Catholic church, then Moore should have interviewed the Pope. Here are just a few quotes from Pope John Paul II12:

“The free market is the most efficient instrument for utilizing resources and effectively responding to needs…The modern business economy has [as] its basis human freedom exercised in the economic field…[We] acknowledge the legitimate role of profit as an indication that a business is functioning well. When a firm makes a profit, this means that productive factors have been properly employed and corresponding human needs have been duly satisfied.”

Markets do need to be regulated properly, but Moore’s hysteria and obscurantism will not help the public keep politicians accountable for future legislation.

This is not to say that Americans should not feel robbed by capitalists. Bankers, mortgage brokers, regulators, and other self-described capitalists got rich by promoting bad and even fraudulent loans, particularly in the sub-prime housing market. This dishonesty caused a wave of mortgage defaults and foreclosures. Financial institutions made risky bets with borrowed money, yet were able to pay huge bonuses after the federal government saved them from collapse.9 Worst of all, it’s hard to tell whether politicians, regulators, or Treasury secretaries will work in the public interest when they’re under the influence of campaign contributions or the promise of a job on Wall Street.

What does all of this have to do with capitalism? Surprisingly, very little. In fact over the last three decades, capitalism has put many more people into homes than it has foreclosed, and has lifted millions of people out of poverty. Countries that have embraced capitalistic motives, like China and Vietnam, by adopting freer markets and denationalizing their economies are flourishing as a direct result.13

For a more sober reading of the relationship between capitalism and government, look to economist Joseph Stiglitz: “The real debate today is about finding the right balance between the market and government…both are needed.”16 Former IMF Chief Economist Simon Johnson’s recommendation, that the federal government nationalize, dismember, and re-privatize the biggest banks, should appease the angry taxpayer without “eliminating” free enterprise.17 Instead, many of the banking and mortgage industries remain subsidized even as the bankers and brokers who ran them continue making millions.18

The financial crisis is hard to understand. Three years after the crisis began, journalists still complain that they haven’t been able to convey the issue in a way a non-expert consumer can pick up and get value out of.19 Moderates need to be heard, but they can be boring. People would rather listen to the man on the street yelling jokes through a bullhorn. Thanks to his characteristic blend of populism, humor, and thorough research, four of the eight most lucrative documentaries of all time belong to Michael Moore.20 But in his latest film, Moore’s over-the-top vendetta against capitalism and topical inaccuracy have wasted an invaluable opportunity to analyze the current financial crisis.

9Bianco, Katalina A. (2008) The Subprime Lending Crisis: Causes and Effects of the Mortgage Meltdown. CCH Mortgage Compliance Guide and Bank Digest. Retrieved on November 10, 2009 from http://business.cch.com/bankingfinance/focus/news/Subprime_WP_rev.pdf.

11Weber, M. (2008). The Protestant Ethic and the Spirit of Capitalism. Nashville: Bn Publishing.