When can children understand the things they can’t see? 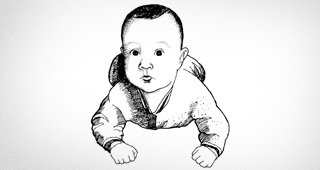 "Updating" is vital to human communication. When does it begin?

When children are taught about topics such as germs, distant planets, and historical figures, their teacher needs to ensure that the child can conceptualize the abstract or microscopic entity. Children have, for example, never met figures such as Abraham Lincoln, and thus the question arises about how to best teach them about the 16th president of the United States. Research on when children understand discussions about absent objects or entities will help us understand how we can teach them relatively abstract subjects.

Many different types of child development have been studied, recording the sequence of major developmental milestones all along. For example, children crawl before they walk and develop the ability to understand words spoken to before the can speak those same words.1 Many cognitive changes in children’s conceptions of objects have also been studied. For instance, infants expect objects to be solid and continuous by 5 months of age. In one study, children were shown a possible event and an impossible event. In the possible event, a screen moved until it reached a box. In the impossible event, the screen appeared to move through the box from the child’s point of view. The children were surprised by the result, as they expected the box to stop the screen.2 Other studies have shown that children by the middle of their second year can also think of objects as existing when they are not in view.

One question remains – when can children begin to update their representation of an absent object when told something new about it? “Updating” is when an individual is able to use new information to revise their knowledge of an object. This phenomenon is ubiquitous, as people learn new things about absent objects in their daily conversations. For example, people know that there are other planets even though they have not experienced them directly.

In 2007, Ganea, Shutts, Spelke, and DeLoache provided the initial evidence regarding the ability to update in young children aged 19 and 22 months. The children in their experiment were first introduced to two toys in a room, one of which was named “Lucy” to distinguish it from the other toy. The children were then led to another room without the toys. They were informed that Lucy became wet since water was spilled on her after they left. The children were subsequently brought back into the original room and presented with three toys: one wet Lucy, one dry Lucy, and one “distracter” which was a random toy that was wet. The 22-month-old children were able to update their representation of Lucy and correctly identify the wet Lucy. Meanwhile, fewer than half of the 19-month-old children were able to correctly identify which toy was the wet Lucy.3 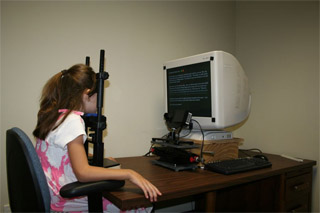 Eye tracking is recognized as a legitimate way to track children’s response to a situation.7 Using eye tracking equipment, it has been documented that infants at 24-months of age typically have one of three responses when hearing a word and looking at two different pictures. The child will: (1) maintain contact with the picture if the word heard is one of the pictures, (2) rapidly shift back and forth between the pictures if the word does not match either picture, or (3) slowly shift upon hearing an unrelated word.8 It would thus be highly beneficial to use eye tracking equipment gather more data about children’s ability to update their knowledge of absent objects.

Eye tracking is an effective way to study children who are too young to express ideas verbally. Saylor et al. conducted eye tracking experiments on children who can conceptualize absent objects and can also recognize them when referred to via language. By 12 months, infants appear to understand that absent objects exist.9 At 15 months of age, a child is able to recognize a reference to an absent parent.10 Upon hearing a reference to an absent familiar person, the infants looked toward the door or window and searched for the absent person. These results suggest that infants begin to understand references to absent objects by 15 months of age, even if their ability is fragile at that point. The question still remains – when is the exact time that children begin to update?

The ability to conceptualize absent objects and update is vital to human relationships. Without the ability to refer to the absent, communication via phone or any other method besides face-to-face would be impossible. Moreover, updating may not be exclusive to humans. Animals most likely utilize this ability in unique ways, such as communicating the location of a moving predator. If the animals were unable to update, they would not be able to picture a predator in a known environment. Still, the most pressing matter remains – during which stage of development do infants begin to update knowledge of absent objects when given new information? Understanding when humans can use the gift of updating will help us develop new techniques to teach children about absent objects. The ultimate goal would be to increase children’s language and world comprehension beginning at a younger age.