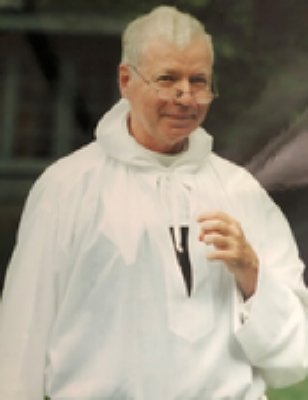 “Lewis S. Stone, Jr. (Lew) died at RiverMead Lifecare Community in Peterborough, New Hampshire, his home for 5 years. Lew is survived by his loving wife Eve, and their collective children and grandchildren: Blake, Toby, Sarah, Elizabeth, Benjamin, Mally, Jack, Frazer, Tasha, Nathaniel, and Cloe. Lew was the Rector at All Saints’ Parish in Peterborough, NH for 30 years, retiring in 2002. His life was devoted to his family, his parishioners, and the town of Peterborough. Lew will always be remembered for his kindness, his warm, inclusive smile, and his mischievous sense of humor. He loved gardening (winning ribbons for his dahlias and daffodils in Rhode Island and New Hampshire), the Boston Red Sox, travel, music, theatre, and art. He also loved to cook and play golf.

Lew was born in Danbury, Connecticut, the oldest of six children born to Lewis Seymour Stone, Sr., and Elaine Hurlbutt King. The family moved to Fort Worth, Texas in 1940 and shares many fond memories of a childhood growing up in the southwest which included Lew and his horse Skeeter and going to the rodeo. Lew graduated from Arlington Heights High School in 1955 and from Texas Tech University in Lubbock, Texas in 1959. Shortly after graduating from college he was called to serve in the Episcopal ministry. In 1962 he graduated with a Master of Sacred Theology from Berkeley Divinity School at Yale University in New Haven CT. In December of 1962 he was ordained to the Priesthood at St. John’s Cathedral in Providence, Rhode Island.

His early years as an Episcopal minister were spent in the Diocese of Rhode Island as Rector of Saint David’s-on-the-Hill in Cranston, Rhode Island. Rhode Island is where his three children were born. It is also where he developed a deep love for the island community of Block Island. In July of 1968 he held the first services in the ruined foundation of St. Ann’s-by-the-Sea, which had been destroyed by the hurricane of 1938. He served as the summer pastor at St. Ann’s for over a decade. In 1966 Lew spent February and March in Dacca, East Pakistan (now Bangladesh) in what he considered a “life-changing” experience. True to his nature, Lew kept and cherished the friends he made there to his dying day.

In 1971 Lew moved his family to Peterborough, NH, to become the Rector of All Saints Parish. He married Eve Anderson in 1980 and together they cherished the many friends and activities they enjoyed. In 1982 he received a Doctor of Ministry, Pastoral Counseling, from Boston University. During his 49 years in Peterborough he demonstrated his love of the town by serving on numerous boards and volunteer activities, which included HHC&H, The Grapevine, the A. Erland and Hazel N. Memorial Fund. He was one of the founders of the Monadnock Area Temporary Shelter (MATS) and the Monadnock Area Food Pantry now Peterborough Food Bank. He was a staff member of MAPS Counseling Services in Keene NH, and among his many awards and recognition was the Lions Club’s highest award for community service, The Melvin Jones Fellow award.

During his retirement Lew was an ESL tutor for students from Cambodia, Japan, China, Peru, France, and Tajikistan. Five of his students became US citizens. He served as the Priest in charge of: Trinity Church, Tilton, Church of the Rochester, and St. James Parish in Keene. He did Sunday Supply in Temple, Sullivan, St. Francis Chapel, Marlborough, Emmanuel Church, Dublin, Newport, Merrimack, Milford, Nashua, and Derry.

Lew fought a five-year battle with stage IV melanoma with Eve by his side. Together they navigated this painful chapter of his life. Those who were close to him watched the courage and determination he applied. He will be remembered and loved for so many things and perhaps mostly for his love of life. In addition to his wife and children, Lew is also survived by his brother, Robert, and his beloved sisters Judith, Christina, and Constance; his daughters-in-law Nina and Candace, and his son-in-law Bill; as well as Deborah Navas, the mother of his three children.

Details are to be determined regarding a funeral service. Memorial donations in memory of Lew can made to the Episcopal Relief and Development Fund and can be found at episcopalrelief.org.”

This obituary was originally published here, by Tribute Archive.