Hundreds Gather for Gala Honoring Those ‘Changing the World’ 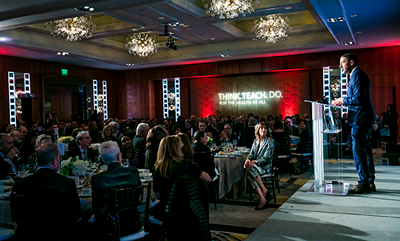 “Together, We Are Changing the World” was the theme of the School of Public Health’s For the Future of Public Health Gala, which gathered more than 350 community members, public health leaders, students, alumni, and friends of the school on November 1 at the Mandarin Oriental, Boston.

The evening affair celebrated the research, scholarship, and practice of SPH that has positioned the school as a global leader in educating public health professionals and translating research into innovative practice.

“Tonight is a night for optimism,” said Dean Sandro Galea. “It is true that we face many health challenges in 2018, but we are here because we are unwilling to accept the conditions that create poor health. This is why our school exists—to do something about it.”

Galea said the school’s progress in creating the next generation of leaders was part of the broader story of Boston University. BU President Robert Brown echoed the dean’s sentiments and optimism, saying that the university has played a role in helping society advance, and that there is much to be hopeful about, despite today’s challenges of poverty, disease, climate change, and addiction.

“We need leadership today more than we ever have in our history,” Brown said. “Boston University must lead in performing the research that will help solve these challenges and contribute to the comprehensive public policy solutions that must be implemented. I think SPH does just that, while training the next generation of public health leaders to do the same.”

Alumni Leadership Council Member Jane Pellegren noted the unique role that SPH alumni play in shaping the school’s initiatives. “As alumni, we can provide unique feedback to BUSPH that no other stakeholder can. We are the product.”

“It was always said that an ounce of prevention is worth a pound of cure,” said Zubeen Shroff, the gala’s co-chair and a member of the Dean’s Advisory Board. “I believe you have to get behind strong leaders and teams, and I’m happy to volunteer my time and attention alongside all of you.”

“I’ll call you on Wednesday [after the mid-term elections] to let you know my level of optimism,” Laguens joked, before marking on a more serious note that Planned Parenthood is still fighting for reproductive rights 102 years after its founding. “Women’s health care is just health care, and health care is a fundamental human right. What’s great about public health is that it is fundamental to a free and public society.”

A particular highlight of the night occurred when John Rosenthal announced that the parents of Joaquin Oliver, a student who was killed in the February 2018 mass shooting at Stoneman Douglas High School in Parkland, Florida, were in attendance. Rosenthal said that the gun violence epidemic is a “manufactured public health crisis of greed. This is the future is our children and we owe it to them to get involved in helping them feel safer.”

“I am so thankful for the communities, spaces, and individuals that supported me, included me, and brought me here, where I can stand safely and with authenticity say that I am a gay man, and I am so proud to be here,” said Lee. “It is on all of us to see and acknowledge every person, and to do all that we can to make it clear that hate and marginalization have no place here.”

The gala culminated with a musical performance by students from the College of Fine Arts. They performed a medley of songs, including “Shine Like the Sun” from the musical 9 to 5, “Shine,”which was written and first performed by Stoneman Douglas High School shooting survivors, and the “Finale” from the musical Runaways.