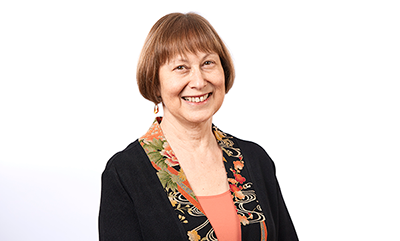 “We all deserve clean air and clean water, and it’s not up to us as individuals to achieve this,” says Ann Aschengrau, professor of epidemiology. For more than 30 years, Aschengrau has conducted research on the health impacts of environmental pollution, and for her commitment and achievements, she has been selected to receive an AEHS Foundation Achievement Award from the Association for Environmental Health and Sciences Foundation, Inc.

Aschengrau accepted the award at the organization’s 34th Annual International Conference on Soils, Sediment, Water, and Energy on October 17 at the University of Massachusetts at Amherst.

AEHS presents the Foundation Achievement Award to “individuals who have shown significant contributions to the field as well as outstanding environmental stewardship.” Aschengrau was nominated for the award by School of Public Health alumna Millie Garcia-Serrano, who received her Master of Public Health in 1992 and now serves on the Foundation’s board.

“Dr. Aschengrau did not just teach, but rather created a transformative and inclusive live classroom setting where everyone was given the responsibility of collective thinking that brought about scientific change for the greater good of the public and its health,” says Garcia-Serrano, who is currently the southeast regional director of the Massachusetts Department of Environmental Protection. “She and [SPH Professor of Environmental Health] Dr. Ozonoff were true mentors and the force behind my decision to graduate from BUSPH and serve the public, as I have since 1987.”

Aschengrau has led investigations on the relationship between drinking water contaminants and abnormal pregnancy and birth outcomes, neurological and behavioral disorders, and cancer. She is currently the project leader of a cohort study to examine the impact of early life exposure to environmental and social stressors on substance use. Part of the federally funded Boston University Superfund Research Program, the project focuses on Massachusetts families’ exposure to tetrachloroethylene, known as PCE, a widely used solvent in dry cleaning and textile processing that has contaminated drinking water in certain areas of Massachusetts and Rhode Island through water distribution pipes.

Aschengrau began studying the health impacts of exposure to PCE in 1988, and her research has shown that early life exposure to PCE is associated with substance use during adolescence and adulthood. She is currently working on a renewal proposal to study further the effects of environmental and social stressors on substance use in the New Bedford Harbor and surrounding areas.

A professor of Introduction to Epidemiology and Reproductive Epidemiology at SPH, Aschengrau also recently published the fourth edition of her textbook Essentials of Epidemiology in Public Health.

Aschengrau enjoys being able to execute her research ideas to completion and acquire data that propels the government to create policy changes—these days, more so at the local and state levels rather than the federal one.

“I think it’s such a wonderful privilege that I am able to achieve results that contribute knowledge to help reduce and, hopefully, eliminate people’s exposure to environmental pollutants,” she says.

Founded in 1990, the Association for Environmental Health and Sciences Foundation facilitates communication among professionals concerned with the challenge of soil, sediment, and water assessment, cleanup, and protection. It has provided an international forum for more than 600 members, industry experts, researchers, and governmental organizations to exchange information and advance awareness of environmental issues.