Home » News & Events » During Pregnancy, Smoking and Diabetes Are Riskier Together

During Pregnancy, Smoking and Diabetes Are Riskier Together 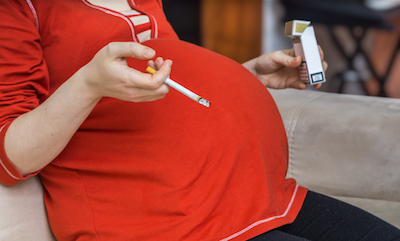 Smoking tobacco during pregnancy is one of the main modifiable risk factors for pregnancy complications. Having pregestational diabetes—that is, having diabetes before becoming pregnant—is the most common chronic condition complicating pregnancy.

Now, the first population-based study to look at the joint effects of smoking and pregestational diabetes during pregnancy, co-authored by School of Public Health researchers, finds the increased risk is greater than the sum of its parts.

“Our findings are consistent with previous observations that tobacco smoking can have a negative effect on blood sugar levels among diabetic women,” says study co-author Martha Werler, professor and chair of epidemiology.

The researchers used hospital discharge data from 5,780 deliveries in the Emilia-Romagna region of Northern Italy between 2007 and 2010, including 992 deliveries to women with pregestational diabetes. They used self-reported data on smoking at any time during pregnancy. To identify women with pregestational diabetes, the researchers used self-reported data, as well as data from diabetes registries for women in the Emilia-Romagna provinces of Modena and Reggio Emilia. The researchers used data from birth certificates to identify preterm births before 37 weeks and congenital abnormalities.