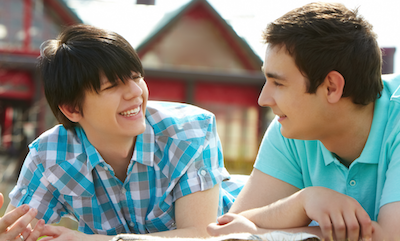 Young men who have sex with men (MSM) are at much higher risk of HIV infection compared to their peers, but a new study led by a School of Public Health researcher suggests young MSM are less likely to receive school-based HIV education than young men who only have sex with women.

In the study, published in LGBT Health, 84 percent of MSM reported learning about HIV in school, compared to 90 percent of men who had sex only with women. HIV education was associated with reduced sexual risk behaviors among all students, with much more dramatic reductions among young MSM than their peers.

“It is striking that the young people who are most at risk of HIV are least likely to report HIV education in school,” says lead author Julia Raifman, assistant professor of health law, policy & management. The authors wrote that young MSM accounted for 95 percent of estimated HIV diagnoses among adolescents aged 13 to 24 in 2015.

The researchers used data from the Centers for Disease Control and Prevention (CDC) Youth Risk Behaviors Surveillance System, which monitors health risk behaviors among US high school students. Because the national survey does not ask about the sex of sexual partners or about HIV education, the researchers used the 2011 and 2013 surveys from the 13 states that included this information for one or both of those years. States in the Northeast, Southeast, Midwest, and Southwest were represented.

The researchers then looked at responses to the question, ‘‘Have you ever been taught about AIDS or HIV infection in school?’’ In addition to finding MSM were less likely to receive HIV education than men who had sex only with women, the researchers also found differences within subgroups of MSM, with 81.1 percent of young men who had sex with both men and women reporting HIV education compared to 86.8 percent of young men who only had sex with men.

School-based HIV education was associated across the board with lower odds of having three or more partners in the past three months and higher odds of condom use at last sexual encounter. The researchers found the risk behavior differences associated with HIV education were much more pronounced in MSM than in men who only had sex with women, more than doubling the odds of using a condom at last sexual encounter and reducing five-fold the odds of having had three or more partners in the last three months.

The disparity in HIV education between young MSM and young men who have sex only with women “may reflect that sex education is often not inclusive of sexual minority students,” the authors wrote. “These findings are consistent with prior research indicating that YMSM do not feel that sex education materials designed for the general population are pertinent to their needs.” The authors noted only 24 percent of schools teach or provide supplementary materials about safe sex for sexual minorities, with seven states currently banning positive discussion of same-sex sexual behavior or orientation by school teachers or staff members, and three states requiring inclusion of negative information about sexual minorities in sex education.

“I am hopeful that this evidence will prompt more states to make sex education inclusive of gay, lesbian, bisexual, and transgender populations,” Raifman says, noting that nine states currently mandate inclusive sex education and that Massachusetts is considering a bill to make sex education inclusive. “Condoms and pre-exposure prophylaxis (PrEP) are very effective approaches to preventing HIV, but they won’t do any good unless those most at risk know about them,” she says. “All young people deserve to learn about how to protect their health.”