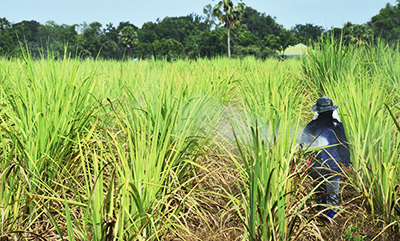 The epidemic of kidney disease among young Central American agricultural workers may be the result of heat stress and volume depletion, according to new research led by the School of Public Health and published in the National Kidney Foundation’s American Journal of Kidney Diseases.

The findings offer the latest clues about an epidemic that has led Nicaragua and El Salvador to have some of the highest age-adjusted mortality rates from kidney disease in the world.

For the study, researchers followed 284 sugar cane workers in seven different jobs from one company in northwestern Nicaragua. Blood and urine samples were collected from participants before and near the end of the six-month harvest season.

Cane cutters—the workers who had the most labor-intensive jobs—had increased urinary NGAL and IL-18, both biomarkers of kidney injury.

“These individuals have the most physically strenuous jobs in a high-heat setting,” says lead author Rebecca Laws, a postdoctoral associate at SPH. “They are also being paid by the amount they cut. It’s a system that can increase physical strain.”

While self-reported hydration didn’t seem to offer any protective benefit to sugar cane workers overall, when workers were stratified by job, researchers observed a protective effect of consuming an electrolyte solution among cane cutters and seed cutters. This indicates that there may be ways to prevent kidney injury among laborers in high-heat settings.

A research team led by SPH has been probing factors contributing to the unexplained epidemic of chronic kidney disease in Central America, which disproportionately affects young, male agricultural workers, since 2009. The illness is not related to diabetes or hypertension—the most common drivers of kidney disease in the United States.

Recently, the research team reported in the journal Nephrology Dialysis Transplantation that adolescents in areas of Nicaragua with high mortality from chronic kidney disease had elevated rates of biomarkers of early kidney injury compared with children in areas with lower mortality rates—suggesting a predisposition that may reflect environmental or genetic influences.

Laws says the epidemic is “a public health emergency, but we still don’t fully understand why this is happening. . . . Most researchers believe the causes are multifactorial, and it is at least in part related to occupation, given the severe toll that kidney disease is taking on heavy manual laborers in the region.”

In Nicaragua and El Salvador, age-adjusted mortality rates from kidney disease are among the highest in the world. According to researchers, the prevalence of kidney disease in affected communities is 12 to 18 percent in the general population and 14 to 26 percent in men, with age-specific rates among younger men up to 15 times higher than in the US.

The authors noted some limitations to the new study, as they didn’t directly measure heat or exposure to chemicals. Job category was used a surrogate for exposure.

Laws says the team is planning a longitudinal study in Nicaragua and El Salvador in sugar cane and other industries to further investigate kidney disease in this region. Also, says Laws, “we are also doing a cross sectional study in adolescents and children to find other potential sources of kidney damage in this population.”

Thomas Manley, director of scientific activities for the National Kidney Foundation, says he hopes the new study would “promote more research on whether hydration status has a significant impact on progression of kidney disease. (Prior) studies on the benefit of water intake for those with kidney disease have been mixed. It certainly seems intuitive that persistent physical stress and dehydration could negatively impact kidney function, but further work on the relationship of hydration and kidney disease is needed.”

The study was partially funded by the Comité Nacional de Productores de Azúcar (CNPA) and the World Bank. Funders did not have the opportunity to review or influence the content of the paper prior to publication.