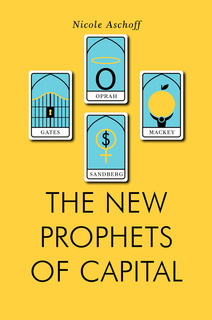 “Mythmaking is as central to sustaining our economy as proft-making, particularly as severe environmental degradation, breathtaking inequality, and increasing alienation among youth push capitalism against its own contradictions.”

In her newly published book, The New Prophets of Capital, Adjunct Professor Nicole Aschoff discusses the “new generation of wealthy mythmakers, masquerading as progressive thinkers,” who have emerged during this time of crisis “to reinvent the free market as the solution to society’s problems.” From Oprah to Sheryl Sandberg, John Mackey to Bill and Melinda Gates, these “new prophets of capital buttress the exploitative system, even as the cracks grow more visible.”

Nicole argues that “if we are serious about addressing the miseries and anxieties on which these prophets prey, […] we must give up our belief in the inevitability of the capitalist system that they mythologize.”

The New Prophets of Capital is available from Verso Books.

Congratulations to Assistant Professor Saida Grundy for publishing her article "Lifting the...