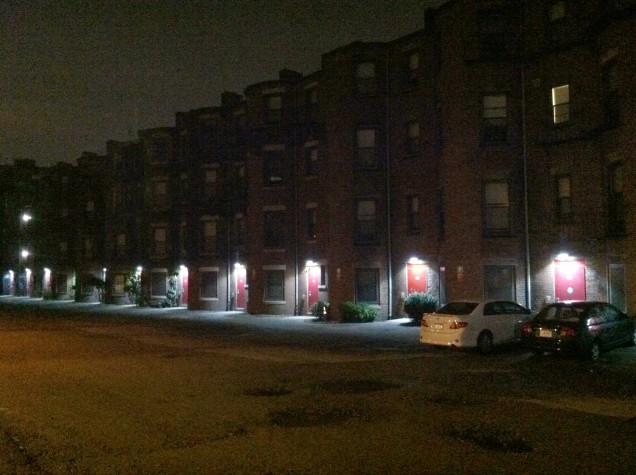 Have you noticed the lights on campus are changing?

Over the past few months the University has been upgrading outdoor lights on buildings across campus and replacing the old metal halide bulbs with more energy efficient light-emitting diode (LED) bulbs. LED bulbs use less power (watts) relative to the amount of light generated (lumens) and also help to reduce greenhouse gas emissions by saving energy. Two-hundred A19 (typical screw-in base) LED bulbs can save enough energy per year compared to a 60W incandescent to power an entire home in the United States all year. These A19 LED bulbs can last up to 25,000 hours while metal halide bulbs usually last about 2,500 hours. The Custodial staff is using the freed up labor to expedite this upgrade effort to other sections of the campus.

The replacement of these lights is part of a larger energy saving initiative that also includes the retrofitting of interior light fixtures with more efficient bulbs across campus to create a unified standard of lighting. Since the sustainability initiative began in September 2008, 14 lighting retrofit projects have been done across 12 locations including the Fitness & Recreation Center, Agganis Arena, Mugar Library, Sargent College, George Sherman Union, College of Arts & Sciences, and Myles Standish Hall. Metal halide, T12, and other lower performing fluorescent bulbs were replaced with high-performance super-T8 or T5 fluorescent bulbs which typically use 10-15% less energy. All halogen bulbs were replaced with more efficient LED or compact fluorescent (CFL) bulbs. These projects have resulted in a savings of 5,794,883 kWh/year and 2,706 metric tons of CO2e/year, which equals 497 cars or 69,385 trees.

In addition, all new buildings on campus are being outfitted with energy efficient lighting. The use of LED lighting in the new Center for Student Services helped to reduce lighting energy consumption by 53% over a typical building of the same type. Recently the lights in the alley adjacent to the Center for Student Services were upgraded as well with fixtures that are 44% more efficient than the existing lights. LED A19 bulbs are also being installed in boiler rooms and mechanical spaces with high ceilings, replacing the CFL lamps installed within the last two years to save even more energy.

Since the bulbs last much longer than before there is also a significant reduction in maintenance and cost as they don’t need to be replaced as often meaning in-house staff can be used more efficiently. The project has resulted synergy between environmental awareness and operational efficiency. Tim O’Connor, FM&P’s Electrical Manager, is extremely happy as the need for routine bulb replacement has drastically decreased which allows for his staff to provide better services in other areas. The routine building lamp replacement labor savings have also allowed custodial staff to maintain higher cleaning standards.

The next phase of the project will be the replacement of the incandescent bulbs in pole lights across campus. So far 2 pole lights have been retrofitted with LED and there are plans to replace 50 more, all of which would be eligible for a rebate from NSTAR.