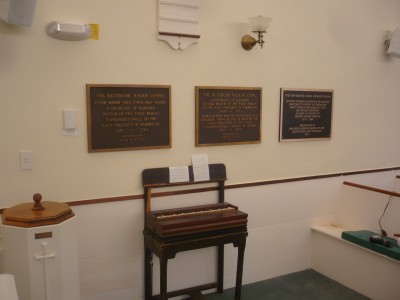 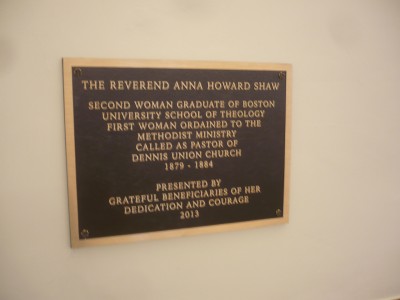 Dennis Union Church in Dennis, MA  is the church Anna Howard Shaw served.  They have recently added a plaque commemorating her accomplishments and time of service there.

The plaque reads:
“The Reverend Anna Howard Shaw.
Second woman graduate of Boston University School of Theology.
First woman ordained to the Methodist Ministry.
Called as Pastor of Dennis Union Church
1879-1884.
Presented by grateful beneficiaries of her dedication and courage. 2013.”

A Tribute to Anna Howard Shaw

As with any reformer, or any person in history who challenges the status quo—it’s easy to label Shaw as a rebel, a rabble-rouser if you will.  But, she would not have seen herself that way.

Ultimately, Shaw spent the bulk of her career fighting for women’s suffrage—this was not a cause that she came upon accidentally—it was the logical conclusion to all of her prior experiences. By the time she was 38, she had received her medical degree and began working with mothers, children and prostitutes in the slums of Boston.  She realized that she needed to look beyond the symptoms and seek to fix whatever the underlying reasons were for the condition of these women.  The combination of this experience and the challenges she faced in becoming an ordained minister led her to the fight for suffrage.    Though Shaw had been a preacher for some time before her ordination—she only served as a minister for five years.  Then, she turned her attention to reform because she felt that women could only truly have a voice—both in religion and secular society—if they had the vote.  Particularly revealing is the fact that after she left the ministry, she discouraged young women from becoming ministers because it was too difficult “to fight the church in addition to the devil.”  Until women were seen as equals in secular society, it would be impossible for them to be equal in the church.  As a result, she entered the fight for women’s political rights.  It was then that she believed “[her] real work had begun.”

The arguments against female ordination are similar to the arguments that were made against woman suffrage.  Among them are that women must remain committed to home life, and be the center of the family—ordination or suffrage would be certain to have a negative impact on that role.  And, the perception persisted that women were of weaker mind than men, were more emotionally driven, and therefore not capable of holding such leadership positions, or making important political decisions.

So, Shaw approached the fight for suffrage in much the same way that she approached her fight for ordination.  She pointed out the hypocrisies and inconsistencies that existed in the nation.  She argued that the “definition of the republic was betrayed by women’s disenfranchisement.”  What she sought was consistency between the country’s principles of democracy and the practice of the American government. And, she had to prove her point to women as well as men.  Her arguments aimed at men were based on the basic tenets of American democracy:

“God Created all men equal and endowed them with certain inalienable rights among which are life, liberty and the pursuit of happiness—and no man will deny that they are the rights of myself, as well as the rights of himself—to protect those rights governments are instituted among men, deriving their powers from the consent of the governed.  I have no further argument to offer, it is all there.” And that,

She argued that America was an “aristocracy of sex,” and could not understand why women would stand for this—even why women would argue against suffrage.  The arguments she made to women also focused on their position in the republic:

“I cannot understand a daughter of the American Revolution who is opposed to the enfranchisement of women, who glories in the death of an ancestor who died for the principle of no taxation without representation.  I cannot understand the inconsistency.”

Shaw could not fathom the hypocrisy and inconsistencies offered by those who opposed suffrage, just as those who opposed female ordination.  To her, the proof was simple—based on textual evidence, and the ideals on which the nation was founded.