When Meghan Graham was an undergraduate at Ithaca College, her speech pathology professor pulled her aside after class, but not to discuss homework. “This may be personal,” she said, “but do you smoke?”

Her professor was concerned about the raspy quality of her voice, which could signal the presence of vocal nodules, callus-like growths on her vocal cords. Graham, a nonsmoker, was surprised; she’d always had a husky voice and didn’t have throat pain. She made an appointment with an ear, nose, and throat doctor, who did find nodules, which were surgically removed.

Graham, who was studying to become a speech-language pathologist, learned that the nodules were likely caused by vocal hyperfunction, a common but little-understood disorder in which a person may develop too much tension in the muscles of the larynx by controlling them incorrectly. She tended to start sentences too forcefully and talk at length without taking a breath, habits made worse during her year working as a server in a restaurant while in college. “It was eye-opening to see that a voice disorder could happen to anyone,” says Graham (’06), now a lecturer and clinical supervisor at Sargent.

A voice disorder can particularly affect people who rely heavily on their voices, such as teachers, lawyers, and performers. Up to 9 percent of the US population has experienced a voice disorder, ranging from laryngitis to nodules to throat cancer. These disorders stop the vocal cords from working properly and can cause discomfort and pain. They can also prevent speaking and singing. If left untreated, or if treated unsuccessfully, a voice disorder can cause permanent damage. One major factor in voice disorders is believed to be elevated laryngeal tension, a condition that can occur when people create excessive tension in the larynx—the mechanism that produces sound—by pushing their voices too hard.

9.4 million US adults have had voice trouble lasting 1+ week in the last 12 months

Cara Stepp, an assistant professor of speech, language & hearing sciences, has developed a tool that uses an acoustic measure of small changes in people’s voices, called relative fundamental frequency (RFF), that will make estimating laryngeal tension easy, noninvasive, reliable, and affordable. That’s critical in helping patients through voice therapy. The tool, which is being tested for use in clinical practice, will also help speech scientists better understand how vocal hyperfunction works.

Voice problems start in the larynx, a small organ at the top of the trachea that contains the vocal cords. These two bands of tissue vibrate as we push air from our lungs through them, creating sound at a particular frequency—or rate of vibration. Speaking or singing too forcefully increases tension in the larynx and can prevent the vocal cords from vibrating properly. 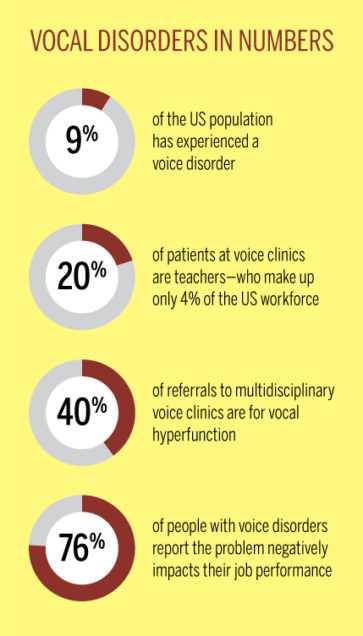 Knowing a patient’s laryngeal tension can be helpful in therapy, but it’s difficult to measure. To diagnose and treat voice problems, clinicians often need to examine the vocal cords. The trouble is, “the larynx is not exactly easy to get to,” says Stepp; you can’t feel much of it with your hands through the skin. That means using invasive methods, such as an endoscopy, which involves inserting a camera-fitted scope into the airway through the nostril. A typical endoscopy system costs roughly $80,000, says Stepp. “These are things that you see at big voice clinics, not at a school-based therapist’s office.”

But laryngeal tension can also be assessed indirectly through a correlate—something related to laryngeal tension. Stepp thinks RFF is the correlate to use. The tool she’s created could provide clinicians with some of the same in-depth information gleaned from an endoscopy, she says, but “without having to stick anything inside anybody, which is both expensive and unpleasant.”

RFF is measured from small frequency changes in our voices just before and after we say a voiceless consonant (such as “p,” which doesn’t cause the vocal cords to vibrate). If you have a healthy voice, laryngeal tension temporarily increases when you produce these consonants; that in turn increases RFF. But if, says Stepp, you have vocal hyperfunction and already have high laryngeal tension, “your ability to create these short-term increases will be reduced, and that produces lower RFF.” Lower RFFs could therefore indicate the presence of laryngeal tension.

Stepp is the first to study RFF in individuals with vocal hyperfunction and explore its potential for estimating laryngeal tension. She and her collaborators also gave RFF its name. Until less than a decade ago, she says, RFF was just “a random acoustic feature people noticed in healthy people’s voices. There was no reason to think it was clinically useful.” Then a 2008 study in the Journal of Voice reported that people with Parkinson’s disease had lower RFFs than people of the same age without Parkinson’s. That got Stepp’s attention. Parkinson’s had long been known to affect the larynx and articulation, and to cause rigidity in the body. Could the low RFFs in people with Parkinson’s disease signal the presence of elevated laryngeal tension? The study authors had posited that as one explanation.

Stepp found evidence supporting the hypothesis. Her research revealed that people with vocal hyperfunction, the most common voice disorder associated with laryngeal tension, have low RFFs on the same scale as those of people with Parkinson’s. She also showed that patients with hyperfunction who received successful behavioral therapy with a speech-language pathologist increased their RFFs to levels closer to those of healthy voices.

Although Stepp’s research indicates that RFF shows promise for assessing vocal hyperfunction, it hasn’t been sufficiently tested for approval in clinical use. That’s because there hasn’t been a simple, standard, objective way to measure it until now. RFF is too subtle for the human ear to pick up, and evaluating it is laborious. One method involves examining the movements of the vocal cords to measure their stiffness—just like a physical therapist might evaluate the stiffness of a limb by watching it in motion. This requires capturing images from video endoscopy, then measuring the angles of the vocal cords’ movements. Stepp’s new acoustic measure can provide the same information without invasive endoscopy and time-consuming calculations.

She is working on the project with a team of clinicians, scientists, and engineers at Sargent, the BU School of Medicine, and Massachusetts General Hospital. The tool, whose development received $10,000 in funding from the American Speech-Language-Hearing Foundation and $480,927 from the National Institutes of Health (NIH), consists of two parts. The first is a microphone, such as that on a high-quality, handheld digital recorder or a smartphone. The second is computer software that Stepp’s team created. They came up with algorithms—a series of steps used by a computer to make calculations—that enable the software to compute an automatic reading of RFF based on the voice recording. Stepp’s team plans to make the software program available for free on the website for the STEPP LAB for Sensorimotor Rehabilitation Engineering at BU later this year.

So far, Stepp’s research with healthy adults is promising, showing the acoustic measurements of RFF to be as reliable as established methods like the one obtained with the endoscope. But to take her tool into clinical practice, Stepp needs to prove its validity on a larger scale, performing more detailed studies involving people with injured voices that are examined over a longer period of time.

The Future of Voice Therapy

Stepp and a group of colleagues including Joseph Perkell, a senior research scientist at Sargent, and Pieter Noordzij, a professor of otolaryngology at MED and an affiliate professor at Sargent, have received a roughly $2 million Research Project Grant (R01) from the NIH to expand their research on the ability of the acoustic RFF measure to estimate laryngeal tension. They will assess how well it stacks up against established methods and how efficiently it tracks changes in laryngeal tension in two sets of people: those with Parkinson’s, as their disease progresses, and those with vocal hyperfunction, after they’ve undergone therapy.

The R01 grant will also help Stepp and her collaborators complete a project they’ve been working on for five years: a voice reference database for clinicians. Just as your doctor can determine your healthy target weight based on your height, sex, and age, therapists would consult this database to give you a score corresponding to what a healthy voice for your age, sex, and condition (Parkinson’s disease or no Parkinson’s disease) should sound like. Clinicians would then help you achieve that score. Stepp says it could potentially also act as an aid in diagnosis.

Stepp’s tool could provide clinicians with the same information as an endoscopy, but without the invasiveness and expense.

Graham says a tool like Stepp’s would have helped her in therapy, which wasn’t prescribed for her after surgery and which she obtained at Sargent as a volunteer research subject for Stepp. Along with promoting healthy vocal hygiene—such as staying hydrated, breathing from the diaphragm for support, and resting her voice—Stepp’s tool would have given Graham and her clinician a reliable way of tracking her progress. Stepp says her acoustic measure would never replace a laryngologist’s diagnosis of a voice problem, but it would help “easily, quickly, and frequently track progress through therapy or through other intervention like surgery.” It would also aid research aiming to validate behavioral treatments and surgeries.

It may be 5 to 10 years before Stepp’s tool is in widespread use by clinicians. In the meantime, she helps prevent voice disorders by raising awareness about proper vocal care. In 2015, she co-organized a voice awareness day for voice performance majors from Gordon College in Wenham, Massachusetts. The event included an anatomy talk, vocal hygiene counseling from Sargent faculty and students, and endoscopies. “They got to do some of their warmups and sing some tricky passages and then talk through” what they noticed about their vocal cords with the professionals, says Stepp, who hopes to repeat the event this fall. With this vocal knowledge, the future Adeles of the world will better know when to rock—and when to give their voice a rest.