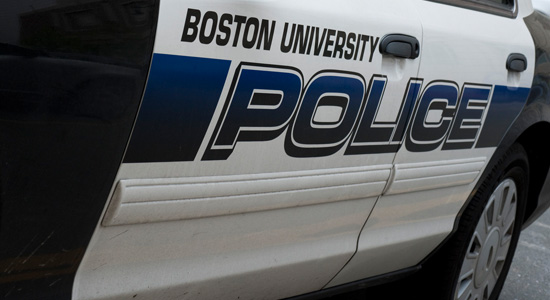 The Boston University Police Department (BUPD) responds to and investigates crimes, maintains order and safety, and enforces Massachusetts laws and University regulations in and around the Boston University Charles River and Medical Campuses. The department is committed to community-based policing. The BUPD is a full-time, professional law enforcement agency that also provides a wide variety of public services—including emergency medical assistance—to the Boston University community. Patrols are conducted throughout the campus area 24 hours a day. Emergency response time is generally under three minutes to any location on campus.

Boston University employs more than 50 state-certified police officers. All new officers complete the same five-month police academy training required of municipal officers in the Commonwealth of Massachusetts. Each officer must also complete at least 40 hours of additional classroom training a year, and must demonstrate safety and proficiency with issued equipment, such as firearms, twice each year. Additionally, all officers receive tactical training in the event they must respond to a potentially violent individual or situation. Officers also take specialized training courses offered by the International Association of Chiefs of Police and other professional organizations.

All Boston University police officers are empowered by the Commonwealth of Massachusetts to enforce criminal laws and to make arrests, not only on the campus grounds but also in the areas surrounding the University. They also hold appointments as Deputy Sheriffs of Suffolk County, Middlesex County, and Norfolk County. The prosecution of all criminal offenses are conducted by the prosecuting attorneys of the relevant jurisdiction and typically are addressed in Brookline District Court, Boston Municipal Court or Suffolk Superior Court.

The Boston University Police Department has an excellent record for the arrest and prosecution of criminal offenders. Our work has received formal recognition from the Boston Police Commissioner and from the Suffolk County District Attorney’s office. The department is widely recognized as one of the best-trained and most professional law enforcement agencies in Massachusetts. Members of the BUPD attend community meetings of the many residence associations to provide residents with up-to-date crime prevention information and to hear their concerns about crime and safety issues. The Boston University Police Department is among the few university police departments certified by the Massachusetts Police Accreditation Commission.

Through coordination with local law enforcement agencies, any reported criminal activity engaged in by students at off-campus locations is monitored and recorded. This information is provided to the Dean of Students for possible disciplinary action.

The Chief of Police and Executive Director of Public Safety for Boston University reports directly to the Vice President for Administrative Services (617-353-6500).

If you have a complaint about our police service, we wish to address and resolve it quickly and fairly. Please contact the Patrol Supervisor on duty at 617-353-2110 or contact the Chief of Police and Executive Director of Public Safety (32 Harry Agganis Way, Boston, MA 02215) at 617-353-2127.