See the CAS online bulletin for all the courses offered by the Religion Department. 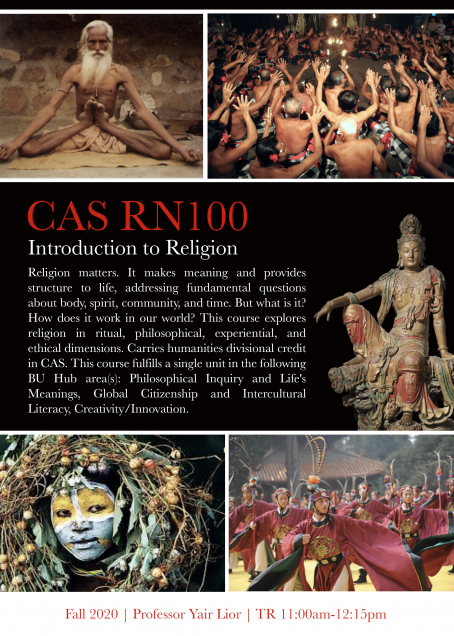 CAS RN100:  Introduction to Religion
Yair Lior
A1 TR 11:00AM-12:15PM
C1 TR 2:00PM-3:15PM
Religion matters. It makes meaning and provides structure to life, addressing fundamental questions about body, spirit, community, and time. But what is it? How does it work in our world? This course explores religion in ritual, philosophical, experiential, and ethical dimensions.  This course fulfills a single unit in each of the following BU Hub areas: Philosophical Inquiry and Life’s Meanings, Global Citizenship and Intercultural Literacy, Creativity/Innovation.

CAS RN101/CAS JS 120:  The Bible
Michael Zank  MWF 12:20PM-1:10PM
Introduction to the great canonical anthologies of Jews and Christians. Students will learn to read for historical context and genre conventions; study classical and modern strategies of interpretation; and create a collaborative commentary or piece of “fan-fiction.” Carries humanities divisional credit in CAS. This course fulfills a single unit in each of the following BU Hub areas: Aesthetic Exploration, Historical Consciousness, Creativity/Innovation. 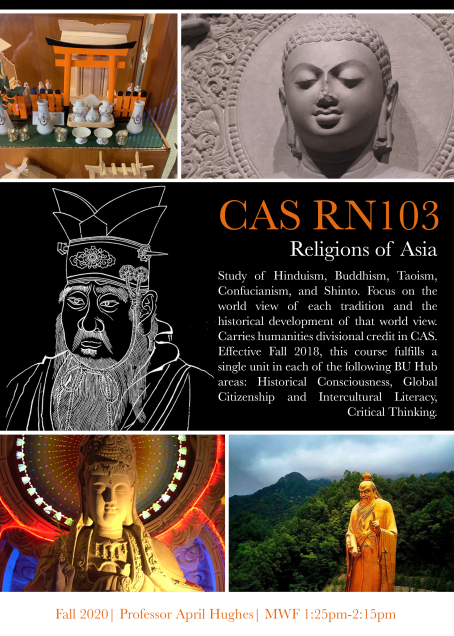 CAS RN104/CAS JS 110:  Judaism, Christianity, & Islam
Jonathan Klawans  MWF 11:15AM-12:05PM
Islam, Christianity, and Judaism in historical and cultural context, origins to the present. Examines diversity of practices, belief systems, and social structures within these religions. Also addresses debates within and between communities as well as contemporary controversies and concerns. Carries humanities divisional credit in CAS. This course fulfills a single unit in each of the following BU Hub areas: Historical Consciousness, Global Citizenship and Intercultural Literacy.

CAS RN200: Theoretical Approaches to the Study of Religion
Teena Purohit  TR 9:30AM-10:45AM
Origins and history of the academic study of religion. Different constructions of religion as an object of study and the methods that arise from them. The role of the humanities and social sciences in understanding religion’s place in history and contemporary experience. 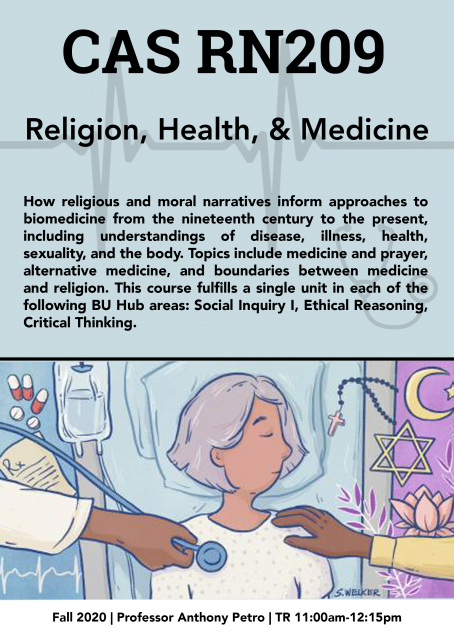 CAS RN209 : Religion, Health, and Medicine
Anthony Petro  TR 11:00AM-12:15PM
How religious and moral narratives inform approaches to biomedicine from the nineteenth century to the present, including understandings of disease, illness, health, sexuality, and the body. Topics include medicine and prayer, alternative medicine, and boundaries between medicine and religion. This course fulfills a single unit in each of the following BU Hub areas: Social Inquiry I, Ethical Reasoning, Critical Thinking. 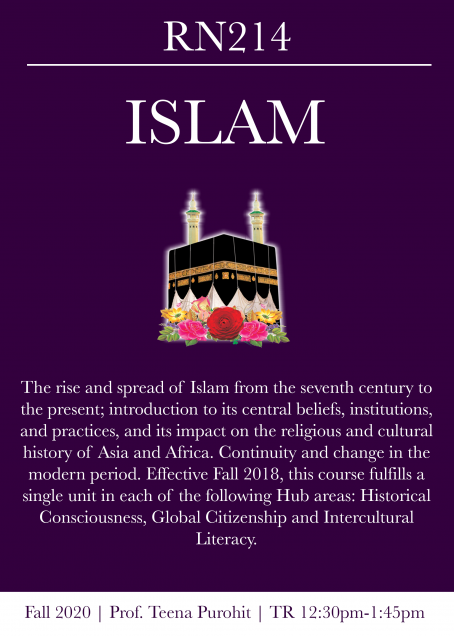 CAS RN214:  Islam
Teena Purohit  TR 12:30PM-1:45PM
The rise and spread of Islam from the seventh century to the present; introduction to its central beliefs, institutions, and practices, and its impact on the religious and cultural history of Asia and Africa. Continuity and change in the modern period. This course fulfills a single unit in each of the following BU Hub areas: Historical Consciousness, Global Citizenship and Intercultural Literacy.

CAS RN301/GRS RN601/STH TH817: Varieties of Early Christianity
David Frankfurter  TR 2:30PM-3:45PM
Surveys the many different and often competing forms of Christianity that arose and flourished in the second to the seventh century, from the “apostolic period” to the Arab conquest in the Middle East.

CAS RN310/CAS HI209:  The Reformation: Religious Conflict in Early Modern Europe
Phillip Haberkern  MWF 9:05AM-9:55AM
Examines religious change in sixteenth- and seventeenth-century Europe, particularly the origins and causes of the Protestant Reformation, the parallel Catholic Reformation, and the consequent military conflicts in Germany, France, and the Netherlands. This course fulfills a single unit in each of the following BU Hub areas: Ethical Reasoning, Social Inquiry I.

CAS RN328/CAS JS255/GRS RN628/STH TX828: Judaism in the Modern Period
Steven Katz  TR 12:30PM-1:45PM
Exploration of complex encounters between Judaism and modernity from the Renaissance and Reformation to expulsion from Spain and creation of Jewish centers in the New World; emancipation and its consequences; assimilation, conversion, Reform Judaism, Zionism, the American Jewish community, modern anti-Semitism.

CAS RN364/GRS RN664/STH TX878: Buddhist Literature
Laura Harrington  TR 2:00PM-3:15PM
Focuses on Buddhist sutras and other literature to explore key issues of doctrine, philosophy, and praxis in the Theravada and Mahayana traditions of Buddhism. Topics include the Buddha’s life, practicing the path, emptiness, and interdependence.

CAS RN385/CAS CI269/CAS XL281/GRS RN85:  Representations of the Holocaust in Literature and Film
Nancy Harrowitz  TR 11:00AM-12:15PM
Questions of representation in literature and film about the Holocaust, including testimonial and fictive works by Wiesel and Levi, Ozick, and others; films include documentaries and feature films. Discussions of the Holocaust as historical reality, metaphor, and generative force in literature. This course fulfills a single unit in the following BU Hub areas: Historical Consciousness, Ethical Reasoning.

CAS RN397/GRS RN697/CAS PH456/STH TT821: Topics in Philosophy and Religion
David Eckel  W 5:45PM-8:30PM
Topic for Fall 2020: Buddhism as Philosophy. An exploration of important recent developments in the study of Buddhism as a form of philosophical reflection. Topics include Buddhist philosophy of mind, the nature of religious knowledge, Buddhist critiques of rival traditions, and Buddhist accounts of the path to nirvana. This seminar is designed to run side by side with the Institute for Philosophy and Religion’s fall lecture series on “Buddhism as Philosophy.” 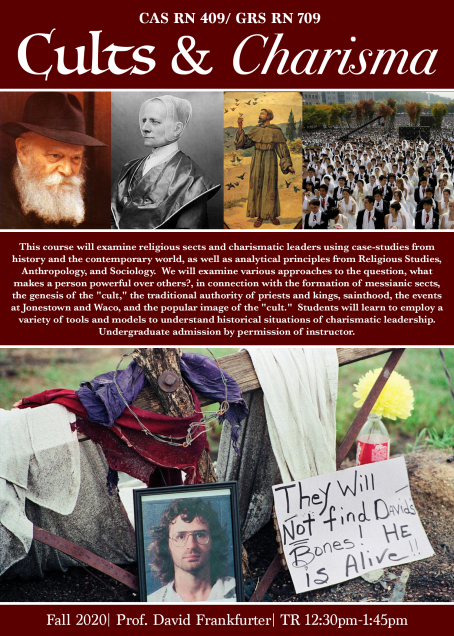 CAS RN409: Cults & Charisma
David Frankfurter  TR 12:30PM-1:45PM
This course will examine religious sects and charismatic leaders using case-studies from history and the contemporary world, as well as analytical principles from Religious Studies, Anthropology, and Sociology.  We will examine various approaches to the question, what makes a person powerful over others in connection with the formation of messianic sects, the genesis of the “cult,” the traditional authority of priests and kings, sainthood, the events at Jonestown and Waco, and the popular image of the “cult.”  Students will learn to employ a variety of tools and models to understand historical situations of charismatic leadership. The course will conclude with a research paper or, for undergraduates, a final essay on an assigned topic. Undergraduate admission by permission of instructor. 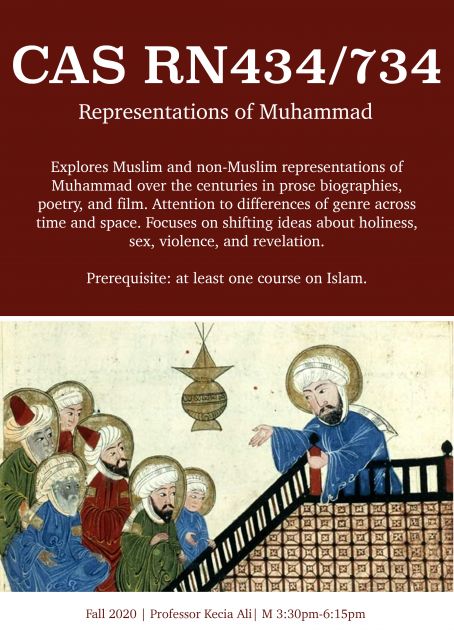 CAS RN434/GRS RN734/STH TX839:  Representations of Muhammad
Kecia Ali  M 3:30PM-6:15PM
Explores Muslim and non-Muslim representations of Muhammad over the centuries in prose biographies, poetry, and film. Attention to differences of genre across time and space. Focuses on shifting ideas about holiness, sex, violence, and revelation. In Fall 2020, the course will focus devote substantial attention to American polemical treatments of Islam’s prophet from the colonial era to the present.

CAS RN452/GRS RN752/STH TT838: Topics in Religious Thought
Anthony Petro  T 3:30PM-6:15PM
Do we live in a secular age? What forms does religion take in the modern world? How do we understand the relationship between religion and secularism? This seminar exams the growing field of secularism studies and postsecular critique, including its intersections with religious studies, anthropology, feminist and queer studies, and critical race theory. Possible authors include Michel Foucault, Talal Asad, Saba Mahmood, Winnifred Sullivan, Peter Coviello, Vincent Lloyd, and Ann Pellegrini.

CAS RN561/CAS PO589/CASIR561/STH TX874: Religion and International Relations
Jeremy Menchik  TR 12:30PM-1:45PM
Explores the role of religion in contemporary international relations in the context of questions about the common core of modernity. Reviews scholarly and policy literature, and case studies, in order to elucidate religion’s intellectual and operational diversity in international relations.

CAS RN100
Introduction to Religion
Faculty: Stephen Prothero
MWF 1:00PM-2:00PM
Religion matters. It makes meaning and provides structure to life, addressing
fundamental questions about body, spirit, community, and time. But what is it? How does it work in our world? This course
explores religion in ritual, philosophical, experiential, and ethical
dimensions.

CAS RN101
The Bible
Faculty: Michael Zank
MWF 11:00AM-12:00PM
Designed for the student who will take only one or two courses in religious
studies, this course introduces the Bible as a foundational source of Western
culture. In addition to basic knowledge of Hebrew and Christian scriptures, the
student may expect to gain an appreciation of biblical themes in Western
literature and art.

CAS RN102
Sacred Journeys
Faculty: Emily Hudson
MWF 2:00PM-3:00PM
An introduction to the comparative study of religion through the theme of the
sacred journey/religious quest in Buddhist, Christian, Hindu, and popular
literature. Topics include heroic, romantic, and/or mystical quests; voyages to
the underworld; apocalyptic and post-apocalyptic journeys.

CAS RN103
Religions of the
World: Eastern
Faculty: David Eckel
MWF 12:00PM-1:00PM
Study of Hinduism, Buddhism, Taoism, Confucianism, and Shinto. Focus on the
world view of each tradition and the historical development of that world view.