Why do Airbnb hosts and guests rate each other so highly?

Georgios Zervas, assistant professor of marketing at Boston University Questrom School of Business, is well-versed in the often dubious world of online reviews. Most recently, he has been exploring Airbnb with two colleagues from BU College of Arts & Sciences: Professor of Computer Science John W. Byers and Davide Proserpio, a PhD student in computer science.

Browse the reviews on the online accommodations rental platform, which as become hugely popular since its founding in 2008, and nearly every host has a stellar reputation. Every room is squeaky clean and every location is ideal. The title of Zervas’ working paper on Airbnb ratings says it all: “A First Look at Online Reputation on Airbnb, Where Every Stay is Above Average.”

In an analysis of over 600,000 Airbnb properties, writes Sara Rimer in a BU Research piece, the group discovered that nearly 95 percent of the listings received either 4.5 or 5 stars, the highest possible rating. “They contrasted this with the ratings of about half a million hotels around the world listed on TripAdvisor, where the average is a much-lower 3.8 stars, and there is more variation across individual reviews,” Rimer reports. “One important distinction the BU researchers took into account: unlike Airbnb, TripAdvisor allows guests to rate hotels, but not vice versa.”

So, what’s the difference? When guests and hosts are able to rate each other, the exchange feels more personal, so both parties are more inclined to give a favorable review, according to Zervas and his colleagues. Plus, on Airbnb, a host can reject a potential guest, so guests need positive reviews just as much as the hosts do. Reputation is everything.

Rimer sat down with Zervas to talk two-way reviews, why Airbnb users are seeing stars (and lots of them), and how the company’s ratings should be viewed.

BU Research: Can you explain the part of your study where you looked at cross-listed properties on both Airbnb and TripAdvisor?

Zervas: Some hotels—a small fraction—list their properties by the room on Airbnb. So, in our study, we looked for properties that are cross-listed on Airbnb and TripAdvisor and then we compare and contrast their ratings. And we found first that on Airbnb, they get higher ratings—and, second, that somehow these ratings are not correlated.

What do you mean they’re not correlated?

Suppose that we take all these cross-listed properties and we rank them by average rating on Airbnb. Maybe Hotel Tropica is first, some other place is second. Then we look at the same properties on TripAdvisor. Well, the rankings are completely different. 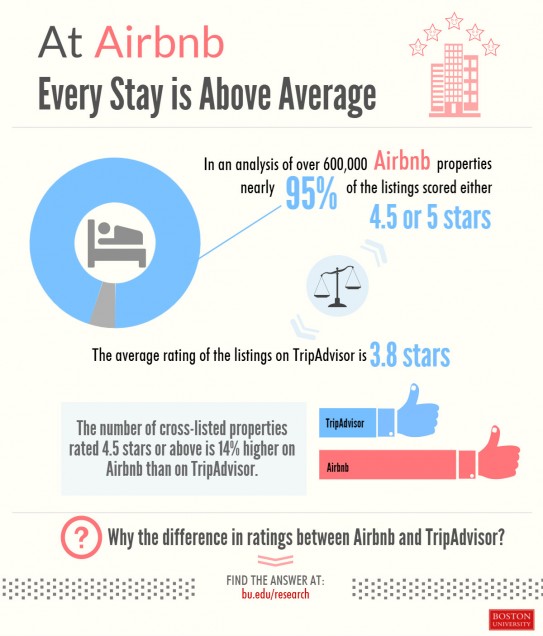 So, are the rankings on Airbnb meaningless?

They’re not meaningless, but it does raise some concerns. One thing we have not ruled out is that people with different tastes use different sites. This is something we’re exploring. I do believe that Airbnb users have different tastes than TripAdvisor users, but I don’t think that explains every observation in our data. I cannot believe that Airbnb users would like dirty places or bedbugs, so the question now is: Are these exceptions? Is the phenomenon more widespread? We don’t have an answer yet, but we do notice this pattern where the ratings are really all over the place. These are the same properties, but they’re ranked in a different way across the two sites. Can this be attributed only to differences in tastes between Airbnb users and TripAdvisor users, or is there something else going on?

Is it possible that on one day, the place really was better than on the other day—like with restaurants?

But why would it be consistently better on days when Airbnb users are visiting?

Yes. This is what happened on eBay. Sometimes on eBay, you would hear stories that there was communication between the two parties after the transaction—possibly, both parties were saying, ‘Okay, you better give me a good rating if you want a good rating back.’ So I think, depending on how pushy you are, you can play that strategy on Airbnb. 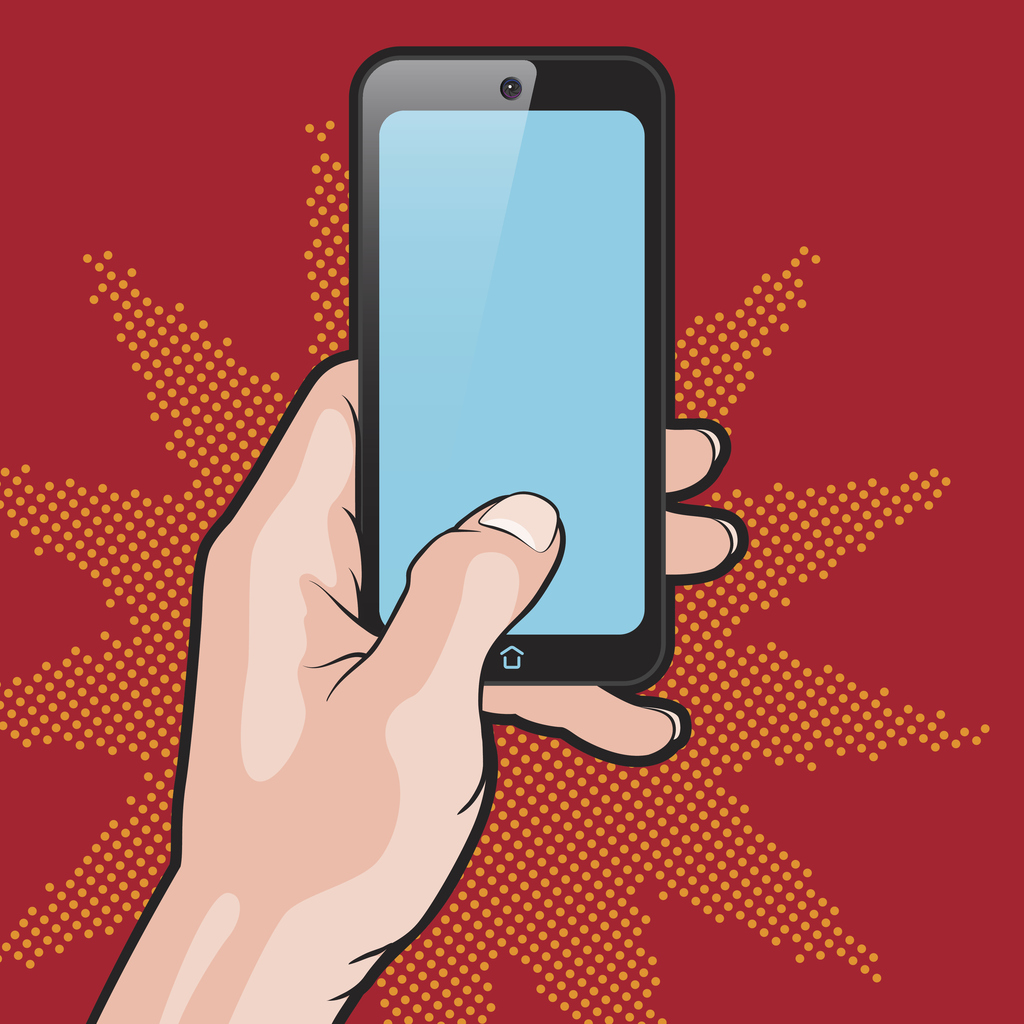 Seniors Kristin John and Brian Harrison recognized as stellar standouts from a nationwide pool of nominees. Since 2016, the annual Poets & Quants Best & Brightest list has honored 100… 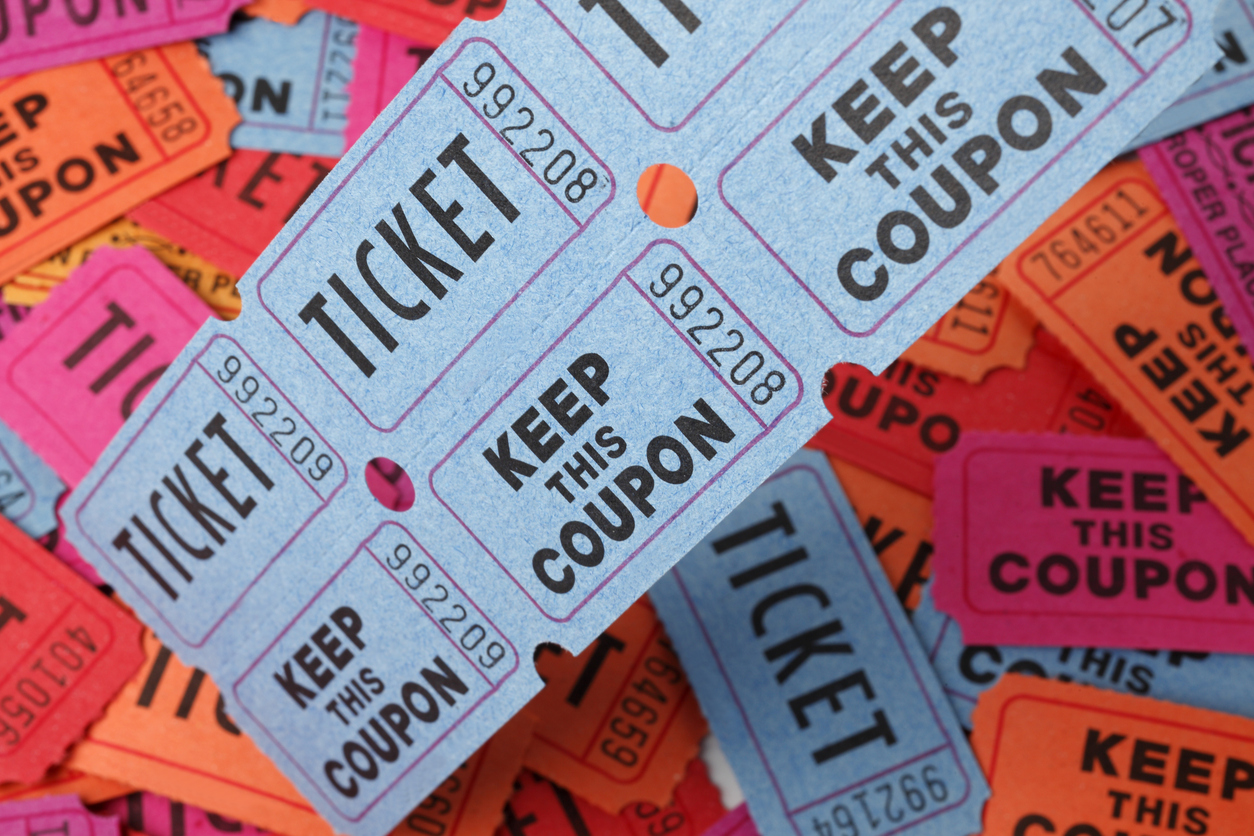 Fewer Options for the Win