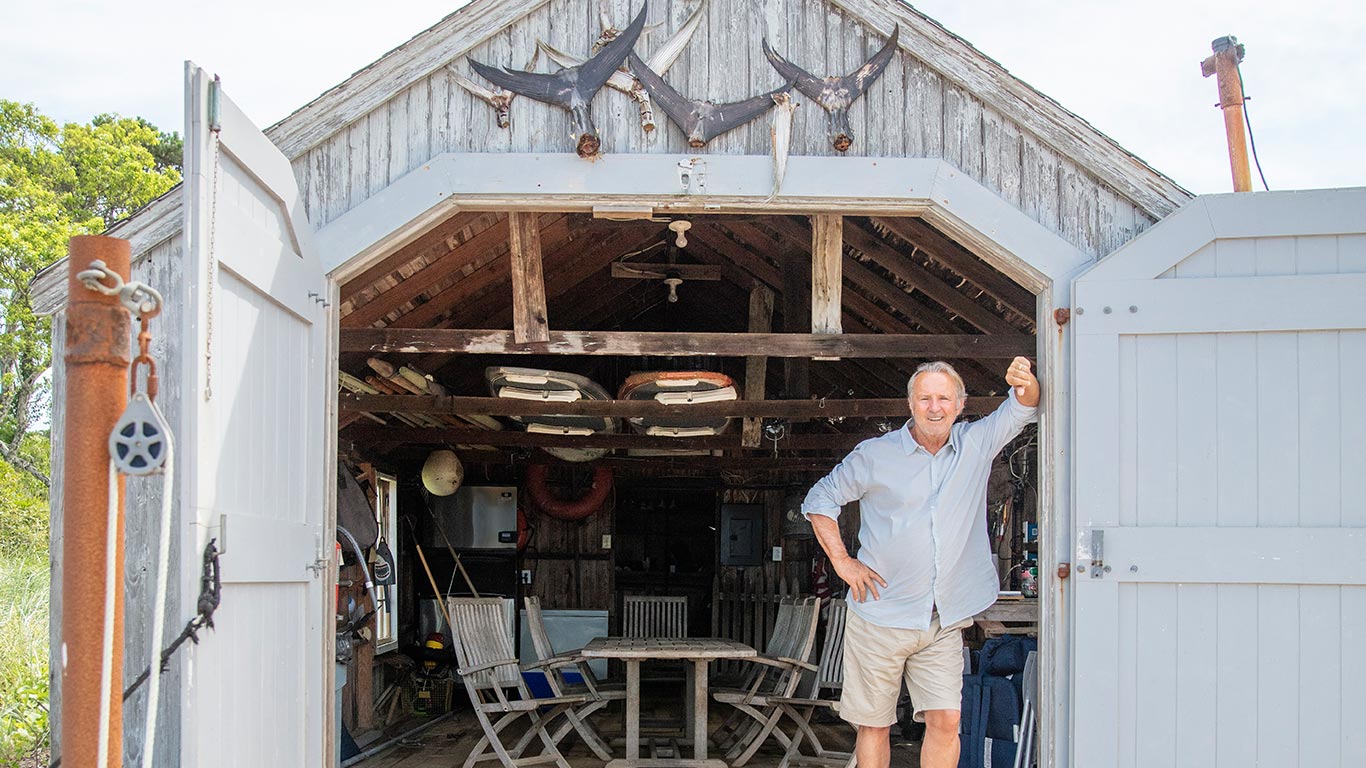 Jay M. Cashman (BSBA’75) on his island off Chatham, Mass.

Jay M. Cashman sits at a conference table in the office of his Back Bay Victorian mansion.

Natural light pours through tall windows as he sips his coffee. The construction mogul also owns an island off the coast of Chatham, Mass., and a medieval castle in Ireland; the Doobie Brothers played his 60th birthday bash.

The chair of Jay Cashman, Inc., based in Quincy, Mass., Cashman (BSBA’75) leads one of the biggest privately held contracting firms in the Northeast, working on projects around the globe. The company has humble origins: Cashman and his brother schlepping around their native Quincy in a truck, hauling dirt; the sign outside Cashman’s first rented office was hand-painted by his then wife. In recent years, Jay Cashman, Inc. has repaired the dock surrounding the USS Constitution, deepened the tidal strait between Staten Island and New Jersey, and led a $21.2 million project to reclaim a Bermudan island. It was also a contractor on Boston’s Big Dig, the 15-year project to bury 7.8 miles of highway running through the city that finished just over a decade ago.

As an entrepreneur, Cashman has shown a knack for spotting business opportunities—and getting in before others realize their chance has evaporated. His latest bet? Wind power.

After an investment of approximately $250 million, Cashman now leads the largest private renewable wind energy company in New England, producing about 100 megawatts of electricity. Patriot Renewables operates four wind farms in Maine and has partnerships in California and Illinois. And, Cashman says, the work has made his businesses overall—including construction units that burn diesel fuel—carbon-neutral.

When he talks about his business journey, Cashman refers to multiple moments when his interest and an opportunity dovetailed: his foray into renewables is one of them. Cashman says he decided to enter the wind business after being selected as the contractor to build the Cape Wind project off the coast of Cape Cod, Mass., a $2.6 billion offshore wind farm that promised to be the first of its kind in the United States. That project eventually faltered, following political opposition and regulatory setbacks. But Cashman says his firm learned a great deal about the approval and engineering processes: “There’s a lot of complication with getting a power contract, to get delivery of the turbines, to tie up the land, to get the permits, make sure that there’s wind there, to get the transmission out into the grid. It’s kind of like making a soufflé. Everything has to go in at a certain time and you have to put the right temperature on it to get it to rise and take it out. It’s just a complicated process.”

He determined it was a business he wanted to try. According to the US Department of Energy, wind power is expected to generate 113.43 gigawatts of electric power by 2020 and 404.25 gigawatts by 2050. By contrast, coal-fired plants generated 260 gigawatts in 2017.

“I just felt like I wanted to do something that was going to do well by doing good,” says Cashman. “I could have gone and done some more real estate. I could have done a lot of other different things. I just said to myself that I felt I could figure this out.”

“You can’t fake caring. People see it. If you’re running a family business like I do, treat them like family. Worry about them. And when there’s some success, share with them.”–Jay M. Cashman (BSBA’75)

Cashman wasn’t bequeathed his wealth or his business, but he did inherit his family’s entrepreneurial spirit. His ancestors—Irish and Italian immigrants who came to the United States starting in 1850—worked in trades, and several ran their own contracting and construction firms in the Boston area. After he got his driver’s license, the teenaged Cashman and his younger brother Jamie (BSBA’77) printed advertising flyers offering masonry and rubbish removal services to South Shore homes. “I always knew I was going to be in business one way or another. That’s why I went to business school,” says Cashman. “I come from a long line of ditch diggers and entrepreneurs. Being a successful businessperson was a family value.”

Cashman says organizational behavior was the most important class he took at BU because it taught him about effective working relationships. He also learned from the example of his grandfather, who ran a contracting business and kept laborers on the payroll during slow winter months.

“You can’t fake caring. People see it,” he says. “If you’re running a family business like I do, treat them like family. Worry about them. And when there’s some success, share with them. If we make a pot of money, we take some of the money and give it back to the people who made it.”

At Questrom, his entrepreneurial spirit found new outlets. When he arrived at BU in the fall of 1971, he noticed campus bulletin boards offering a variety of goods and services—and saw an opportunity. He decided to rent out the refrigerator his grandmother had just given him for his dorm room. “I put a price tag of $60 for the year.” Next, he started buying refrigerators wholesale for $45 each and renting them to students at BU, Northeastern, Tufts, and other colleges. He turned a tidy profit on rental fees and later sold the business. 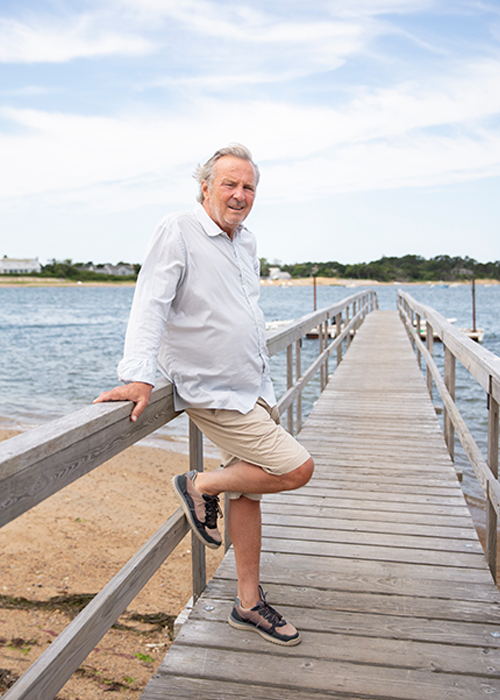 Along the way, Cashman built up his contracting company—he first incorporated as J. M. Cashman, Inc. in 1974—which today employs approximately 1,000 people in a range of units. There are heavy civil and marine construction divisions, as well as dredging units, with projects that include dredging millions of cubic yards of materials from Boston, New York, and New Jersey harbors to improve ship navigation; Cashman says the company is now the largest contractor in the country in both environmental and mechanical dredging. It builds prestressed concrete storage tanks, such as a 5.25 million-gallon liquefied natural gas storage tank for Fairbanks Natural Gas in Alaska.

Like most entrepreneurs, Cashman has had low points, too, times when he’s questioned his business and himself. He recalls driving with his brother to pick up a load of sand in the early days of his contracting business. “It was kind of a depressing day,” he says. “It was raining. I’m in the truck. And it didn’t seem like we were ever going to break out. And I remember that was kind of a defining moment.” Cashman told his brother that he was thinking of finishing the job, then quitting to become a carpenter. His brother encouraged him to give it another try.

“Eventually, things got better. We finished up the bad job we had. We collected our receivables and it was on to the next job.”

One of those jobs was to restore three portions of the Scituate, Mass., seawall that had been damaged during the punishing blizzard of 1978. “We made a fortune off that job when I was in my mid-20s,” he says. “There’ll be times that you’ll basically doubt your decision. Stick with it. Don’t drive the truck off the cliff. But give that extra punch.” Just as he did with wind power.

Despite his success, Cashman remains alert to opportunities. He and his wife Christy recently finished renovating Kilkea Castle, a 12th-century estate in County Kildare, Ireland, as both a second home and as a luxury hotel, resort, and golf club.

That project followed a desire to spend more time in a place they love to visit. On one of their stays, Cashman befriended a hotelier and became intrigued by the idea of owning his own property. Opportunity matched his interest in 2012, after an Irish economic downturn had made the castle’s price a good buy.

“One tenet of my business philosophy is that you basically make your money on the way in,” he says. “We buy wholesale, or we just don’t buy.”

Back in his home office, Cashman nods at the books that fill the shelves lining the high walls: hundreds of them are biographies of businesspeople. He likes to know how others made it.

“One of my uncles said, ‘Don’t try to invent the wheel. Just take the wheel that’s there and make it a little bit better.’ So, learn from what other people have done,” Cashman says. “You’ll find that in most people’s careers there was a breakthrough point. They were kind of going along and maybe doing OK, or maybe doing not so OK, and an event ends up happening. And if they weren’t in that place at the right time...they would have missed the opportunity.”