So Much for the Robocalypse

Innovation expert Iain M. Cockburn has heard all about the robocalypse: how artificially intelligent machines will displace many routine jobs. But he remains a techno-optimist. Cockburn, the Richard C. Shipley Professor in Management, believes that AI has the potential to be an invention that spawns many other inventions and economic growth. His paper on the subject, “The Impact of Artificial Intelligence on Innovation,” written with colleagues from Harvard and MIT, was recently published by the National Bureau of Economic Research.

Everett spoke to Cockburn about his research—and how to tell if you’re doing work that might one day be nabbed by a robot.

Everett: You point out that AI has the potential to be a general-purpose technology—like an electric motor—that can be important to many industries. What do you see when you make that comparison?

Cockburn: You can potentially use these tools in many, many different contexts. It could be medical diagnosis, it could be fraud detection inside a bank’s databases. You turn on the news every day, and you see a new and exciting application. Often, it’s a problem involving classification. Is this a fraudulent transaction or is it not? Is this a person you should extend credit to or is it not?

And with access to very large amounts of data and these breakthroughs in the technology, you can train one of these systems—or it can learn to perform a task—to outperform humans. And because there are many, many kinds of business activities that have that flavor, you can expect these tools to have a very wide range of applications. It’s hard to think of any part of the economy that is not going to be impacted.

What a lot of people are sitting up and noticing is that this form of automation or replacement of human work with a computer is now percolating into areas that have been largely unaffected by previous technological revolutions. Take legal services. It turns out that by using this technology, you can create systems that will do a lot of low-level legal work, like scanning contracts, reviewing contracts, or reviewing documents.

“The boundary between what requires human intervention and what is just an algorithm is moving very rapidly.”

If you can create a computer system that will do it, then some of those jobs are likely to be displaced. Credit review on a bank loan will be another one. The boundary between what requires human intervention and what is just an algorithm is moving very rapidly.

A lot of people wonder, “What about me?” For instance, among the many reports out there, I noticed that the Associated Press uses an AI application to produce articles on companies’ quarterly reports.

People need to ask themselves, “How much of my work involves repetitive, cognitive tasks?” Your example with these earnings reports is a good one. So, if somebody is a writer, their job is they look at a filing with the SEC, and then they scan down for the same kind of information and basically fill out a template. It used to be very, very difficult for machines to look at even quite structured documents like a quarterly earnings report and pull out the relevant information. Now, these systems are able to do that. So, you should ask yourself how much of what I do—even if it’s a high-order cognitive task—how much am I just repeatedly doing the same thing, particularly if it involves pattern recognition or classification; you know, is this a fraudulent transaction or not? Those are things that are likely to be taken over by these automated systems.

Then there’s a second question: “If I didn’t have to spend so much of my day doing that, what could I be doing that involves imagination, insight, critical thinking?” So, for some people, their jobs are going to get much more interesting.

For some people that will be an exciting proposition. For others, it might feel a bit threatening.

Yes. We just don’t know exactly because all economists and business researchers are staring at this problem; they’re still trying to wrap their arms around what is going to be the impact.

I tend to fall on the side of the techno-optimist school. In the past, we’ve had these very disruptive technologies. Electric power came in and a lot of activities in the economy of the late 19th and early 20th centuries were powerfully disrupted. A lot of people lost their jobs. On the other hand, whole new kinds of industries and products appeared, new kinds of jobs were created. 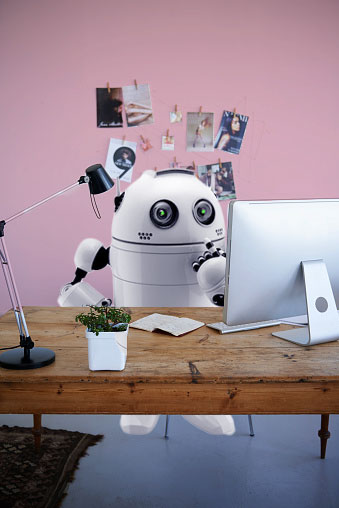 The electrification of the economy brought with it massive increases in productivity and well-being for everybody. If AI is as powerful and disruptive as we think it might be, then my own view is that it will usher in an era when a lot of people, especially in white-collar jobs, may get displaced. Jobs may disappear in the short run, but in the long run, these tools will create more and better jobs for more people.

There is a contradictory view. There are some people who are very worried. Economists tend to look at the long run and see that inarguably, the world is better with electric power than without it. But that’s cold comfort for someone who was doing perfectly well in looking after their family using steam or water power or horses.

Can you think of an example where AI is a catalyst for changing an industry?

One of the problems we spend a great deal of money on as a society is trying to discover new drugs. The pharmaceutical industry spends tens of billions of dollars a year on searching for new drugs. At least some companies think that we’ve got a better solution to this problem by training machines to identify potentially biologically active compounds rather than what is still fundamentally trial and error, running hundreds of thousands of experiments and looking for a hit.

This is still early stages, but some of these companies’ efforts sound exciting, like Atomwise, which we talk about in the paper. It uses neural networks to predict how candidate molecules for drugs will work. You can see that could be very powerful in transforming what’s a very expensive and risky business to be in.

It’s an open question, I think, as to how many other kinds of research activities have the same features. But a lot of work goes on in universities and industrial R&D labs and follows these kinds of classifying and prediction activities.

When will we know, or is there a certain indicator or tipping point that you can sense, when AI will become an especially important method of invention?

I think if we see rapid takeoff in areas of science and engineering that seem to have been stagnant, that will be a powerful signal. Think about the internet. At some point in the mid-1990s, it was becoming clear that, boy, this is going to change everything. Bill Gates wrote a famous memo about it. We could see at that point the explosion in start-up companies and the arrival of not just the web browser, but whole new categories of software, and software products, and the dawn of e-commerce.

So, there’s an explosion of new businesses, new product ideas, many of which will, on the face of it, be crazy and useless. That’s a powerful indicator. Surges in the number of patents being filed in previously dormant areas of technology. And sad to say, another diagnostic will be large-scale job losses. If you see banks suddenly starting to lay off lots of people, it’s bad news in the short run for people who are losing their jobs, but very often, these things are a signal that the nature of financial services is about to go through a huge change.

My advice would be to look for the kinds of education and work experience where you know you’re going to be able to use these new tools to leverage your creativity, imagination, and insight, and try to avoid becoming highly expert on a set of activities that are routine and repetitive cognitive tasks.