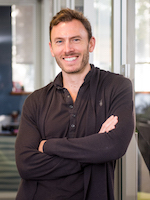 Dino Pinterpe Christenson is an Associate Professor in the Department of Political Science. He is also an Institute Fellow and Faculty Affiliate at the Hariri Institute for Computational Science & Engineering and sits on the Steering Committee for the Data Science Initiative. In 2010, he co-founded the Department’s first research workshop, and in 2016, co-chaired the inaugural Day of BU Data Science (BUDS). From 2012-15, he was a Junior Faculty Fellow at Hariri, and in 2018, a Visiting Scholar at the Institute for Quantitative Social Science at Harvard University. Prior to academia, he worked in politics as a public affairs consultant and as a campaign advisor.

Christenson studies American political behavior and quantitative methods. His recent work explores presidential voting behavior, campaign dynamics in primary elections, the coalition behavior of interest groups, and public opinion and the media environment of institutional outcomes. His articles have appeared in American Political Science Review, American Journal of Political Science, Political Analysis, Political Behavior, and Social Networks, among other outlets. His work has received the Editors’ Choice Article Award from Political Analysis, the Best Article Award by the Law & Courts Section of APSA, as well as the Best Article Award from Political Research Quarterly. He is coauthor of The Myth of the Imperial Presidency: How Public Opinion Checks the Unilateral Executive (University of Chicago Press, 2020) and Applied Social Science Methodology: An Introductory Guide (Cambridge University Press, 2017). His work has been supported by grants from the National Science Foundation, the National Institutes of Health, the Hariri Institute, and the Dirksen Congressional Center.