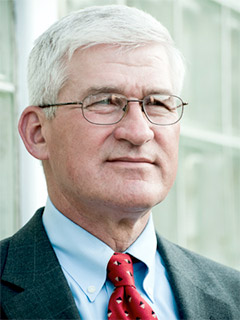 Andrew J. Bacevich is Professor Emeritus of International Relations and History at Boston University. A graduate of the U.S. Military Academy, he received his PhD in American Diplomatic History from Princeton University. Before joining the faculty of Boston University, he taught at West Point and Johns Hopkins.

Bacevich is the author of  America’s War for the Greater Middle East: A Military History (2016) and Breach of Trust: How Americans Failed Their Soldiers and Their Country (2013). His previous books include Washington Rules: America’s Path to Permanent War (2010); The Limits of Power: The End of American Exceptionalism (2008); The Long War: A New History of US National Security Policy since World War II (2007) (editor); The New American Militarism: How Americans Are Seduced by War (2005); and American Empire: The Realities and Consequences of U. S. Diplomacy (2002). His essays and reviews have appeared in a variety of scholarly and general interest publications including The Wilson Quarterly, The National Interest, Foreign Affairs, Foreign Policy, The Nation, and The New Republic. His op-eds have appeared in the New York Times, Washington Post, Wall Street Journal, Financial Times, Boston Globe, and Los Angeles Times, among other newspapers.

In 2004, Dr. Bacevich was a Berlin Prize Fellow at the American Academy in Berlin. He has also held fellowships at the Paul H. Nitze School of Advanced International Studies, the John F. Kennedy School of Government, and the Council on Foreign Relations.