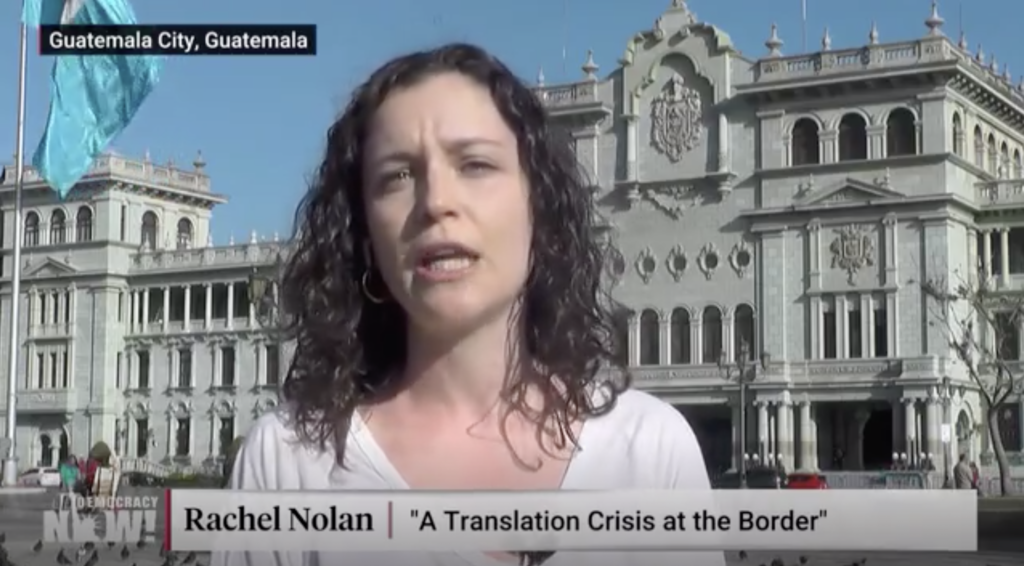 A research based essay by Rachel Nolan, Assistant Professor of International Relations at Boston University, in The New Yorker (January 1, 2020) was the basis of a followup story in Democracy Now! on the deportation of Mayan-speaking refugees seeking refuge.

In the January 17, 2020, broadcast Nolan was interviewed by journalist Amy Goodman on this subject. An excerpt from the interview:

“Mario does not speak Spanish very well. Like many Mayan-language speakers in Guatemala, he speaks enough to go to the store, maybe sell tomatoes in the market, but not to navigate a complex legal interview. And so, like many indigenous-language speakers at the border, he was afraid and was answering yes to many of the questions that he was asked.

And so, in Guatemala, you do pay a very small fee to get a birth certificate. So when he was asked had he paid for the birth certificate of his daughter, he answered yes. And the Border Patrol agent used that answer as supposed evidence that he had paid for a false birth certificate, which was not true. And on the basis of that, he was separated from his daughter for several months. And because Mario only speaks Mam, he was not able to understand what was happening and why his daughter was separated from him. Again, Mam is his primary language, and he speaks very little Spanish, if at all. So he was answering yes, yes, yes, to try to ingratiate himself to the authorities, to try to control was what was clearly a very fearful situation.”

Details on the full report can be found here.

Prof. Nolan’s original article on The New Yorker can be read here. A report on it, here.

Rachel Nolan is a historian of modern Latin America and an Assistant Professor at the Pardee School of Global Studies at Boston University. Her research focuses on political violence, Central American civil wars, childhood and the family, historical memory, and U.S.-Latin American relations. Dr. Nolan holds a B.A. in History and Literature from Harvard University and a doctorate in Latin American and Caribbean History from New York University. More on her, here.