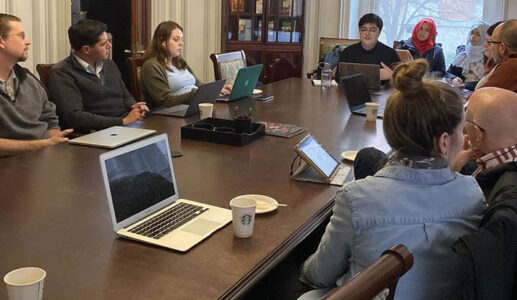 Hafsa gave a talk entitled “Queered Aspirations: Religious Identity among LGBTQ+ People in Urban Pakistan.” Hafsa explored how identifying as a delineated queer identity, such as lesbian, gay, or bisexual, is an emerging phenomenon in Muslim-majority and “Islamically governed” Pakistan.

The talk examined how young Pakistanis who have come to identify as under the LBGTQ+ umbrella understand their Muslim identities in the context of religious nationalism, and how their religious identities support, reject, and otherwise interact with their sexual orientation. In addressing this question, Hafsa uses ethnographic data on young, middle-class Pakistanis living in Karachi who identify as gay, lesbian, bisexual, and nonbinary or trans. Ultimately, Hafsa argues that young Pakistanis are required to move between, and therefore disrupt, the binaries of “traditional and religious” and “modern and secular” in order to build flexible aspirations in precarious times.

CURA hosts a yearly interdisciplinary Colloquium on Religion and World Affairs, in cooperation with the BU School of Theology. The Colloquium meets bimonthly throughout the academic year to discuss working papers on the chosen theme, either written by CURA Fellows or invited scholars from outside BU. CURA Fellows are selected from across the BU community during a competitive application period every spring. The Colloquium sessions are open to the general public, but all attendees are expected to read the papers in advance. The sessions focus on providing feedback and suggestions to the authors. Authors do not make a formal presentation but are able to engage with the audience and answer questions after the papers are discussed.

The theme for the 2019-2020 colloquium is “Religion and Identity.” The working papers will explore the ways in which religion creates, shapes, and interacts with individual and social identities. We welcome work that explores specifically religious identity as race, gender, sexuality, and nationality.