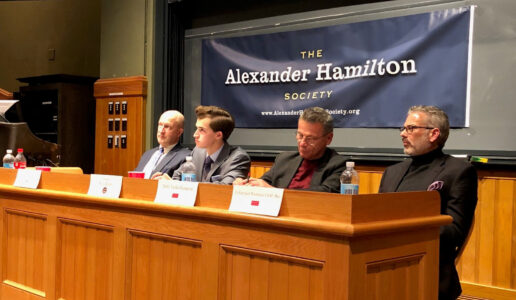 USAF (Ret) Lt. Gen. Jack Weinstein, Professor of the Practice of International Security at the Frederick S. Pardee School of Global Studies, and Amb. Vesko Garcevic, Pardee School Professor of the Practice of International Relations, spoke at a November 12, 2019  panel at Harvard University entitled “NATO’S Next 70 Years: Looking to the Transatlantic Future,” hosted by the Harvard Alexander Hamilton Society.

The discussion focused on NATO’s evolving role in the next 70 years and how the United States and Europe should continue to strengthen the transatlantic alliance. Other speakers on the panel included Ian Brzezinski of the Atlantic Council.

Garcevic and Weinstein both commented on President Macron’s statement that “NATO is brain death” and his “wake up” call for Europeans to create “the European true army” capable of protecting the European Union “from China, Russia and even the United States of America.”

Weinstein spoke about the military perspective of NATO and its global posture. He also raised questions regarding the reliability of NATO allies, the strength of the alliance and its purpose today.

Garcevic discussed the issue from the European perspective, examining whether NATO or the EU is in charge of the European security, and whether Europe can create its own army? He also outlined the structural, political and historical impediments to an EU army.