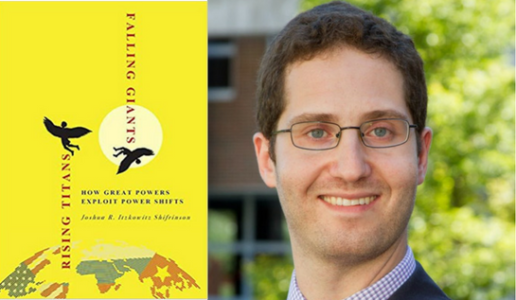 In Rising Titans, Falling Giants, Shifrinson focuses on the policies that rising states adopt toward their declining competitors in response to declining states’ policies, and what that means for the relationship between the two.

Shifrinson integrates disparate approaches to realism into a single theoretical framework, provides new insight into the sources of cooperation and competition in international relations, and offers a new empirical treatment of great power politics at the start and end of the Cold War.

Joshua R. Itzkowitz Shifrinson’s teaching and research interests focus on the intersection of international security and diplomatic history, particularly the rise and fall of great powers and the origins of grand strategy.  He has special expertise in great power politics since 1945 and U.S. engagement in Europe and Asia. Shifrinson’s first book, Rising Titans, Falling Giants: How Great Powers Exploit Power Shifts (Cornell University Press, 2018) builds on extensive archival research focused on U.S. and Soviet foreign policy after 1945 to explain why some rising states challenge and prey upon declining great powers, while others seek to support and cooperate with declining states.