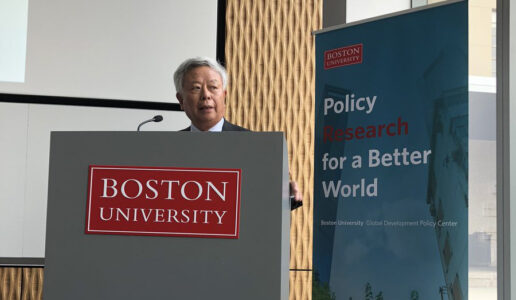 Jin Liqun is a a Chinese politician, banker, and professor who formerly  served as the Chairman of China International Capital Corporation, the Vice President of the Asian Development Bank, and the Vice Minister of Finance of the People’s Republic of China.

In the talk, held as part of the GDP Center’s Global China Research Colloquium, Liqun focused on multilateral approaches to development. He was introduced by Kevin Gallagher, GDP Center Director and Professor of Global Development Policy at the Pardee School.

“In the family of MDBs, we are learning from our sister institutions,” Liqun said. “We don’t think we should be a clone to these institutions no matter how wonderfully they are contributing. The most important contribution is to promote a multilateral approach for the 21st century.”

The GDP Center is a university-wide research center in partnership with the Office of the Vice President and Associate Provost for Research and the Frederick S. Pardee School of Global Studies. The GDP Center’s mission is to advance policy-oriented research for financial stability, human well-being, and environmental sustainability.