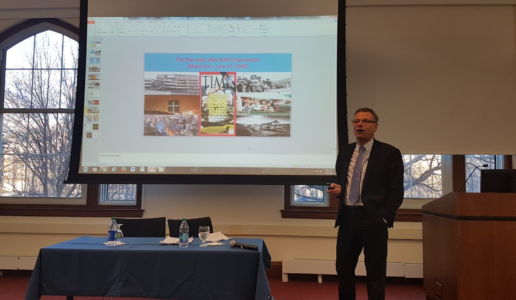 Ambassador Vesko Garcevic, Professor of the Practice of International Relations at the Frederick S. Pardee School of Global Studies at Boston University, spoke as part of the Mediterranean at Fenway Lectures hosted by the Institute of Eastern Mediterranean Studies atEmmanuel College on March 26, 2019.

Amb. Garcevic gave a talk entitled “The Demographic and Geopolitical Map of the Eastern Mediterranean: 20 Years Later,” that examined the 20th anniversary of the NATO intervention in Yugoslavia.

In his talk, Amb. Garcevic discussed how the intervention didn’t have the UN Security Council endorsement, and was legally questionable but was justified as the only mean to end the ongoing humanitarian crisis. He stressed that the intervention not only had an impact on the Balkans and Europe but also on global international relations.

Amb. Garcevic examined how for the first time since the fall of the Berlin Wall Russia vetoed the UNSC resolution –serving as a turning point in Russia’s relations with the West. This policy shift paved the way to a more challenging Russia we know today, according to Amb. Garcevic. His talk also covered how the bombing of Yugoslavia coincided with the first round of NATO enlargement since the end of the Cold War.

“If Moscow saw NATO as a challenge before 1999, since these two events, Russia has made it clear that it views NATO expansion as a security threat,” Amb. Garcevic said.