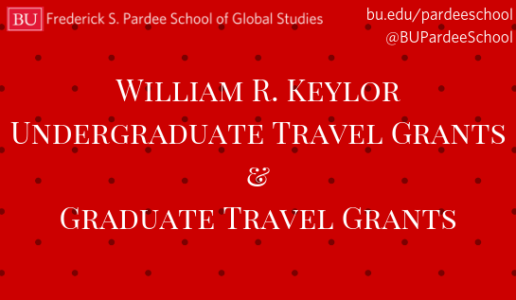 “As the Chinese saying goes: ‘It is better to travel ten thousand miles than to read ten thousand books’,” said Min Ye, Director of Undergraduate Studies and Associate Professor of International Relations at the Pardee School. “I hope our students at Pardee are well-read and well-traveled, because it is important to gain real experience – experience with languages, cultures, and societies very different from your own.”

Raina Kadavil has been working with Noora Lori, Assistant Professor of International Relations at the Pardee School, and plans to travel to Istanbul to conduct research aimed at addressing the problem of access to aid among urban refugees and will conduct focus groups and interviews with local and national nonprofits, NGOs, religious groups and community organizations that are working with refugees.

Daniel Gonzalez will travel to Washington D.C. to analyze the principle barriers to the development and deployment of renewable energy technologies in Latin America, and identify feasible solutions to overcoming these barriers from a policy perspective. He has been working with Kevin Gallagher, Director of the Global Development Policy (GDP) Center and Professor of Global Development Policy at the Pardee School, on meeting with experts who work with governments and companies in the region.

Hafzat Akanni aims to conduct a cross-cultural analysis between Jim Crow and Apartheid with the help of her faculty research advisors Fallou Ngom, Director of the African Studies Center at the Pardee School, and Zoliswa O. Mali, Director of the African Language Program at the African Studies Center. She previously organized a highly successful university-wide event that brought together minority students across schools, programs and disciplines.

Ziling Cheng’s undergraduate research project focuses on comparative studies on both Japan and China’s revitalization and promotion of cultural heritage to the international audiences and their relations with respect to diplomacy and economy. She plans to travel to Kyoto and stay in a monastery to experience firsthand the Japanese way of revitalizing and promoting tradition and culture. Her faculty research advisor on her project is Sarah Frederick, Associate Professor of Japanese and Comparative Literature and Associate Chair of the Department of World Languages and Literatures at Boston University.

Anna Ellis is working with her faculty advisor  Amb. Vesko Garčević, Professor of the Practice of Diplomacy and International Relations, on a research project aimed at bridging the gap between academic literature concerning the Eastern Mediterranean by exploring how changing geopolitical and regional security dynamics intersect in Cyprus, signalling a shift in the balance of power in the region. The project is not limited to the island itself, and aims to explore the influences of outside actors.

Graduate student research travel grants are also awarded through a competitive process, which encourages students to undertake path-breaking research around the world in order to further the Pardee School motto of advancing human progress.

“The research travel grants are an excellent opportunity for our students to hone their research skills through personal interviews and archival research that is not available online,” said Amb. Robert Loftis, Director of Graduate Studies and Professor of the Practice of International Relations at the Pardee School. “Our expectation is that this experience will enrich not only their master’s papers, but their overall educational experience.  I this opportunity will broaden their horizons for now and far into the future.”

Abbas Chaudhry plans to travel to the United Arab Emirates and Egypt to interview religious leaders as part of his research on how such leaders, as non-state actors, engage in discussion, debates and discourses on the issues of religious identity, religion in the modern world and religion and state. He hopes to contribute to the understanding of religion in international affairs through an analysis of the transnational role played by religious leaders. He is working with Robert Hefner, Professor of Anthropology and International Relations at Boston University.

Avery Hall plans to build on the fieldwork he completed with his faculty research advisor Julie Klinger, Assistant Professor of International Relations, in the Brazilian Amazon during the summer of 2018. He plans to “reestablish our understanding of how indigenous groups vie for legal representation, from the regional level to the international.” Avery will travel to Brazil to build on the relationships he made while working with Klinger.

Joseph Stuckey, also working with Klinger, will travel to London for archival research in the National Archives and Martime Museum where he will seek access to records related to the East India Company’s development.

Hoory Minoyan, working with Professor of International Relations and History Houchang E. Chehabi, will conduct primary research in Armenia for a post-conflict diaspora community that has emigrated back to its country of origin and how that affects the sense of Armenian identity. She will interview Syrian-Armenians in Armenia to discuss their “firsthand experience in the local integration process and the impact it has had on their shift of identity from diaspora-Armenian to local Armenian.”

Roseanna Garcia will examine the human rights issues that are addressed in NAFTA and the new USMCA and recommend policy changes to improve human rights practices in the U.S.-owned factories on the Mexican side of the border. She is particularly interested in the role that NGOs that self-identify as Christian play in promoting rights in the maquiladoras.  Her research will involve two visits to San Diego and Tijuana: the first to gather information and data through interviews and the second to consult with Mexican works and others to gain their reactions to her policy proposals. She is working with Associate Professor of History and Research Associate for the BU Institute on Culture, Religion, and World Affairs (CURA) Jeffrey Rubin.

An Le’s research will attempt to answer the question of why rising powers become belligerent. Working with Professor of International Relations  and Director of the Center for the Study of Asia (BUCSA) Thomas Berger, he will explore why conventional literature speaks to conflicts occurring between rising powers and status quo powers, but little has been written on when, how and why rising powers choose to display belligerence. He will travel to Washington D.C. for meetings with think tanks and to conduct archival research.