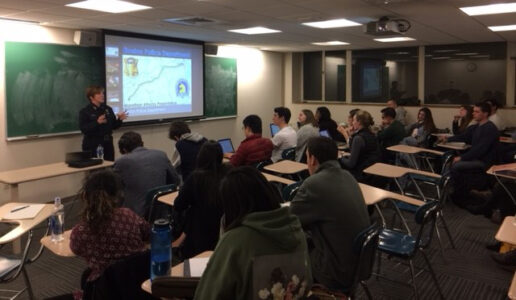 Nee shared her unique perspective on one of the most high-profile homeland security attacks in recent memory.  A 33-year veteran of the Boston Police Department (BPD) prior to assuming her position at BU, Nee was a detective assigned to Boylston Street when the two bombs exploded.  She immediately gave aid to those injured by the first blast, and noted that this work was so intensive that she did not even realize that a second bomb went off in her vicinity.

In her talk, Nee summarized the major points of the Boston Marathon Bombing, the investigation’s trajectory, its culmination in Watertown, and the most important lessons learned from the experience.  In addition to the well-known aspects of the Marathon Bombing, Nee touched on many subtle issues, such as the potential hazard posed by uncoordinated police self-deployment and the beneficial consequences of halting the race at Kenmore Square.  She also cited volunteer medical personnel who bravely and immediately responded to aid the victims, despite concerns of additional bombs. Nee said she also felt that it was fortunate that many BPD officers had been given updated first aid training on the use of tourniquets prior to the attack.

After the presentation, Nee fielded numerous questions from the students on a variety of matters, ranging from inter-agency operability, chains of command, the danger of “lone wolf” attackers, and the emerging threat of weaponized drones.

“Chief Nee’s presentation was incredible.”, said Jack Morgan (Pardee ’19). “Her description of the immediate response to the bombing was riveting, and her commitment to community outreach and effective policing admirable. It’s great to have someone like her at BU.”

Next week, IR 516 students will meet with Michele McPhee, the author of Maximum Harm: The Tsarnaev Brothers, the FBI, and the Road to the Marathon Bombing, and Peter K. Levitt, an Assistant US Attorney in Boston who worked on elements of the case.